Jumps in Figure Skating Content from the guide to life, the universe and everything 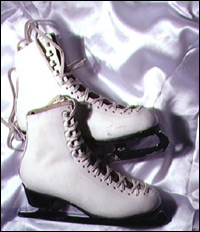 There are many different types of jumps in figure skating1, and to the uninitiated spectator, they can all look more or less the same. This overview will not focus on what are known as 'dance' or 'positional jumps', which add flair to choreography, but instead on the 'rotational jumps' which more heavily contribute to scoring in competitive figure skating. Some of these jumps are more difficult than others, but none would be considered easy for the average person. After all, most people would have a hard time jumping off the ground and rotating around several times in the air, let alone doing it on the ice and landing cleanly!

The main differences between the jumps revolve around these factors:

In general, most skaters perform their jumps with counterclockwise rotations, landing on a right back outside edge. However, some left-handed skaters will perform all of their jumps clockwise; there are also skaters who perform some jumps in one direction, and others in the opposite. For consistency, the edges described here will refer to counterclockwise jumps unless otherwise noted.

The difficulty of a jump can be increased by the complexity of the footwork2 leading into the jump, but such footwork does not affect what the jump is called.

Jumps from a Backward Outside Edge

A counterclockwise jumper will enter these jumps from a right backward outside edge, landing on the same foot as the entrance edge:

A counterclockwise jumper will enter the next jump from a left backward outside edge, landing on the opposite foot as the entrance edge:

A less commonly performed jump is the toeless lutz, which uses the same edges as the lutz, but without the toe pick assist. This jump is quite difficult to perform with more than one revolution, and is generally not seen in competition.

Since most jumps end in a right backward outside edge for counterclockwise jumpers, only jumps that take off from such an edge can generally be used as the second jump in a combination. This is why you will see a 'triple lutz, triple toe' in competition, but not a 'triple toe, triple lutz'. The exit edge of the first jump needs to move seamlessly into the entrance edge of the second, so most combination jumps end in either a loop or a toe loop.

Jumps from a Backward Inside Edge

A counterclockwise jumper will enter these from a left backward inside edge, and land on the opposite foot as the entrance edge:

Two jumps no longer commonly observed in competition are the walley and the toe walley, both of which take off from a backward inside edge and rotate against the edge. A counterclockwise jumper would enter these jumps from the right backward inside edge, landing them on the right backward outside edge. The difference between them is that the toe walley is a toe-assisted jump and the walley is an edge jump.

Jumps from a Forward Edge

The only jump from a forward edge that's commonly seen in competitive figure skating is the axel; a counterclockwise jumper would enter the axel from a left forward outside edge, and land on a right backward outside edge.

A rarely seen jump is the inside axel, which takes off from a forward inside edge, and rotates against the edge.

Putting It All to Use

When you're first beginning to tell the difference between figure skating jumps, it can help to have a VCR or DVR, in order to be able to replay jumps in slow motion. Remember, the main things to focus on are the:

Keep it all straight, and next time the World Championships roll around, you'll have the opportunity to holler 'What a flutz!' with the rest of the fans.
1Relatively similar jumps exist in competitive roller skating, but the techniques are somewhat different.2An intricate pattern of steps and turns, ideally executed with great speed and precision.3Skating history was thus made by Kurt Browning at the 1988 World Championships in Budapest, Hungary.4Depending on which side of the pond you are on, this is pronounced either as 'sal-ko' or as 'sow-cow'.5The history maker here was Miki Ando, at the 2002 Junior Grand Prix Final in the Netherlands.