'Only Connect' - the Television Quiz Show Content from the guide to life, the universe and everything 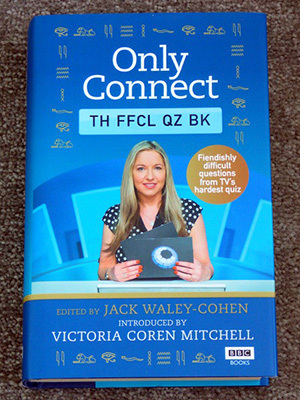 Only Connect is a quiz show in the UK that requires contestants to use lateral thinking to find connections between seemingly random items. This is fiendishly tricky but made surprisingly compelling by not only the variety of topics that inspire the questions, but also the host Victoria Coren Mitchell and her witty asides and amusing monologues.

Victoria Coren Mitchell trained as a journalist but came to fame as a poker player - in 2006 she became the first female winner of the European Poker Tour (and she went on to become the only two-time winner of the European Poker Tour when she won again in 2014). She appeared on television in the show Late Night Poker and the production company subsequently invited her to host the pilot of a quiz show they were developing.

Filmed in Cardiff and first broadcast on BBC Four in 2008 the title for the programme is taken from a line1 in EM Forster's novel Howard's End (1910). This established its credentials as a quiz for people who are curious about the world and interested in the more obscure aspects of it.

Its credentials as a quiz for quizzing's sake are further emphasised by the fact that there is no prize for winning an episode - the prize for winning the whole series is simply a small trophy containing the Only Connect Logo. There is no audience in the studio, so the only applause that occurs is when Victoria and the contestants congratulate each other.

In the first three series, questions were labelled with Greek letters (α to ζ) but there were apparently complaints about that being a 'pretentious gimmick'. In response to the feedback, in subsequent series questions have been labelled with Egyptian hieroglyphs (Lion, Water, Two Reeds, Twisted Flax, Horned Viper2 and Eye of Horus) - that showed the quiz was not taking itself too seriously, and captured the interest of more viewers. By 2014 its popularity was such that it moved to BBC2, a channel that is the home of a variety of programmes with an educational element, including intellectual quizzes such as University Challenge and Mastermind.

In spite of (or perhaps because of) its relative obscurity on BBC Four and BBC2 and its resulting geeky reputation, the show has played host to a number of people who have enjoyed similar fame elsewhere. Mark Labbett won Series 2 with his team 'Rugby Boys' and went on to become known as 'The Beast' when he demonstrated his quizzing prowess against contestants in The Chase TV quiz show in the UK, USA and Australia. Fellow 'Chaser' Jenny Ryan won Series 3 with her team 'Gamblers'. Various University Challenge alumni have appeared, including Gail Trimble and Alex Guttenplan. The QI Elves (the question setters behind the 'Quite Interesting' TV programme) competed in Series 10 and returned for a special episode in 2018.

Each episode has the same structure. There are two teams of three players. The team members are introduced by Victoria, and she mentions an obscure fact about each of them, such as their interest in postboxes or their involvement in battle re-enactment. The team name describes the connection between the players - examples include 'Birdwatchers' ('people with a passion for ornithology'), or 'Poptimists' ('pop lovers with a positive outlook and a fondness for puns').

There are four rounds. The first round is all about spotting the connections between four clues that are revealed one by one. As well as four text-based questions in the round there is a Picture Question3 and a Music Question4 to challenge contestants even more. Players get five points if they can guess the connection from just one clue, three points for two clues, two points for three clues and one point if they guess correctly after seeing all four clues. For example, Clue 1 might be 'Whale', Clue 2 'Petunias', Clue 3 '42' and Clue 4 'Ford Prefect' so the connection is The Hitchhiker's Guide to the Galaxy.

The second round is the Sequences round - players not only have to work out the connection but they also have to deduce what is the fourth term in the sequence. For example they might see 'So Long and Thanks for all the Fish' in Clue 1, then 'Life, the Universe and Everything' in Clue 2, and Clue 3 would be 'The Restaurant at the End of the Universe'. To win the points, the contestants would need to realise that this is the first four books in the Hitchhiker's Guide to the Galaxy 'trilogy in five parts', in reverse order, so the fourth term in the sequence would be 'The Hitchhiker's Guide to the Galaxy'. There is always a Picture Question in this round, but a Music Question only appears sometimes - when a Music Question does appear, Victoria prompts the contestants to sing the answer once it is revealed5.

The third round is The Wall, where 16 items are mixed up on a digital wall and contestants have to sort them into four groups of four. The groups might be related via word play, popular culture, geography, or one of many other factors, and the round is made even more tricky by 'red herring' clues that could fit into more than one group.

The fourth and final round is the 'Missing Vowels Round', where contestants are given the connections and have to identify phrases that have had their vowels removed. For example the connection might be 'Science Fiction Books' and the first clue might be THHTCHH KRSGDT THGLXY, so the answer would be 'The Hitchhiker's Guide to the Galaxy'.

Each episode ends with a monologue by Victoria musing on random topics such as the (fictional) antics of the question setters Jack Waley-Cohen and David McGaughey, or the (imaginary) programme (involving a Michael Portillo-related pun) that will be broadcast after Only Connect. Here is an extract from Series 14 Episode 17, 11 February, 2019:

I was just thinking... Only Connect... It's about friendships, relationships, networks, inclusivity, really, and I was thinking: if we could spread this message of 'connectivity in a bigger way' we could make the world a better place. And then I started thinking: is this the sort of thing that David Icke started thinking during Grandstand that time? Am I starting to imagine I'm some sort of messiah? Am I some sort of messiah? And then the buzzer went. Goodbye!