Geography of Northern Ireland Content from the guide to life, the universe and everything 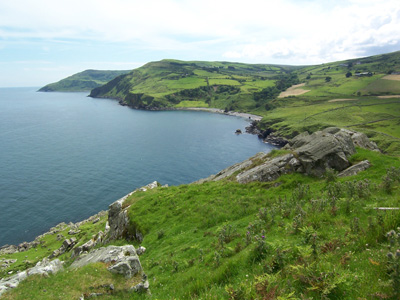 Northern Ireland consists of the six counties at the northeast corner of Ireland. At the time of partition in 19211, Antrim, Armagh, Down, Fermanagh, Londonderry and Tyrone either had a Protestant majority, or in the case of Fermanagh and Tyrone more or less parity with the Roman Catholic community. These counties had all been part of the ancient Province of Ulster, which also included Donegal, Cavan and Monaghan. These last three, with Catholic majorities at the time of partition, became part of the newly-independent Irish Free State (now the Republic of Ireland or Éire).

At the centre of Northern Ireland is Lough Neagh, the largest lake in the whole of the United Kingdom. Legend has it that Finn MacCool (a celebrated hero of Irish mythology) created this lake as well as the Giant's Causeway.

Five of the counties of Northern Ireland have an inland coast on Lough Neagh. Clockwise from Belfast and the Lagan Valley they are Down, Armagh, Tyrone, Londonderry and Antrim. Fermanagh is the only county not to border Lough Neagh, but makes up for it by exclusively containing Northern Ireland's own lakeland based around Upper and Lower Lough Erne, which dominate the geography of that county.

Despite its name, Northern Ireland does not contain the most northerly point of mainland Ireland - this is Malin Head in Donegal. So it is possible to travel north from Londonderry and end up in 'the South'.

Surrounding Lough Neagh is a high plateau, but each of the counties is hilly and mountainous. The highest peaks are in the Mournes which dominate the landscape of County Down. Most of Down is drumlin fields left after the glacial retreat, but the pinnacles of granite to the south tower over the rolling countryside. On a clear day these can be seen from the hills surrounding Belfast.

The Sperrins are the next highest mountains and dominate County Londonderry. Gold has been found in these mountains, but not enough to prompt a gold rush. These more rounded peaks contain Northern Ireland's highest main route between Belfast and Londonderry through the Glen Shane Pass.

Antrim rises to a higher level basalt plateau from the banks of Lough Neagh with many rivers flowing west into it. However, on its sea coast the plateau suddenly drops off again as this is the edge of a glacial valley which divides Ireland from Scotland. The plateau is cut through, often spectacularly, by rivers in the deep valleys which give this area its name: the Glens of Antrim. To the north are a variety of basalt columns which stretch along the coastline and form the Giant's Causeway. The coastal road in Antrim is spectactular for the variety of geological features along its length. Even if you aren't a geologist the sheer majesty of their beauty is inspirational.

The main rivers which flow through Northern Ireland are the Bann and the Lagan. The Bann rises in the Mournes in County Down, then flows north into Lough Neagh and out at the northwest corner, on through Coleraine , eventually flowing into the Atlantic Ocean near Portstewart. Also rising in the Mournes is the Lagan, which also follows a northerly track towards Lough Neagh before leaving the central plateau, turning sharply to the east towards Belfast. The other main rivers with industrial importantance are the River Foyle which serves Londonderry, and the Bush, on which the Bushmills distillery is situated. Many of the other rivers also have or have had some textile or grain milling along their banks.

There are many pseudonyms for Northern Ireland so here's a brief look at them and how they came into being: