Appearing on a TV Quiz Show Content from the guide to life, the universe and everything 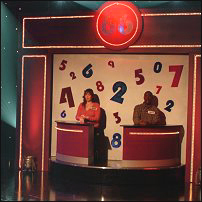 The TV quiz show has become a regular feature in scheduled broadcasting across the world. Special 'celebrity' versions do exist, but the normal day-to-day show relies on a plentiful supply of willing victims from members of the public. If you'd like to join them, here is some advice and guidance.

First up, choose what quiz show you'd like to take part in. If it's the prospect of winning some money that attracts you most, you'll be drawn to something like Who Wants to be a Millionaire or Greed, where there is a large cash prize up for grabs. On the other hand, if it's the kudos of having your knowledge recognised, then University Challenge or Mastermind may be more up your street - there's no prize money on offer, but you get a lovely crystal bowl to show off. Or maybe you'd be happy with the Blankety Blank cheque book and pen that all contestants won on that programme. Dare you face the terrifying Anne Robinson1 in The Weakest Link or would you prefer to deal with the cuddly presenters of Countdown? You may be happy enough to enter solo, or you may prefer the camaraderie of some friends or family, in which case you'd opt for Eggheads or Family Fortunes. Does the prospect of seeing yourself on screen fill you with dread, and would you be more comfortable being heard but not seen - going instead for a radio quiz?

Once you've decided which show to go for, you need to find out how to apply. Look out during the end credits of the programme, either for details on how to enter, or for the production company's name. Most programmes have a website, and entry details will be on there. You can then contact them for information on whether or not contestants are currently being sought, and get hold of an application form if they are (or put your name on a waiting list for the next series). Some shows are more popular than others, and there can be a long wait time between applying and appearance. Go for shows that have a large through-put of people on a daily basis (such as Fifteen to One, instead of those that need just one or two people per week.

Yes, there will be a form to complete. There's always paperwork! At the very least the production team need to know your name and how to contact you, but the form is also used to capture some other details about you - job, hobbies, ambitions etc. A television programme exists to be entertaining, and part of this entertainment value comes from the host's interaction with the contestants, so this is valuable material. Make sure that what you put down is reasonably truthful, that you're happy enough to talk about it on air, and try to make it interesting. But keep in mind that your mother will be watching the aired broadcast. Expect to find questions like 'what's the strangest thing you've ever done?', or 'what do you plan to do with the prize money?' Some shows may also require you to complete a police check.

There will often be a first stage elimination or selection round. This can be carried out over the phone by an overworked and underpaid researcher, and might be some simple general knowledge questions. The researcher will not only be marking your responses, but will also be judging your chat-ability - would you be able to handle chatting with the host, or do you give one-word whispered answers to questions? Again, remember that a television programme is looking for bubbly, smiling, shiny, happy people, rather than serious geeks, so it helps to be cheery and warm when talking to the researcher. Some would-be contestants claim that they have been rejected at this stage for being too clever. For other shows, the initial stage might be a premium line phone call - set your limit of how much you're allowing yourself to spend on these calls, and stick to it. Note that you are unlikely to meet or speak to the on-screen talent until the actual recording, which is probabaly a relief.

Most TV shows will have an audition stage - this is to see if you are right for the show, regardless of how impressive your knowledge is. Yup, nobody said life was fair. Don't expect the same high tech gizmos and electronic scoreboards that you see on telly - the audition scoreboard will probably consist of a flipchart and a post-it note. On the plus side, it may well take place in a venue such as a hotel near where you live. Your photo will be taken, and also quite possibly a camera test. The key to getting through this section is to ignore the camera, and talk as naturally as possible to your interviewer. Smile frequently, don't look directly at the camera unless told to do so, and don't forget to project that bubbly natural personality that they're after. Eyes and teeth, love, eyes and teeth!

Revision time! If there's a specialist knowledge round, make sure you're up to speed with your subject. For general knowledge, it can be more difficult to revise, but it is wise to ensure that you know what common acronyms like NATO2 and OPEC3 stand for, while the ability to list all the US state capitals will make you feel more confident (as well as being a useful party trick in your post-TV-appearance existence). Get some quiz books and let friends and family test you. Watch as many episodes of your chosen show as you can, and see what tactics work: on The Weakest Link, for instance, contestants who don't know an answer but who calmly say 'Pass', or who confidently say something, anything (even if it's wrong) will not draw attention to themselves as much as those who faff and um and er before giving their answer (even if it's right). Peruse forums set up by and for quiz fanatics, which can be a useful source of ideas and advice.

You've successfully got through your audition, and it's the day of the recording in Capital City! Television studios are big and confusing places, particularly the warren of rooms behind the scenes - try not to let the size intimidate you. In the green room you will meet your fellow contestants. It's usually wise to be nice to these people, so brush up on your small talk rather than trying to psych them out. The food will not be lavish - expect a plate of sandwiches and tea/coffee. Alcohol may be available, but ask yourself whether you want to drink before your big moment - some people will claim it helps them relax in an undoubtedly tense situation, others prefer to have their faculties at 100%. The crew will help you to the right place at the right time - do be sure to thank them and smile politely. OK, so they're only doing their job, but any time you are appearing in public, remember that someone is looking after the way you are lit, the volume of your mike, and where the camera is focused. It is in your own best interests to have these good folks on your side.

Clothes and make-up - you'll be asked to bring a choice of two, three or even more outfits to wear. This allows the production team to have a variety of colours, and not end up with a row of people all wearing blue. Smart casual is usually the look to go for, if anyone knows what exactly that is. Some colours look drab on television - white and black particularly - and the strobing effect of fine stripes is well known, so these should be avoided. A safe bet for ladies is a comfortable, good fitting (but not too clingy) top in an unpatterned bright green or turquoise, with either an interesting piece of jewellery, or some beading or embroidered detail on the top itself (this stops you fiddling with a necklace or scarf). A good fitting bra will help you feel confident - make sure there's no revealing lacy straps or unwanted nipple show-through. Your bottom half will not be seen as much, so comfy shoes (you'll be standing around a lot) and plain trousers are a good choice. For blokes, a smart shirt worn without a tie looks good, preferably one that won't show sweaty underarms too much. (You will remember the extra-strong anti-perspirant, won't you?) Ties and jackets look too formal, T-shirts look too scruffy. Brand names, football shirts, offensive slogans etc are not going to get airtime. And you will have your make-up done by professionals4. The make-up team will know what looks best under the television lights, and this is usually a lot brighter and bolder than normal streetwear, so trust their judgement. However, if you have an allergy you can bring your own foundation (for example).

You may have some expenses covered, so make sure you keep receipts for car parking, train tickets, etc. Do check with the research team beforehand, though, what will and won't be covered.

During the recording itself, remember that the camera might be on you at any time - don't pick your nose or try to clean out your ears. If there's an audience, decide whether you want your friends and family there for moral support, even though you'll not get much chance to speak to them. And Don't Panic!

If you did well - congratulations! The cheque will be with you very soon. If, however, you've been booted off, you will go over and over in your head what went wrong. Very often, it will have been one Killer Question, where the answer was obvious to everyone else playing, to the audience, and viewers watching at home yelling at their screens, but which you got wrong (like saying there are three pieces in a twinset). If you find yourself stuck on an answer it can be useful to mentally go through the letters of the alphabet, as that can trigger the right response. Beware of the 'Don't think of an elephant!' phenomenon - if the question asks you for a current comedian, and your brain plucks some guy from the 1970s (Mike Yarwood, say), you could well find yourself unable to think of anything else.

For your own sanity, do a post-mortem and trace through your thought processes, so that you can rationalise why you gave the answer that you did. If you can't - well, accept that under the time pressure, and the studio lights, and the gaze of the host, your mind went blank. It happens to everyone.

Watching your 15 minutes of fame is a great excuse to invite some friends around for a few drinks and a laugh. You can choose whether or not to tell them the outcome, although the television company will probably ask you to keep it secret, and it's definitely more fun for them to watch if they don't know. Try not to be too big-headed if you did well - accept compliments graciously, and be ready for a lot of teasing!

1Or her looky-likey on versions outside the UK. 2 North Atlantic Treaty Organisation.3Organisation of Petroleum Exporting Countries.4'Hurrah!' say the girls, while the fellas groan in unison.