John Kettley - Weatherman (and people mentioned in the same song) Content from the guide to life, the universe and everything 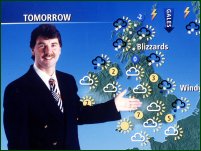 In 1988, four young lads from Sunderland known as 'Tribe of Toffs' had what might generously be referred to as a 'novelty' hit with a song entitled 'John Kettley is a Weatherman'. In it, they listed a range of contemporary celebrities (mostly C-list or lower) with rhyming attributes ranging from the believable to the downright bizarre. These days, people listening to the song may be somewhat baffled at names that exhausted their popularity some 15 years ago; the answers are (nearly) all here.

Ooooh...Ayrton Senna's got the voice of a tenor

Without a doubt the best racing driver of his time, and regarded by many as the best of all time, Senna won three Grand Prix championships. His temperamental and fiery nature made him a man to be feared on the track, and his rivalries with Alain Prost brought Formula One into the nineties as a riveting spectator sport. Tragically, Senna was to lose his life in a crash at San Marino's Imola circuit in 1994, an incident that was to instigate a safety revolution in the sport. Renowned for being a quiet man off the track, it is thought unlikely that he ever sung tenor.

Ever since the early 1980s, Peter Snow has been the BBC's face of popular politics. His bouncy enthusiasm — especially on election nights, where the 'swingometer' won him fame1 — and TV-friendly persona have endeared what might be an otherwise dull subject to young and old alike. He has also presented Newsnight, and the BBC's flagship science show Tomorrow's World. Peter has something of a high, chirpy voice, so it is doubtful that he sings very low.

No one seems to know who Mark Burano is, not even ex-Toff Stephen Cousins. Alternatively, there is a San Marco Piazza on the small Italian island of Burano. Perhaps people sing there...

and John Kettley is a weatherman

Moustachioed Kettley was voted 'Housewives' Favourite' meteorologist during 1987, two years after joining the BBC Weather team. His smooth charm and warm, deep voice quickly made him Britain's most recognisable weatherman. The Tribe of Toffs' song, of course, only made him more famous, and Kettley is reputed to be quite envied by many of his colleagues. Kettley resigned from BBC TV after a dispute with management in 2000, and now works for BBC Radio Five.

Michael Fish is unfortunately most famed for getting a weather forecast wrong. On 15 October, 1987, Fish assured a panicked caller that a hurricane was not going to hit the British Isles that night. Murphy's Law being what it is, the south-east was ravaged that night by the worst storms in 300 years. The bespectacled Fish, today a 30-year veteran of the BBC weather team, has had to live with this reputation ever since, undermining his status as a well-educated, experienced and very knowledgeable weather presenter.

Parkin went from a gentle upbringing on Radio Tees before becoming a children's TV presenter in the late 1980s. Although he had a difficult task in filling the massively successful Philip Schofield's shoes, Parkin's refusal to 'talk down' to his audience meant he was regarded as a solid choice by the BBC, if not by the children. His work on variety shows endeared him to adults as well, and he appeared on the BBC's coverage of both Children In Need and the Royal Variety Performance before joining ITV. Today he has a show on Radio Five.

Eric Lane is the same

No clue on this one, either. There is an American playwright called Eric Lane, a late British budgerigar breeder, a 1980s American Footballer2 and an evangelical Christian priest. There was also an uncredited Eric Lane in the film of Lolita. Any suggestions?

In 1988, Jonathan Ross was a second-rate television presenter and radio script-writer, most notable for his lack of dress sense and the fact that he couldn't pronounce his 'r's. Fifteen years on, he is one of the BBC's leading lights, with his own award-winning chat show and radio programme. As of 2004, he is the BBC's biggest draw in the entertainment field. The dress sense hasn't improved, though.

An iconic figure of British flat racing, Piggott rode over 4,000 winning horses and won the Derby, the premier flat racing event, nine times. His first Derby victory in 1953, at the age of 18, ensures that he still holds the record for youngest winner of this prestigious event. Sadly, Piggott's career was tarnished in 1987 with his imprisonment for tax fraud, but after a 5-year sentence he returned to his career as a jockey, and won the Two Thousand Guineas classic race in 1992. Although his conviction had stripped him of his earlier knighthood, Piggott still enjoyed a prestigious retirement in 1995.

Few figures in the public eye have attracted as much mockery as David Icke. He began his career fairly innocuously, as a goalkeeper with Coventry City and Hereford, before moving into sports journalism. He became a commentator for the BBC on some of their B-list events (snooker, bowls and so on) and looked destined for a modest career as a household name. Icke had bigger and better plans though, starting with his election as the UK's Green Party3 spokesman. A noble cause perhaps, but his later proclamation that he was the Son of God, and public outcryings on conspiracy theories led him to become the source of much ridicule. David still expounds his 'alternative' theories today, via his website. There is no mention of him having owned a bicycle.

Richard Keys has got no knees

After many years with the dismal morning show TV-AM, Richard Keys took up a job with the (then) new channel Sky Sports, part of the expanding satellite programming kingdom that was British Sky Broadcasting4. Over the decade-and-a-half since, he has reputedly presented more live football than any other man in the country. Renowned for a dry sense of humour and the freakishly hairy backs to his hands, Keys is today Sky Sports' leading football presenter. Seen in a sitting posture most of the time, he most definitely must have some knees.

Debbie Thrower's got a lawnmower

Debbie Thrower has done a multitude of work on both television and radio. She has presented local TV for Meridian and South Today; fronted TV programmes on health, religion and gardening (she probably has got a lawnmower, then!); had a daily music and chat programme on BBC Radio 2, and had a call-in show on Radio 4. What a multi-talented lady!

Johnny Marr certainly plays guitar, and for many years he did so with the most influential and acclaimed band of the 1980s, The Smiths. Since The Smiths' demise, Marr kept himself busy making studio appearances with high profile bands such as the Pet Shop Boys and New Order. His tense, ringing guitar sound was deemed to be particularly appropriate for electronic music and it was not until the mid-1990s that he could settle down to writing and cutting his own solo albums.

All you could ever wish to know about the political tiger that is Sir David Steel is contained in this fine entry. It is thought improbable that he ever lived in Keele, near Stoke-on-Trent.

Charles 'Chuck' Knox was one of American Football's most prominent coaches through the 1980s. From the Los Angeles Rams, through the Buffalo Bills, to the Seattle Seahawks, Knox's passion for tight defensive play took his teams into the playoffs time after time. Amazingly, Knox was never to win an NFL Championship, perhaps proving that there is a bit more to sport than defence. Both the Seahawks and the Bills play in blue, so it is more than likely that Chuck has socks to match.

Andy Crane has got no brain

After Simon Parkin's (qv) departure from BBC children's presenting, the job fell to loveable floppy-haired buffoon Andy Crane. Crane was mostly notable for foisting noisy puppet Ed The Duck onto an unwilling public and for his terminal chirpiness, although this is probably something of a pre-requisite for children's TV. Crane later went on to host several programmes on Sky Travel, and now has a radio programme on the northern radio station Century FM.

It might not come as a total surprise to readers to learn that Bernard Davey was a weather forecaster. After a long career with the Meteorological Office, he had a short six-year television career, mostly on the Breakfast Time programme, before retiring with ill health. In his early years, Davey worked with the RAF, but never the Navy.

and John Kettley is a Weatherman

...and so is Billy Giles

Bill Giles, as he is more normally known, was BBC TV's longest-serving weatherman, and reputedly something of a tyrant behind the scenes. As the BBC's senior member of the Meteorological Office, he was keen to the point of ferociousness for junior weather forecasters to be professional and correct, but his appointment as leading weather forecaster in 1983 also coincided with a more watchable, graphical and personable weather forecast. Giles is probably responsible, directly or indirectly, for most that is good about the weather forecast today.

...and so is Ian McCaskill

Ex-RAF meteorologist Ian McCaskill was TV's cuddliest little Scotsman. His lilting Glasgow accent and enthusiasm as he bounced about in front of the blue screen made everyone feel in a sunny mood, no matter what the forecast. McCaskill's receding hairline, thick-rimmed glasses and bushy eyebrows made him ripe for parody, from Rory Bremner to Spitting Image, but he was affectionally regarded by everyone and his retirement in 1998 marked a great loss to BBC's weather team.

Another graduate of TV-AM, Wincey Willis was one of television's first glamourous 'weather girls'. An experienced public speaker from her university days, she had brains as well as looks, and built on her reputation on standing in front of maps as the co-host on cult quiz show Treasure Hunt5. Since the mid-1980s, Wincey has devoted more time to conservational causes and work with wildlife; she writes for several high-profile magazines on these subjects.