Margaret Leibovici nee Kelly aka Miss Bluebell - Indomitable Dancer and Impresario Content from the guide to life, the universe and everything 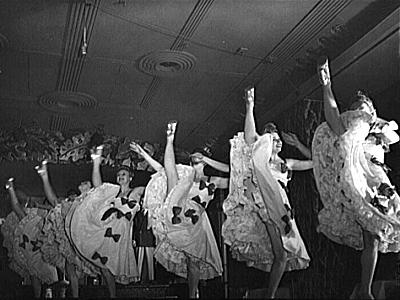 Miss Bluebell was born in 1910 in Ireland. Raised in Liverpool, she took up dancing to strengthen her constitution and went on to found the Bluebell Girls dance troupe in Paris. She risked her life during World War Two to save her husband, and was fiercely protective of her Girls. She was awarded honours in France and the UK, and her life story was dramatised by the BBC.

Margaret Kelly was born on 24 June, 1910, in Dublin. Classed as an orphan, it was likely that her parents were still alive but she was illegitimate, hence she was taken in by the Catholic Church of Ireland. Mary Murphy, a spinster, adopted her. They moved to Liverpool during the First World War, where Mary earned money as a nurse. Margaret was in poor health, with pale skin and weak legs, so she was examined by a doctor. The doctor noticed her striking blue eyes and nicknamed her Bluebell. She was prescribed ballet lessons in an effort to strengthen her legs.

Margaret had to earn money to help pay for the lessons, so she took up a paper round, helped the milkman and even worked as a golf caddie. Bluebell found she had a talent for dancing even though she grew too tall for ballet, so, after she left school, at the age of 14 she joined a professional dance troupe and toured the UK.

In the 1920s, she joined a cabaret dance troupe and went to Berlin. When the troupe visited Paris, Bluebell felt at home there, so she joined the renowned Folies Bergère. She quickly worked her way up to principal dancer, and was then encouraged to form her own troupe.

The Bluebell Girls were founded in 1932. Bluebell selected only women who were over 5ft 9ins in height (so they were considered too tall for ballet, as she had been) with hourglass figures and oval faces. She was strict with the Girls, instilling discipline to ensure they stayed fit enough to perform. She also set out rules for what they could wear when they were not on stage or in rehearsals and who they could spend time with, to ensure that they were safe and free from scandal. Her methods were a success so her troupe quickly grew in size and toured Europe.

However, war was on the horizon. Bluebell had fallen in love with Marcel Leibovici, a composer who was also the pianist at the Folies Bergère, and they married in 1939. When Paris was occupied by the German military in 1940, Bluebell and Marcel were interned. Bluebell was soon released as she had been born in Ireland, a neutral country, but Marcel was of Romanian Jewish heritage so he was transported out of Paris towards a deadly fate.

Marcel managed to escape from the transit camp and returned to Paris, where he hid in the attic of an apartment block. Bluebell risked her life by breaking the curfew to bring him food. She also had to bribe the block's receptionist not to give Marcel's hiding place away. Her activities attracted the attention of the authorities, so she was interrogated by the Gestapo. Bluebell was able to convince them that she did not know where her husband was, so they let her go.

After the Liberation of Paris in 1944, both Marcel and Bluebell took French citizenship to help secure the position of themselves and their family - their sons Patrick and Francis had been born in 1939 and 1941 respectively, and their daughter Florence had been born in 1943. They went on to have another son, Jean-Paul, in 1947.

In peacetime, the Bluebell Girls became the resident dance troupe at the Lido club in Paris. Groups of Bluebell Girls also toured the world. In the 1950s a resident troupe of Bluebell Girls was established in Las Vegas, the home of spectacular shows. The events would include variety acts such as jugglers and acrobats. However, the main attraction was the troupe of Bluebell Girls, who would perform high-kicking dance routines in front of fantastic stage scenery (jungles, waterfalls, etc) while wearing high heels, sequins and gravity-defying headdresses.

Miss Bluebell and her Girls had to adapt to the changing landscape in the world of cabaret. In the 1970s Bluebell allowed her girls to dance topless (provided their figures were sufficiently good to uphold1 the high standards that she had set for their appearance) - but she did not permit them to leave the stage during a performance, or to mingle with customers, to avoid her shows becoming thought of as seedy, or like strip clubs.

Bluebell officially retired in 1986 at the age of 76, although she continued attending Bluebell Girls shows until her health deteriorated in the year 2000. She died in Paris aged 94 on 11 September, 20042.

Bluebell's rags-to-riches life story was told in an authorised biography in 1986. The same year, the BBC broadcast an eight-part television series that was a dramatisation of her life. Bluebell herself appeared on the chat show Parkinson and demonstrated to the host Michael Parkinson that she could still do high kicks at the age of 76. In 1988 she appeared on BBC Radio 4's Desert Island Discs. France awarded her the Légion de Merité and the Chevalier des Artes et Lettres, and in 1996 she received both the French Légion d'Honneur and the British OBE.

The greatest testament to her work is that the Bluebell Girls can still be seen performing at the Lido in Paris today.