'Cabaret' - the Musical Content from the guide to life, the universe and everything 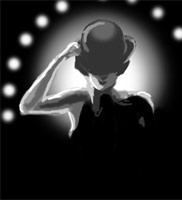 The musical Cabaret was the first big success for songwriting team John Kander and Fred Ebb1, a big hit on Broadway, running for over 1,000 performances in its initial engagement and with numerous successful revivals around the world in the decades since it was first performed. Dealing with the rise of the Nazi party in 1930s Berlin, the musical is hard-edged, taking no prisoners in a starkly real storyline based on Christopher Isherwood's Goodbye to Berlin and the subsequent play/film I am a Camera.2

Cabaret is often cited as one of the first major 'concept musicals', where the direction, design and symbolism of the piece can be just as important as the plot. The images evoked of decadent Berlin and the ways in which it bows to the rise of Nazism are powerful and disturbing, able to affect multiple generations of theatre-goers. The piece was conceived by producer-director Hal Prince, who worked closely with librettist Joe Masteroff, composer John Kander and lyricist Fred Ebb to shape both the general outline and the specific details of the show. The show opened on Broadway on 20 November, 1966, where the opening-night cast included Joel Grey, Jill Haworth and Lotte Lenya. The production ran for 1,165 performances and won 8 Tony Awards. A subsequent London production included Judi Dench, Peter Sallis and Barry Dennen in the cast. It opened on 28 February, 1968 and ran for 336 performances.

Berlin, 1930: The Kit Kat Klub is a thriving nightspot attracting visitors from across Europe who are welcomed by the effeminate Emcee, his Kit Kat Girls and 'the toast of Mayfair', singer Sally Bowles. Writer Clifford Bradshaw comes to Berlin from America to write his first novel and is given a room by one Fräulein Schneider (who has a long-running feud with Fräulein Kost, another resident who is running a house of ill-repute), on the recommendation of Ernst Ludwig, a pleasant German gentleman who Cliff met on the train. He soon finds his way to the club where he becomes romantically entangled with Sally, who moves in with him; a fact which is tactfully ignored by Fräulein Schneider as she is also having an affair with Jewish fruitseller Herr Schultz.

Life seems perfect for a while until both Ernst and Fräulein Kost are revealed to be members of the new Nazi party. On realising the power that the Nazis are gaining, Fräulein Schneider is forced to break off her engagement to Herr Schultz, despite Sally and Cliff urging her not to. Life also degenerates for the younger lovers. After Sally aborts their baby, Cliff leaves the country before the Nazis gain total control. As he leaves, he is haunted by the voices of the people he left behind and wonders what will become of them.

Throughout the action, the Emcee comments and reflects on the characters and events in a cynical style through numbers at the Kit Kat Klub. This Brechtian linking device remains one of the most famous features of the show and the Emcee's numbers form the core of those transposed into the film version. Wryly commenting on the action, the Emcee never allows the audience to forget the consequences of what each character does and decides. While the show starts out in an exuberant style, by the end of the first act the audience members are feeling distinctly uncomfortable; by the end, the fact that these sort of things actually happened in Berlin at the time truly hits home.

In order of appearance:

The ensemble play other employees and patrons of the Kit Kat Klub, as well as the sailors who use Fräulein Kost's services.

At the time of Cabaret's Broadway opening, John Kander was accused of swiping his musical ideas from Kurt Weill, who composed in Berlin at the time of the events depicted in the show. However, Lotte Lenya, who was playing the role of Fräulein Schneider, and happened to have been Weill's wife, reassured him that the songs were not Weill, they simply were Berlin. The main musical numbers from the original stage show are as follows:

The 1972 film of Cabaret was substantially different to the original stage production. Directed and choreographed by Bob Fosse, it dropped the Schultz-Schneider subplot, bringing in a different Jewish story from Isherwood's books in its place. The nationalities of Cliff and Sally were also reversed, due to the casting of Liza Minnelli as Sally, and sexuality was explored in more depth, with both Cliff (now named Brian) and Sally having an affair with the same 'sugar daddy'. Joel Grey played the role of the Emcee, as he had in the original Broadway production, and Michael Yorke played Brian.

Much of the score was also dropped, retaining only some of the numbers sung in the cabaret itself ('Willkommen', 'Two Ladies', 'If You Could See Her' and 'Cabaret') plus the Nazi anthem 'Tomorrow Belongs To Me'. Three new numbers by Kander and Ebb were added to bolster the score, all of which were sung in the setting of the Klub. 'Mein Herr' replaced 'Don't Tell Mama' as Sally's stage number, and is famous for the routine danced on and around chairs by the cabaret girls. The song tells of a woman who does whatever she feels like, however she feels like doing it and who doesn't give a damn how how other people feel about it. 'Maybe This Time' is a tearjerker which was originally written in 1964, but was brought in for the film anyway. The singer (Sally), sings of her hope that, against all odds, this time her love affair is going to last. 'Money, Money' replaced 'Sitting Pretty' and is conceived as a duet for Sally and the Emcee. Like the other song it is about money and the need for it. It expresses greed and an orgasmic love of money.

The film won eight Academy Awards but failed to bag the 'Best Picture' award, which went to The Godfather.

Cabaret continues to be revived worldwide by professional and amateur companies and had a run on Broadway in the late 1990s which exceeded the length of the original engagement, running for 2,378 performances in a theatre converted to a more cabaret-style environment. While some productions remain entirely faithful to the original script and score, most tend to make additions, deletions or changes, meaning that this is a constantly evolving musical. For example, Cliff's bisexuality, never really suggested in the original script, is sometimes retained from the movie version and both 'Money, Money' and 'Maybe This Time' are frequently inserted into the score of revival versions. Also, various numbers such as 'Sitting Pretty', 'Meeskite', 'The Telephone Song' and 'Why Should I Wake Up?' are dropped from the score, depending on the director's interpretation of the show and occasionally a number cut from the original, such as 'I Don't Care Much' (a song originally intended to be sung by a nameless prostitute, now appropriated by the Emcee) is interpolated. A new song, 'Don't Go', was written for a Broadway revival in 1987, but has not been used in subsequent productions and the song 'And the World Goes Round' from the film New York, New York (also by Kander and Ebb) has been used in some European productions.

Cabaret has been recorded many times, and most of the recordings have been made available on compact disc. There are six particularly notable English language versions - the original Broadway cast, the original London cast, the film soundtrack, the 1986 London revival, the 1998 Broadway revival and a complete studio recording with Jonathan Pryce, Maria Friedman and Judi Dench. Many international versions have also been recorded, including three notable Viennese cast recordings. The film version has been released multiple times on VHS and DVD, and a stage version from the Donmar in London (starring Jane Horrocks as Sally Bowles and Alan Cumming as the Emcee) was filmed for television in 1993.

1Their first show Flora, the Red Menace was a big flop2This was not the first attempt to 'musical-ise' Isherwood's work. Sandy Wilson, best known as the composer of 1920s pastiche The Boyfriend wrote an as-yet-unproduced version in 1963.