Ballet - Basic Positions and Directions Content from the guide to life, the universe and everything 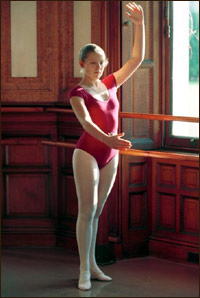 All ballet choreography is based upon a set of basic positions and directions, these are the starting point of the more advanced positions and movements that when combined produce the beautiful ballets that we all know and love. This entry is here to explain and describe them.

In the same way that painting has many schools (for example cubism, impressionist, realist) ballet has many 'methods', including, RAD1, ISTD2, Cecchetti3 etc. Each of these methods has a different style and way of describing positions and movements. This entry describes the Russian method.

One of the mainstays of the ballet dancer is the ability to have good 'turn out'. A dancer's legs should always be turned out, enhancing the shape of the leg as viewed by the audience. This highly unnatural position involves the legs being turned out from the hip, so that the inner thigh is facing forwards and the back of the thigh is turned inwards. The foot should then be pointing outwards of its own accord. Some people find it easy to force them further outwards by turning the ankle, but this is highly frowned upon as it can cause problems and injuries.

These positions, if not specified, are generally with the feet flat on the floor. They can however also be on demi-pointe or half toe which would be just standing on the balls of the feet with the heel raised as high as possible, or en pointe which is right on the end of the toes. This should only be attempted when wearing the special reinforced pointe shoes, a pain generally reserved for female dancers.

Directions of the Body

Croisé (Crossed Alignment) - When in either fifth or fourth position (positions where the legs are crossed) and the dancer is facing towards the front corner of the stage; croisé is where the audience would see the legs crossing. Another way to describe it is to say that if in this position the hip of the front leg is towards the audience then the dancer is in croisé.

En Face - This is standing facing the audience, with the feet in any position. This has some similarities to À la seconde.

Effacé (Open Alignment) - This the opposite of croisé. Again when the feet are in fifth or forth position and the dancer is facing towards the front corner of the stage, effacé is where the audience would see open legs, i.e. not crossed. Another description is to say the hip of the front leg is facing away from the audience.

Écarté (Separated or thrown wide apart) - The best way to describe this is probably to imagine À la seconde but facing one of the corners. The arms are held en attitude.

Devant - This term may refer to a step, movement or the placement of a limb in front of the body. In reference to a particular step, the addition of the word devant implies that the working foot is closed in the front.

Derrière - This term may refer to a movement, step or placement of a limb to the rear. In reference to a particular step, the addition of derrière implies that the working foot is closed to the rear.

En Avant - Used to indicate that a given step is executed moving forward.

En Arrière - Used to indicate that a step is executed moving backwards.

En Dedans (Inwards) - Some people try to describe this in terms of clockwise or anticlockwise, but that doesn't really work as it changes depending on which is the supporting leg. This is more of a feeling rather then a specific movement, i.e. the feeling of turning in on yourself. The best way to describe this would be to say the working leg (the one that is making the movement) comes from the back to the front, coming around inwards towards the supporting leg.

En Dehors (Outwards) - Unsurprisingly this is just the opposite direction to En Dedans, so it means the working leg travels from the front to the back, moving outwards from the supporting leg around to the back.

In either case if there is no supporting leg, in terms of something like a jump from both feet, it is done in relation to the front foot.

1Royal Academy of Dancing2Imperial Society of Teachers of Dancing3Enrico Cecchetti was a renowned teacher of dancing and the Cecchetti Method is based upon his teachings.