'Hopes and Fears' - a Novel by Charlotte Yonge Content from the guide to life, the universe and everything 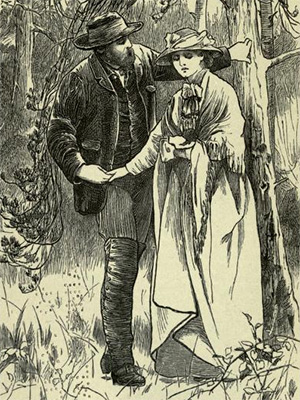 Hopes and Fears or Scenes from the Life of a Spinster is a family saga novel by Charlotte Yonge (1823-1901) that was published in 1860. It tells the story of Honora Charlecote, the spinster of the title, and the people she encounters during her life.

There are numerous characters in the novel, from several different but intertwined families.

Honora Charlecote, also referred to as Honor, Nora and Sweet Honey, is a woman of independent means. Torn between Owen, who doesn't love her as much as she loves him, and Humfrey, who loves her more than she loves him, she never marries. Instead she devotes herself to caring for other people's children and has a tendency to idolise them.

Humfrey Charlecote is Honora's second cousin. He is also godfather to Charlecote Raymond and supports other families in the neighbourhood, including the Fulmorts. A down-to-earth man, he enjoys managing the land in his estate. Apart from Honora, his closest living relative is Humfrey Charlecote Randolf, who was born in Canada.

Owen Sandbrook the elder is much more of a flighty character than the elder Humfrey. His son Owen is of similar character. In turn, Owen the younger fathers a son, also called Owen (known as Hoeing in a London accent, and nicknamed Flibbertigibbet or Giblets).

Lucilla Sandbrook, also known as Cilla, Cilly, and Lucy, is Owen the elder's daughter. She is named after her mother and is a very pretty and petite child. She is somewhat led astray by her rich cousin Horatia Charteris (who is also referred to as Rashe or Ratia) but her father's curate Mr Prendergast (or Pendy) looks out for her.

Robert Fulmort, also known as Robin, is the middle child of seven - his elder brother is Mervyn, his two older sisters are Juliana and Augusta and he has three younger sisters, Phoebe, Bertha and Maria. His father owns gin palaces, so the family is not well thought of, but he becomes a clergyman and devotes himself to charitable work.

Phoebe Fulmort is somewhat similar to Honora, being dutiful and eager to learn, but is more guarded in her affections. She has great respect for her agnostic governess Miss Fennimore and even helps the teacher to find faith. She cares very much for her younger sisters and is rewarded for her appropriate devotion by finding a man who loves her as much as she loves him.

Lucilla:   With Honora I always have a sense of fluffiness. There is so much figurativeness and dreamy sentiment that one never gets to the firm, clear surface.
Phoebe:   I thought that her great charm.

The families are found in various locations throughout the story. The Holt in Hiltonbury is the Charlecote family seat, where Humfrey lives before Honora takes over. It is near the town of Elverslope. Woolstone-lane is Honora's home in London. Wrapworth is where Owen Sandbrook and his family lived. The Charteris family live at Castle Blanch. Beauchamp is the house where the Fulmorts live. St Wulstan's, Honora's father's church, is taken on by Robert Fulmort. Whittingtonia, consisting of Whittington-street and Turnagain Corner, is the area where Robert ministers. Moorcroft is where the Raymond family live (John Raymond tutored the Fulmorts) and Sutton is where John's niece Cecily lives.

We meet Honora at the start of the novel when she is a young woman with auburn hair. Humfrey proposes to her, but she is planning to wait for Owen, who had gone travelling as a missionary, and also does not want to abandon her parents as her mother is unwell. Unfortunately, Owen does not wait for her, and instead marries into the wealthy Charteris family.

Humfrey had waited for her, though, and proposes to her again, but is again turned down. Owen visits after his wife had died, but he is unwell and leaves his children in Honora's care. After Owen succumbs to consumption, Honora begins to feel more strongly about Humfrey, but he too has become ill. Happy at last to know that Honora loves him, he does not propose for a third time - he wants to preserve her status in society rather than making her a widow, even though he knows she is not likely to marry now that she is over 30. However, he does make her his heir.

After both men have died, Honora works hard to bring up Owen's children as best she can, and her hair colour starts to fade. Lucilla resists her efforts, but the younger Owen adores his 'Sweet Honey' and Honora adores him. Sometime later, Honora encounters a boy, Robert Fulmort, in Hiltonbury Church where he had been accidentally locked in overnight. Humfrey had supported the Fulmort family, so Honora is happy to spend time with Robert and his younger sister Phoebe.

Lucilla and Robert, and Owen and Phoebe, seem to get on, but they are all very different characters. When Lucilla rebelliously goes to Glendalough with her cousin Horatia, she learns that without a chaperone 'however sufficient she may be for her own protection, the very fact of having to defend herself is well-nigh degradation' but still on her return she is not deemed a suitable wife for Robert, who has become a clergyman. Owen, like his father before him, does not wait for Phoebe but marries someone else. He leaves his new family and then goes to Canada. Lucilla decides to change her ways and becomes a governess rather than be dependent on her relatives for money. Honora thus has to re-evaluate her opinions of her children.

Phoebe spends time with Honora when the Sandbrook children have gone, and Honora loves her too, as they are similar in temperament. Phoebe is dutiful towards her sick mother, and takes good care of her sister Maria, who has a learning disability, but has a habit of trying to interfere in Robert's love life. Her name is rumoured to be linked to Jack Hastings, an unsuitable friend of her eldest brother who had followed Lucilla to Ireland. However, it is 15-year-old Bertha that he proposes to. Bertha is smitten, so takes the train to London to find him, only to discover that he was just dallying with her in case she was rich.

To help Bertha to recuperate from the illness brought on by the shock, Honora agrees to travel to Switzerland with her, plus Phoebe and Maria. On their return home, Honora learns that Lucilla is ill and has become sorry for the way she had treated Honora in the past. Owen is also unwell, as he had been injured in Canada when a tree fell on him. His friend Humfrey Charlecote Randolf helped him to return home to Honora and Owen, too, apologises for his behaviour. Thus the families are reunited and many lessons have been learned, while Honora's hair is now grey.

Each chapter of the novel starts with a quotation from apt poems by various authors, and the book at times is a sermon about avoiding false idols and focusing on Christian faith. However, it is still an enjoyable tale about different types of family lives. In particular the dialogue in the book is lively, as Charlotte often paid attention to conversations with people, and later wrote down from memory what had been said, to enhance her novel writing.

As it was common in the 19th Century, the characters in the novel have considerable experience of illness of various kinds.

'Owen could not repress a cough, which told plainly what it was come to' - he had consumption, or tuberculosis. His treatment was to go to mainland Europe, where the climate was conducive to improvement. Similarly, his daughter Lucilla became ill with a chest complaint. Consumption was not formally diagnosed in her, but the proposed treatment was the same (plus cod liver oil).

Nervous complaints feature often, too. When the elder Owen married someone else, Honora suppressed her misery and became feverish and weak, but recovered without treatment. Jealousy made Owen the younger's wife Edna weak and hysterical. Phoebe's father had a stroke1 and her mother became an 'aged invalid' who went into a decline after his death.

Bertha is a particularly interesting character who illustrates some of Charlotte's opinions about class and gender. She has a stammer and a squint, and they are considered to be because of her receiving an education that was too much for her female constitution. After the trauma inflicted by Jack Hastings, Bertha starved herself for three days, and then couldn't eat because 'fasting and agitation had really produced a contraction of the muscles of the throat'. Her brother Robert hadn't been worried about her at first, because he thought famine didn't harm people, as they ended up 'tottering but cheerful'. However 'he had not calculated on the difference between the children of want and the delicately nurtured girl, full of overwrought feeling.' Bertha had to use a wheeled chair because she was so weak, plus she had nightmares, lost her faith, and became hysterical if unfamiliar people visited her. The treatment was again a trip to mainland Europe.

Conditions that were not able to be cured by a trip overseas were Humfrey's aneurysm, for which there was no treatment, and Mervyn's complaint that was something like high blood pressure, requiring cupping, bloodletting and quietness whenever he had an attack.

'Water on the head' afflicted the Fulmort family - one of the children, also named Bertha, died from it, while Maria survived but was left with a learning disability. Maria's older relatives were not sure what to do with her, and contemplated putting her in an institution, but Phoebe recognised her talents so Maria found a vocation in parish work, spending time with infants, teaching them the alphabet and singing to them.

In the introduction to Georgina Battiscombe's biography of Charlotte Yonge2, EM Delafield claimed that, because Charlotte possessed 'cast iron sincerity that is utterly destructive of the more subtle forms of vanity', she never included autobiographical elements3 in her novels, with the exception of Abbey Church from 1844 and the 1861 work Countess Kate. Abbey Church, Charlotte's first published novel, centres around Elizabeth Woodbourne, who delights in making historical allusions in everyday conversation, just as Charlotte did at that age. Kate, like Charlotte, is a child who is keen to learn, but physically clumsy.

However, although Charlotte's powers of imagination cannot be doubted, in Hopes and Fears there are many parallels that can be drawn between the fictional life of Honora Charlecote and the life of Charlotte Yonge. These suggest the author included more autobiographical elements in her work than EM Delafield dared to give her credit for. Honora's faith and sense of duty is very important to her, as it was to Charlotte. Like Charlotte, Honora was 'brought into subordination' and her education was broad, so she too indulges in historical allusions. Honora kept a museum of nature, does parish work, and is close to her family, especially her cousins. And indeed Battiscombe herself notes that Honora's reactions to losing the people that meant the most to her owed much to Charlotte's sense of the loss of her father.

1As did Charlotte's father.2Charlotte Mary Yonge, Georgina Battiscombe, Constable and Company Ltd, 1943.3It can be argued about whether autobiographical elements in a novel are vanity, or simply a good way of introducing depth of character to the people in the novel.