Roger Lancelyn Green - Author Content from the guide to life, the universe and everything 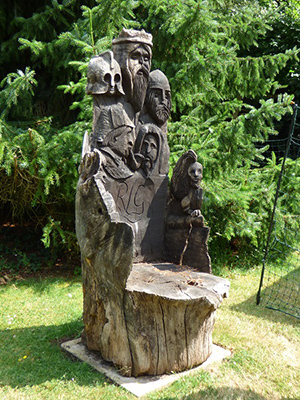 Roger Lancelyn Green (1918-1987) was a scholar and author from a family with a long lineage in the UK. A contemporary and friend of fellow authors, including CS Lewis and JRR Tolkien, he is best known for retelling myths and legends for children.

Roger Lancelyn Green was born on 2 November, 1918. He studied literature at Oxford University and also enjoyed taking part in amateur dramatics there. He attended lectures by renowned author CS Lewis and went on to join the 'Inklings' literary discussion group with Lewis and JRR Tolkien, amongst other similarly-minded men. He published his first book in 1946 - a biography of writer Andrew Lang (1844-1912) who was known for works about fairy tales, myths and legends. Roger served as deputy librarian at Merton College, Oxford until 1950, when he moved to the family seat of Poulton Hall on the Wirral. He had married June (who was seven years his junior) in 1948 and they had three children: Scirard, Priscilla and Richard.

Although Roger Lancelyn Green is best known for his child-friendly retellings of myths and legends, he also wrote a number of biographies of notable authors. In addition he contributed regularly to journals and magazines including the Review of English Studies and the Cambridge Quarterly. For the scholarly journal Notes and Queries he contributed a piece on the history of his surname and even replied to a note discussing words that may or may not have appeared first in one of Charlotte Yonge's many novels (Roger found an earlier usage of the word 'bloomer' to describe a woman who adopts a more masculine mode of attire than was deemed proper).

Following his biography of Andrew Lang in 1946, Roger's next book was a collection of his own poems including 'The Singing Rose' (1947), and that was followed by the fantasy novel From the World's End (1948). Other original fiction works include The Land of the Lord High Tiger (1958), Mystery at Mycenae (1959) and The Luck of Troy (1961).

Roger's retelling of the Legend of King Arthur was published in 1953. He went on to write similar retellings of legends including Robin Hood, Norse Mythology and Greek Myths. He produced a translation of the two best surviving Satyr Plays (Ancient Greek plays about tragic subjects with comic relief provided by a chorus of Satyrs, the male companions of the god Dionysus) in 1957. He also published Tales from Shakespeare in 1964.

1960 saw the publication of Roger's biography of Peter Pan author JM Barrie. In 1961 Mrs Molesworth, the biography of Mary Louisa Molesworth (1839-1921), another author of tales for children, was published. Roger wrote about Rudyard Kipling's life and work in the 1960s, and in 1974, with Walter Hooper, he wrote a biography of his friend CS Lewis, who had died in 19631.

In the 1970s Roger was the editor of anthologies including A Cavalcade of Dragons (1970), The Beaver Book of Other Worlds (1976) and A Book of Magicians (1977). In 1979 he published Into Other Worlds: Space Flight in Fiction from Lucian to Lewis. This book is a study of stories incorporating travel to places such as the Moon or Mars, ranging from Lucian's A True Story from the 2nd Century AD to CS Lewis' Ransom Trilogy (1938-43). Like Roger's other works, the book is informative while also being pleasing to read.

Roger took an interest in his family tree and even named his sons after two of his ancestors. The earliest-known member of the Lancelyn Green family was Scirard de Launcelyn, who was born in the 11th Century. Scirard built a castle in 1093 in the 'poulton' (a dwelling by water) on the bank of the River Dibbin2 on the Wirral. In the early 12th Century Scirard's direct descendant Richard de Lancelyn was titled Lord of Poulton Lancelyn and Bebington. In the 16th Century, there were no male heirs, so when Elizabeth Lancelyn married Randle Greene the family name became Lancelyn Green. By that time, the castle had been replaced by a manor house, which in turn was replaced in the 17th Century.

Poulton Hall as it is today was formed by extending the 1652 building. A library was added in 1710. Later in the 18th Century more rooms and servants' quarters were built. More recently, a billiards room was constructed, and most recently an extension was added to enable part of the house to be converted into a number of flats. The house is a Grade II listed building3.

Roger's wife June went on to gain fame locally in her own right. She was a Speech and Drama teacher until Roger became ill. She cared for him and also took an interest in gardening - in the 19th Century, a Walled Garden had been created at Poulton Hall to grow fruit and vegetables as well as providing a pleasing view from the house, but by the 1970s it had become neglected, so June decided to improve it.

After Roger died, June designed the garden as a tribute to him and his work. The garden covers three acres and is now a celebration of children's literature including The Chronicles of Narnia and Alice in Wonderland as well as Roger's own work such as The Adventures of Robin Hood and Tales of the Greek Heroes.

June became patron of a number of charities, including the Baden Powell Guild. She gave talks about the garden to local societies and opens the garden for charity on a few days each year. To promote her work, she wrote the Dowager's Diary column for the Wirral Champion magazine (1995-2012). She was awarded an MBE for services to the community in 2008.

The Curious Case of the Sherlock Holmes Expert

Roger's eldest son Scirard studied at Merton College, Oxford, then became a businessperson with a strong interest in theatre. Roger's daughter Priscilla became an artist and writer known as Cilla West and her mother commissioned her to design a sculpture ('The Singing Rose') for the garden at Poulton Hall.

It was Roger and June's youngest son who became most well-known through tragic circumstances. Richard had been a fan of all things Sherlock Holmes from an early age, and had even recreated Holmes' study in the attic at Poulton Hall. He studied English at Oxford University and amassed a collection of Holmesian memorabilia and merchandise as well as original writings by Sir Arthur Conan Doyle. He was the youngest person ever to be admitted to membership of the Sherlock Holmes Society of London and went on to serve as its Chairman during 1996-99. He published numerous works including a 712-page bibliography of Sir Arthur Conan Doyle's works that described pamphlets, letters and other ephemera as well as the novels that Conan Doyle was famous for. Richard was also the custodian of letters sent to 221b Baker Street (actually the London address of the Abbey National Bank) and published some of the items in a book entitled Letters to Sherlock Holmes.

Richard's main aim in life, though, was to write the definitive biography of Sir Arthur Conan Doyle. He had some access to unpublished papers through meeting with Dame Jean, Conan Doyle's daughter, but she stopped speaking to him a few years before she died in 1997. She bequeathed some of her archive to the British Library, but also bequeathed some to her family heirs. In 2004 the privately-owned papers were put up for auction, and Richard tried to use Holmes-like techniques to prove that they should have been part of the British Library collection, to no avail. On 27 March, 2004, he was found dead in his London apartment.

There was speculation about whether it was murder, as Richard had been concerned about rival Sherlock Holmes experts conspiring against him in the weeks leading up to his death. There was also speculation about whether it was suicide elaborately staged to frame his rivals for murder. Either way, the event would not have been out of place in a Sherlock Holmes novel. The coroner returned an open verdict. Richard bequeathed his immense collection to the City of Portsmouth, as that was the place where Conan Doyle first created his most famous character.

1On 22 November, the same day as both Aldous Huxley and John F Kennedy.2Which has also become known as the Dibbinsdale Brook.3This means it is 'listed under the Planning (Listed Buildings and Conservation Areas) Act 1990 for its special architectural or historic interest' in the UK.