The Mars/Barsoom Books of Edgar Rice Burroughs Content from the guide to life, the universe and everything 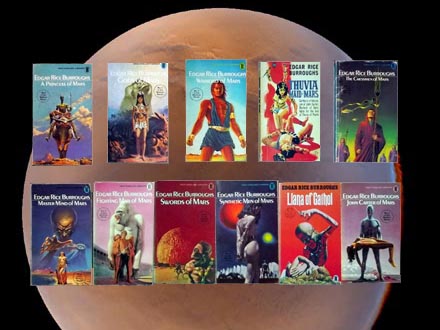 Edgar Rice Burroughs (1875-1950) was an American writer of adventure stories in the early 20th Century. He is most famous for his invention of the character Tarzan, the child who was abandoned in the jungle and was brought up by apes, going on to be the muscle-bound ruler of the jungle.

Burroughs wrote many other series of books, and while none of them is as famous as Tarzan, they were well received in their time. Probably the best and most popular of these are the Mars/Barsoom books. They feature planet Mars occupied by warring nations who have a mixture of high and low technology - they fly around in giant warships kept in the air by antigravity, and have guns so accurate they can hit a target 100 miles1 away, but tend to prefer hand-to-hand combat with swords. A veteran soldier of the American Civil War, John Carter, is mysteriously transported to Mars. He fights his way up to being Warlord of Mars and wins a princess along the way.

The inhabitants' name for Mars is 'Barsoom', so these are often called the Barsoom books to distinguish them from other stories about Mars. They are also sometimes called the 'John Carter books', but in fact John Carter is only the main character in six of the 11 books.

The stories are adventures in which the hero will always get the girl and there's lots of hand-to-hand combat. An unusual feature of Martian life is that the inhabitants never developed the habit of wearing clothes. Everybody is naked except for a leather harness for holding swords, keys and other possessions. Despite this, there's no sex in these books. John Carter kissing the princess is about as racy as it gets.

The books are now out of copyright in some parts of the world (although still in copyright in Europe until 1 January, 2021) so they can easily and cheaply be downloaded from Gutenberg or your favourite e-book store.

Science Fiction or Fiction with Science?

While these are swash-buckling adventures rather than science fiction, Burroughs tried to keep them scientific - he tried to explain Martian inventions in terms of known science. So everlasting lights in tunnels are powered by 'radium'. The floating warships and fliers are held aloft by buoyancy tanks full of 'Martian rays'. The planet's lower gravity gives John Carter a huge advantage. His Earth-born muscles allow him to jump to great heights and he is immensely strong compared with the natives. Mars' moons are frequently referred to, as they are distinctly different from Earth's moon - the larger moon, which we call Phobos, travels across the sky very quickly and this is a recurrent motif in any description of a Martian night scene.

On the other hand, Burroughs was not a scientific expert. He does not seem to have known that the lesser Martian moon, Deimos, is so small that it would appear more like a bright star than a moon from the surface of the planet. His Martians are hatched out of eggs, but the eggs grow in size and weight after being laid, and no explanation is provided for this remarkable fact. The Martian rays are colours of the spectrum of ordinary sunlight which are not seen on Earth because they are filtered out by our atmosphere. One of these rays repels Mars, so it is used as the antigravity agent that keeps the airships afloat. Another ray, when electrified, makes air. And no attempt is made to explain the miraculous process by which Carter suddenly finds himself on Mars.

The Mars of the stories is the one imagined by people at the beginning of the 20th Century - it is a dying world. Long in the past there were oceans, forests and a dense atmosphere. Now the oceans have dried up and the only source of water is the polar ice caps. Melt-water from these is carried in canals around the planet, and the land on either side of them is cultivated. It is these swathes of cultivated land that are seen by Earthly astronomers as lines on the surface and are identified as canals2.

Most of the planet outside of these arable areas is bare and is covered with a type of ochre moss which appears to be indestructible and will grow with a minimum of moisture from the atmosphere. It is this that gives the planet its distinctive red colour. It also dampens the sound of all footsteps, allowing ample opportunity for entire armies to creep up on cities unnoticed.

In times gone by, the Martians had built many cities along the coasts, and these now all lie abandoned due to lack of water. Humankind has moved to new cities which are positioned in the arable land around the canals.

The people of Mars are divided into two species, the Green Men and the others, who are variously Red, White, Black or Yellow. The Green Men are huge and alien while the others are to all intents and purposes just like the humans of Earth. In fact John Carter is able to have children with one of them, so they are obviously extremely similar to us.

Many Martians have two names, such as Tars Tarkas, Dejah Thoris or Tardos Mors. The second name is not a surname, however. Martians with two names are always addressed by both names. Dejah Thoris is always called that, and never just Dejah or Thoris. As a result John Carter is always called by his full name, even by his own wife.

As well as the intelligent species, Mars has many different types of animal, almost all with a profusion of limbs. Here's a selection:

Each book is shown with two dates, the year the stories were first published in magazine form and the year the book was published.

Image of Mars provided by NASA

1160km.2Many real-life astronomers thought they saw these canals on Mars, but they turned out not to exist.34.6m.43-4.5m.51.8-2.4m.6Jetan, or Martian chess, is played on a 10×10 board with 20 pieces on each side. An appendix to the book gives detailed, although somewhat ambiguous, descriptions of the pieces and their moves.7Known on Earth as Phobos.