Poulton Hall, Wirral, UK Content from the guide to life, the universe and everything 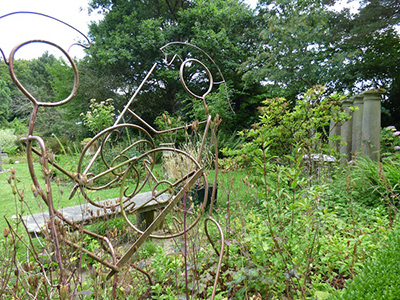 Poulton Hall on the Wirral is the ancestral home of the Lancelyn Green family, and the Manor House of Poulton Lancelyn, which is now an area within the town of Bebington. It is open for events during the year and is well worth a visit if you get the opportunity.

There has been a 'poulton' (a dwelling by water) on the bank of the River Dibbin on the Wirral since at least 1093, when Scirard de Launcelyn built a castle there. By the 16th Century, the castle had been replaced by a manor house, which in turn was replaced in the 17th Century. Poulton Hall as it is today was formed by extending the 1652 building. A library was added in 1710. Later in the 18th Century more rooms and servants' quarters were built. More recently, a billiards room was constructed, and most recently an extension was added to enable part of the house to be converted into a number of flats.

Poulton Hall is a Grade II listed building1. It is occasionally open for tours and events. It has featured in location filming, notably for the 1969 TV series The Owl Service and the Chester-based soap opera Hollyoaks. The estate's brewhouse dates from the 17th Century and is also a Grade II listed building containing a fireplace and brew vat. It also hosts a belfry containing a carillion - 32 bells that can be played using a keyboard. Computer controls were added to enable a tune to be played on the hour every hour. Most (23) of the bells were cast in the 21st Century, but the others are older. The oldest dates back to 1656.

Poulton Hall is now best known for being the home of author Roger Lancelyn Green (1918-1987) who, in turn, is best known for his child-friendly retellings of myths and legends. He was a friend of fellow authors JRR Tolkien and CS Lewis, and wrote a biography of Lewis Carroll. 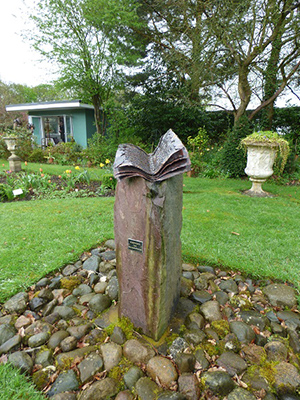 In the 19th Century, a Walled Garden was created to grow fruit and vegetables as well as providing a pleasing view from the house. The garden covers three acres. It was redesigned in the 1980s by June Lancelyn Green, Roger's wife, and is now a celebration of children's literature including The Chronicles of Narnia and Alice in Wonderland as well as Roger's own work such as The Adventures of Robin Hood and Tales of the Greek Heroes. The garden is open for charity on a few days each year - details are on the Poulton Hall website.

Visitors enter2 the walled garden through a wardrobe that opens out into the Alice in Wonderland Walk. This area is laid out as a formal garden. Apple trees and box hedges fill the parterre to your left. The Classical Garden to the right features stone columns, and sculptures by local artists - one sculpture is entitled 'Roger's Book', and the other features a Greek hero fighting a Trojan hero.

You see a sundial straight ahead, then the Lavender Garden is to your left while the Rose Garden is to the right with 'The Singing Rose' sculpture, by Roger's daughter Cilla West, at its centre. Continuing straight ahead past the Obelisk, you enter the Fountain Garden where you may3 pass a wooden sculpture of Robin Hood and also the wooden Storyteller's Chair featuring the faces of several characters from Roger's books. Also here are metal sculptures including a magnifying glass dedicated to Roger's son Richard Lancelyn Green, a noted expert on Sherlock Holmes' creator Arthur Conan Doyle, who died in 2004.

The Japanese Garden is next, and that leads to the Tea House, Herb Garden and Witch's Garden complete with pottery cats. A gate leads through to the Golden Garden, with the Golden Bowl centrepiece. Here, there is a vegetable garden featuring Peter Rabbit and Mr McGregor, and the Nursery Rhyme Garden. A sensory garden, with scents and sounds as well as colour, celebrates Roger's story The Land of the Lord High Tiger.

Other curios to look out for include: Harry Potter's owl Hedwig, the Jabberwock, a Viking and the Sword in the Stone. June Lancelyn Green herself may also be in the garden4.

The Reading Room contains soft seats, a display of Roger's books, photographs of the house and garden, and several well-loved soft toys. The Gazebo has hard seats, a mosaic floor and books, and leads through to visitor toilets5. On garden open days, volunteers guide people to the car park areas. There is a charge to enter the garden, but all proceeds go to various charities. You can purchase tea and cake to enjoy in the Conservatory, or sit out in the Golden Garden when the weather is good.

You should set aside at least an hour to explore this hidden gem, as it makes for a rewarding visit for adults as well as children - every corner offers something amusing to discover, and each garden within the garden provides fascinating views from different angles.

1This means it is 'listed under the Planning (Listed Buildings and Conservation Areas) Act 1990 for its special architectural or historic interest' in the UK. 2Wheelchair users enter the garden either via the front of the house, or through the Gothic Gate that is situated at the top of a fairly steep ramp.3In wet weather, a number of the sculptures and other decorative items are taken indoors for safe keeping.4She was there when this Researcher visited in April 2018.5There is no wheelchair accessible toilet, though.