'Igor' - the Animated Film Content from the guide to life, the universe and everything 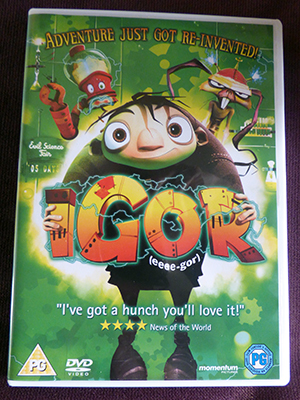 The 2008 film Igor is a computer animated film that was made by Sparx Animation. It cost about $25 million to make and grossed about $31 million in cinemas around the world. Although pre-publicity boasted that 'Turning out a flop animation these days takes real effort', that's exactly what the team managed after 'Print & Advertising' costs were taken into account. DVD sales and rental helped to recoup some of the loss but, in the UK at least, Igor is now most likely to be found in the bargain section of a garden centre.

Igor was written by Chris McKenna, who had been a writer for the animated TV series American Dad! (2005+) and went on to write the screenplays for The LEGO Batman Movie (2017) as well as a number of live action films. Igor was directed by Tony Leondis, who had worked on Disney's Lilo and Stitch 2: Stitch Has a Glitch (2005) and went on to direct other animated films including The Emoji Movie (2017).

In the film, Igor is contemplating the meaning of life and his place in the Kingdom of Malaria as one of the Igors, hunchback people whose only role in life is to be assistants to the 'Mad Scientists'. When his scientist's invention malfunctions, causing a lethal accident, Igor is free to work on his own inventions. Eager to win the Evil Science Fair Competition, to show that Igors can do science too, he decides to create his own monster.

Igor is voiced by John Cusack of Grosse Pointe Blank (1997) fame. Igor is an unconventional hero, being intelligent rather than handsome, but he still has a lot to learn when he realises his monster has a mind of her own.

Eva the monster is stitched together from parts of different bodies, so she has a big arm and leg, a thin arm and leg, different coloured eyes and dark hair. An 'evil bone' was incorporated into her finger, but Eva would rather be an actress than an evil monster. She is played by Molly Shannon, who is known for Saturday Night Live and went on to play Kath in the TV series Kath & Kim (2008-9) amongst many other roles.

Scamper is a rabbit that Igor has made immortal. He, too, is searching for the meaning of life. Scamper is voiced by Steve Buscemi of Reservoir Dogs (1992) and Monsters, Inc. (2001) fame. Another of Igor's creations, Brain is a brain in a jar. Not the brightest brain in existence, his jar has an extendable arm, and wheels so he can move around. Sean Hayes, best known for playing Jack in Will & Grace, provides his voice.

Comedian Eddie Izzard plays Dr Schadenfreude, a flamboyant Liberace-esque European scientist who expects to win the Evil Science Fair Competition again, and ultimately wants to become King of Malaria. His Igor is played by Christian Slater, who had had roles in various films before 2008, including Malloy in Interview with the Vampire: The Vampire Chronicles (1994) and Will Scarlett in Robin Hood: Prince of Thieves (1991).

Jaclyn, also known as Heidi, is Schadenfreude's evil girlfriend. She has the ability to turn herself into other scientists' girlfriends so as to steal ideas for inventions and give them to Dr Schadenfreude. Actor and comedian Jennifer Coolidge creates various amusing voices for characters, so is well cast in this role.

King Malbert is played by chat show host Jay Leno. Talkshow host Carl Cristall the invisible man is played by talkshow host Arsenio Hall. Hall had provided the voice of Winston in the animated TV series The Real Ghostbusters (1986-7). John Cleese has a cameo role as Igor's Fawlty-esque mad scientist Dr Glickenstein. There are also cameo roles for the director, writer and producers, plus their children.

Igor is classified PG (Parental Guidance) for 'scary scenes and mild insults'. Some scenes are intense, such as a carriage chase along mountain roads, as well as the final battle. There is also quite a bit of violence, such as when Jaclyn and Dr Schadenfreude each slap an Igor as a proxy for their own fight. Other disturbing scenes involve Scamper, who tries various ways of committing suicide when he is unhappy with life, and later uses his immortality to his friends' advantage by gnawing off his own feet, for example. There is no blood, but the bones and muscles that are seen are somewhat gory at times.

The main inspiration for the plot is Mary Shelley's novel Frankenstein, in which a monster is created and brought to life. In particular, the 1930s film versions of the book introduced the hunchbacked assistant who became known as Igor. Viewers can also enjoy looking out for references to other Gothic Horror stories and B-Movies such as Jekyll and Hyde, The Fly and The Invisible Man.

The animation itself displays very good attention to detail. Lip sync is sometimes slightly off, as the film script underwent several changes as production progressed so the dialogue was only finalised after the animation had been completed. Apart from that, facial expressions are carefully crafted to convey the characters' thoughts and emotions, and the body language is strong (even Dr Glickenstein's severed mechanical arm is expressive). The background details were created to be particularly impressive in 3D, as the film was released in both 2D and 3D versions. For example, the machines in Igor's Steampunk-style dwelling have excellent rusty metal texture and superb depth, the carriage chase gives viewers a sense of scale of the immense mountains, and 3D is also used to good advantage when Igor abseils down a tower.

Budgetary pressures also influenced the film - it was much more quickly and cheaply made than similarly villainous films (for example Despicable Me (2010) had a budget of $69 million) and money was saved in a variety of ways. One way was by limiting the number of characters - for example the script called for a spider to appear, but a fly was used instead as that had already been animated. Similarly, the streets were empty of people rather than requiring crowds to be created. Some animation techniques were also done more efficiently, for example by adding limited amounts of light from a single source rather than introducing a number of different light sources. The animation was carried out at a studio in Vietnam and finished by former Disney animators in France, vocals were recorded in the US and UK, and the soundtrack was orchestrated in Bulgaria.

Humour of various kinds is a key feature, from visual comedy such as Igor and Dr Schadenfreude wearing identical swimming costumes in a hot tub, to verbal humour such as when Scamper looks at Eva and says, 'Can you imagine a face like that on a 40ft screen?', which is exactly what cinema audiences would have been seeing! Other amusing details include the Brain Wash, which is like a car wash but features TVs showing scenes from classic films, and the Invisible Man taking advantage of his situation to go around without any trousers on.

The music is well-chosen to enhance the film. A number of songs are sung by Louis Prima (who had voiced King Louie in Disney's 1967 film The Jungle Book) including 'Pennies from Heaven' and 'Baby Won't You Please Come Home?' Molly Shannon sings 'Tomorrow' when Eva thinks she has been given the title role in the musical Annie. The production crew's children sing 'I Can See Clearly Now' when the evil clouds have been dispersed, and Natasha Bedingfield's 'Pocketful of Sunshine' accompanies the end credits.

Igor was released on DVD and Blu-Ray in 2008. The special features are an advert for Butlins and an audio commentary by the director Tony Leondis, writer Chris McKenna and producer Max Howard1. The disc contains CD-ROM content as well, so children can print out an Igor face mask, pictures to colour in, puzzles and a recipe for goo.

1Max Howard had previously been co-producer of Disney films Who Framed Roger Rabbit (1988) and The Lion King (1994).