How to Make Green Goo/Gloop Content from the guide to life, the universe and everything 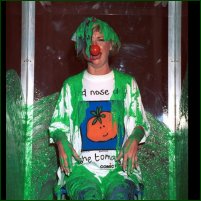 Goo, or gloop, is great stuff — green and runny and looks like something that either came out of your nose or dripped off an alien that Doctor Who just zapped with his sonic screwdriver! So how do you go about making your very own to muck about with? Simply follow the directions below for a completely safe and fun source of gooey entertainment.

Mix the ingredients together in a large bowl, using your hands (because it's more fun that way). Once all the elements have combined, do as you will! Roll it, punch it, dribble it, throw it about! It's advisable to wear an apron when making goo, but don't despair if it gets in your hair or on your clothes. Let it dry and the cornflour should just brush out. However, dependant on the variety of dye or colouring you use, there may be a danger of staining to clothes. There are other ways of making goo, but this particular recipe is the safest as it doesn't matter if the mix is swallowed. However, it is not recommended that the mixing of the ingredients be done around those that suffer from respiratory complaints such as asthma, as the dust from the cornflour can irritate.

Why does the goo behave like, well, goo? Cornflour is made up of lots of long, stringy particles that don't dissolve in water. However, they do spread themselves out, which allows the goo to act as both a solid and a liquid. When you roll the mixture in your hands or apply any force to it, the particles join together and the goo becomes solid. But if you let the goo settle or hold it up to allow gravity to come into play, it dribbles about as the particles slide over each other in liquid form.

Making goo is a brilliant way of entertaining children on a rainy day. It's messy, but it's nice and affordable — a fantastic activity for play schemes. And kids love anything that involves them getting mucky. To turn goo-making into a multi-sensory experience, you can add smidgens of scent such as lavender or other types of infused oils, or even a tiny amount of coffee or chocolate. In this way, the children exercise several senses when playing with the goo: touch, smell, taste and sight. This becomes especially significant when the goo is for a child with educational needs or sensory-impairment, or is just unwell and therefore a bit uninspired.

One fun activity is to make loads of goo and then pour it into a large flat tray and add items. The children can close their eyes and then search for things in the goo! Blocks of Lego or other plastic toys like insects and farmyard animals are favourites, so you can incorporate other types of play, for example singing songs such as 'Old Macdonald' or 'There Was An Old Woman Who Swallowed a Fly' and having the children find the animals in the goo. Green goo is also a great addition to any Halloween party, as it is just as much fun for adults as it is for younger people.

1Or cornstarch.2You can substitute the green for other colours if you wish.