'Will and Grace' - the Television Series 1998-2006 Content from the guide to life, the universe and everything 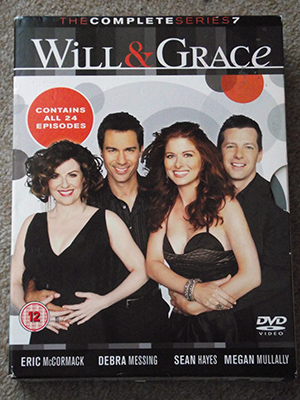 Will & Grace is a sitcom set in New York City. It is centred on Will, a gay lawyer, and his best female friend Grace, a straight interior designer. Their friends Jack, a gay actor, and Karen, Jack's best female friend and Grace's employee, share the spotlight and often steal the show.

The sitcom was created by David Kohan and Max Mutchnick, of KoMut Entertainment, and was inspired by Max's relationship with his best female friend. The show ran for eight seasons (192 episodes) between 1998 and 2006.

Will Truman is played by Eric McCormack. As a lawyer, Will is fairly well-off, so he lives in a spacious apartment in New York City. Grace, his best friend from college, is never far away. Even though Grace can be messy while Will prefers things just so, they get on so well together they can almost read each other's minds (a skill that comes in handy when they play party games with their friends - they enjoy winning at all costs, much to their friends' dismay). Somewhat unlucky in love, Will has a few relationships with men during the series, but none is as strong as his relationship with Grace.

Eric McCormack had a variety of roles before being cast as Will. Most notably, he had a key role in the TV Western  Lonesome Dove (1994-6) and played Edward Malone in the 1992 film version of Arthur Conan Doyle's novel The Lost World.

Grace Adler is played by Debra Messing. As a self-employed interior designer, Grace is a capable businesswoman, but in her personal life she relies on Will to help her decide what to do. She is also generally unlucky in love - she dated Will in college, until he came out as gay, but he is happy to be there for her when other men let her down.

Like Grace, Debra Messing is Jewish-American. Before Will & Grace, Debra had parts in various TV series, including lead roles in Ned and Stacey (1995-7) and Prey (1998).

Jack McFarland is played by Sean Hayes. Jack met Will at college and supported him with coming out as gay, so they are good friends although they don't always get on well with each other. Jack is an aspiring actor and is often down on his luck, so he takes a variety of jobs to make ends meet. He is often also supported financially by Will, and by his best female friend Karen.

Sean Hayes came to fame as the eponymous gay hero of the independent film Billy's Hollywood Screen Kiss (1998). Like Jack, he has gone on to become a TV producer. He has also lent his voice to characters in a number of animated films, including Igor (2008).

Karen Walker is played by Megan Mullally. Karen is a rich woman, thanks to her marriage to Stanley Walker and her own business acumen. However, she is overfond of alcohol and medication. Mostly shallow, and concerned more with appearances than inner substance, she can be a good friend to Jack, Grace and Will when they need her. She and Jack enjoy flirting with each other, she has had romantic experiences with some women, including Grace, and she married another man after Stan was believed to have died.

Megan Mullally had roles in TV series including Ned and Stacey as well as TV movies and animated films1. For the role of Karen, she puts on a particularly high and squeaky voice.

Karen's husband Stan is never seen or heard on screen - in the early series, he was talked about but never talked to, whereas in later series other characters meet him, but the audience can't see him because he is hidden from view, for example by the steam in a sauna.

Introduced in season two, Karen's maid Rosario is played by Shelley Morrison, who has had a large number of small roles in film and TV, including Prey. She has often played maids and/or Spanish speaking people. Grace's mother Bobbi Adler is played by the legendary Debbie Reynolds, mother of Carrie Fisher.

The popularity of the series meant that a large number of celebrities were keen to appear in cameo roles. For example, iconic singer Cher appeared as herself, although Jack mistook her for a drag queen Cher impersonator. Madonna played Karen's housemate in one episode. Jack stalked Kevin Bacon and briefly became Jennifer Lopez's backing dancer. John Cleese played Karen's fourth husband Lyle Finster.

Each episode has a title, which is often a pun on the title of a classic musical, film or TV show. Examples include 'My Fair Maid-y', 'From Queer to Eternity' and 'Whose Mom is it, Anyway?'. Other amusing titles include 'Tea and a Total Lack of Sympathy', 'Loose Lips Sink Relationships' and 'May Divorce be With You'.

The main situation for the comedy is Will's apartment, which includes the lounge/kitchen/diner, TV room, two bedrooms and a large bathroom. We also see the hallway (including the elevator, where many important encounters occur) and the apartment across the hall. The headquarters of Grace Adler Designs appears in many episodes, as does Will's office. Viewers often see Jack on stage during his early career, then later we see him in his office at the TV company. Karen's house sometimes features, including her impressively large bedroom as well as Rosario's small one.

Will & Grace's primetime success led to the show being praised for bringing gay relationships to the attention of wider audiences in a positive way that helped to reduce 'othering' of gay people, showing gay characters just being themselves (as far as is possible for any character in a sitcom context). The show paved the way for even stronger programmes, such as the US version of Queer as Folk, which include more depth in the portrayals of gay men and their lives.

The show introduced audiences to some ideas that may be new to them, such as gay relationships (Jack often mentions one night stands while Will searches for more commitment - relatively little actual touching of boyfriends occurs). Some 'insider jokes' feature, such as Jack criticising Will's dress sense, and Will mocking Jack's effemininity. Grace and Karen also make jokes at Will and Jack's expense (for example, in one scene Karen arrives at Will's flat and asks, 'Anyone homo?', and in other scenes Grace makes reference to 'your people' and thinks she 'turns men gay'). However, like Till Death Us Do Part/All in the Family, certain audiences could interpret the humour as reinforcing their prejudices rather than as satire of their prejudices.

Lorraine Finster2: You're a fancy dresser. Are you English?
Will: Oh no, I'm gay.
Lorraine: Well, it's the same thing.
Will: If that weren't true, I'd find that offensive.

Other humour relies on stereotypes about Jewish people - for example Will often makes comments highlighting how Grace is greedy, taking his food and borrowing his possessions. A particularly troubling scene involved someone criticising the size of Grace's nose while they were waiting in a queue for tickets to see Barry Manilow. Given that Manilow is not famous for having a small nose himself, it seemed strange for a 'Fanilow' to make such a comment.

Similarly, the show was criticised for the lack of representation of people of colour, given that it was set in the cosmopolitan city of New York. The issue was addressed somewhat with the introduction of Will's boyfriend Vince, plus the scenes when Rosario proved herself to be the equal of Karen - the two women had a close bond in spite of fighting most of the time.

Even the casting of the show caused comment - famously, the openly gay John Barrowman was turned down for the role of Will because he didn't look gay enough, while the straight actor Eric McCormack won the role. Sean Hayes did not discuss his sexuality while in the show, but came out in 2010 and married his partner Scott in 2014.

The Queen song 'You're My Best Friend' ended the series in 2006 (a popular song with a clear message, it was similarly used at the start of the film Peter's Friends). However, in 2016 it was announced that the original team would reunite for a new series. That is a topic for a separate Entry.

1In 2007 she worked on Bee Movie.2Daughter of Lyle Finster, from the UK.