American Television Reinventions: Drama Content from the guide to life, the universe and everything 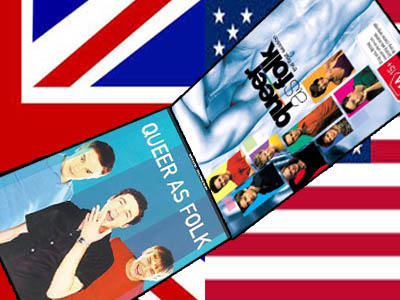 Interpersonal relationships are universal. All around the world people feel loved, attracted to, betrayed by and indifferent to all those around them, making interpersonal dramas timeless. Television programmes even add a genre-twist to the age-old tale of person meets people, changing the setting in order to up the drama and keep the format fresh.

British television drama series have long been remade for American audiences. Although many crossovers begin as fairly close copies of the original that inspired them, as the actors and producers became more comfortable in their roles, successful shows usually evolve away from the original.

In the original series by Russell T Davies, the man most famous for bringing back Doctor Who, we follow the daily happenings and relationships of the people around a gay club in Manchester. It gained a great deal of acclaim during its initial run on Channel 4. Ten episodes were made over two series.

Following the established formula, the early scripts were remarkably close to the British ones. The American version's setting changed to Pittsburgh and the characters' names, occupations and hobbies are also altered. For instance, the character Vince who was portrayed as a Doctor Who fan in the UK version, becomes a comic book collector in this one.

As with many other series that make the crossover, the people making the show began taking it in its own direction. This is very true here, as not only did it make far more episodes than the UK original – 83 across five series - it became almost unrecognisable in all but name.

Ultraviolet was a short-lived series that had a small run in the UK, and an even shorter-lived adaptation across the Atlantic.

An interesting cop/drama/fantasy series following Michael Colefield (Jack Davenport) who uncovers the strange, unknown world of vampires. Running in 1998, the six episodes made contained an interesting blend of ideas and it picked up a reasonable fan base.

This was adapted for the American market under the same basic idea, with UK cast member Idris Elba returning as the very same character he played in the UK original. This, sadly, is an example of a programme getting as far as a pilot that was never even broadcast - a common occurrence with American television in general. As with Red Dwarf, fans of the original series would like to see it released if only for its novelty value, but that unfortunately seems unlikely.

A comedy/drama made for Channel 4, this series follows a day in the life of each of a group of six teenagers living in London as they move on with their lives (such as one episode centring on one of the young men having a relationship with an older woman). Typically, the action follows a single teenager per episode, sometimes going over the same stories in different episodes from different perspectives within the group.

A direct crossover, the US series featured original cast member Emily Corrie playing the same role, 'Sooz', alongside new actors. Seven episodes were made. It ran for two weeks on UPN, immediately following Buffy the Vampire Slayer, but apparently failed to make much of an impression, as it was cancelled even before all the episodes had been shown.

The longest running science-fiction series in the world, Doctor Who began in 1963. Originally a family drama programme intended to fill a 25-minute gap in the Saturday schedule between Grandstand and Juke Box Jury, it was tasked with teaching and inspiring its young audience about science and history. Our heroes, originally including a history and science teacher, interact with the past and future aided by the TARDIS, their time machine disguised as a 1960s Police Telephone Box. With the introduction of the dreaded Daleks, the series moved away from this initial idea, instead becoming a series featuring monsters from outer space.

A programme with a large cult following in both the UK and the US, it was almost cancelled in 1985 and its initial run ended in 1989, although it would later return in 2005. Between its cancellation and restoration, there exists a strange American hybrid episode, known as Doctor Who: The Movie.

Since his childhood, British producer Philip Segal had always had a fondness for Doctor Who. In 1989 he was appointed producer for Steven Spielberg's Amblin Entertainment, and began to investigate the possibility of making an American-based Doctor Who series1. Finally securing the format rights, Segal began to plan his new series from 1992.

Initial drafts considered a complete reinvention (as with many of the above programmes). The Daleks' proposed redesign was for them to be spider-like. The Cybermen were renamed 'Cybs' and had a design based on the stereotypical 'Red Indian' from old Westerns, with the overall plot focusing on the Doctor's hunt to find his long-lost father, Odysseus. These ideas went through several drafts before finally a BBC-Fox Television TV Movie was made, which the BBC hoped would be considered as a pilot for a potential new series. Instead of recreating the original series, this would continue directly from it, and so Sylvester McCoy, who had played the Seventh Doctor in the original BBC series, returned to hand over the reins to the new Doctor, Paul McGann. One of the changes Segal made was to make the hero half-human, even though in the original and subsequent series, he was an alien Time Lord from the planet Gallifrey.

The episode was broadcast in 1996 on both BBC1 and the Fox Network. Ratings in the UK were great, with over 9 million people tuning in to see the new Doctor take his first steps. In America it was scheduled against the series finale of Roseanne, and subsequently had poor ratings. Fox chose not to make any more Doctor Who, and the full rights reverted back to the BBC.

The American Doctor Who pilot is available under the title Doctor Who: The Movie. Paul McGann has since returned to the role via spin-off audio CDs, mainly produced by Big Finish Productions in the UK. He also appeared in a special 40th Anniversary adaptation of Douglas Adams' unfinished Doctor Who adventure Shada, as well as starring in Night of the Doctor, a special short film made to celebrate Doctor Who's 50th anniversary.

Torchwood not only is a spin-off of Doctor Who, but the name is an anagram of it too. The series focuses around a top-secret organisation under the leadership of Doctor Who character Captain Jack Harkness, an immortal time-traveller from the future. This organisation investigates alien incursions that take place around Cardiff in Wales, a city located on a rift in the space/time continuum.

The original series was intended to be aimed at a more adult2 audience than Doctor Who. Broadcast on BBC3, the first series was very popular, although it was uneven in tone. Swear words and sex references seemed shoehorned in with the subtlety of a hammer, coming across like a 15-year-old desperately trying to grow a fluff-moustache in an embarrassing attempt to look old enough to drink alcohol. The second series, now promoted to a BBC2 slot, was more confident in tone. The third series, now only five episodes in length rather than 13 as before, was made as a five-part series. Entitled Torchwood: Children of Earth and now honoured with being broadcast on BBC1, this was an almost flawless piece of television. The acting by Peter Capaldi as John Frobisher3 the sympathetic villain was especially impressive; Peter Capaldi would to on to play the Twelfth Doctor in 2014.

Russell T Davies left Doctor Who, and indeed Great Britain, in 2010 and travelled to America with the aim of becoming a television producer there. His first project was to make a new series of Torchwood as a BBC/Starz Entertainment co-production. Set in both Britain and the United States, this was a ten-part series similar to Children of Earth, with a new American cast joining the surviving members of the original Torchwood team.

The series' premise was that no-one is able to die. There were new characters, including a paedophile villain, as well as Star Trek actors John de Lancie and Nana Visitor appearing in minor roles. Unlike the original series, gratuitous nudity and sex scenes appear - 40 seconds of footage were edited out of the UK's broadcast version. Critics felt that the story overall was stretched and it probably would have made an excellent shorter series as some episodes, including the second one that was almost entirely set on an aeroplane, felt like padding.

1Segal was not the first to investigate this; Terry Nation spent time in the late 1960s and early 1970s trying to interest American television companies in making a television series based on his creation, the Daleks.2After Titanic was released, people were joking that the BBFC's censorship age rule was 'One breast = 12, two breasts = 15'. Thinking about it, the original Total Recall featured a woman with three breasts, and that was rated 18...3Named after the character Frobisher the shape-changer who normally resembles a penguin that featured in Doctor Who Magazine comic strips in the 1980s.