American Television Reinventions: Game Shows Content from the guide to life, the universe and everything 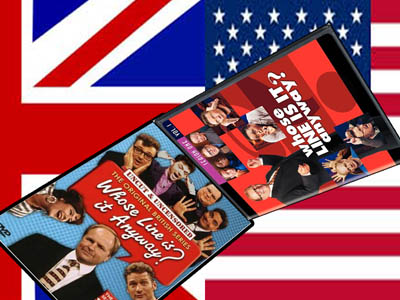 Drama and comedy programmes (while by far the most frequently adapted) are not the only programmes to make a crossover to the US. In recent times it hasn't been unheard of for gameshows to make the journey. This is something which has been happening for years in reverse - the American game show Wheel of Fortune, for example, has been adapted for the Australian market as well as in Britain.

Unlike with their drama and comedy programmes, television companies usually sell their gameshow formats worldwide. This means that the game show normally doesn't change a great deal when it is adapted for other countries. The hosts usually change (although even this is less of an occurrence than it used to be) but otherwise the format of game shows remains generally intact.

Following are some examples of these programmes, and comparisons between them.

This game show, featuring Anne Robinson as host, was well received when it first aired in 2000.

A general quiz show format crossed with a little bit of reality TV, it featured a group of contestants who would answer quick-fire questions from Robinson. At the end of each round they were allowed to 'vote off' one of the others, until finally there were only two remaining and they went into the final cash round.

An overriding reason for its success was Robinson herself, who had just the sort of biting persona needed to make it work. Her catchphrase when contestants were voted off – 'You are the Weakest Link, Goodbye' - became well known and has even been used once or twice in Parliament.

The sets and rules remained the same on the US adaptation, and Robinson herself even made the crossover in its initial season as the host. After the first season she was replaced by George Gray. Among the other countries worldwide to make an adaption was Australia, where host Cornelia Frances was doing a deliberate impersonation of Robinson's look and act on the UK version.

This Channel Four game show featuring Chris Tarrant as the host exploded onto our screens, becoming incredibly popular with viewers.

Contestants sat directly opposite Tarrant as he asked questions that rose in difficulty as the amount of money they were worth rose. Contestants who had not answered a question wrong could leave at any time and take the money they had earned so far, and there were two 'safe spots' where they were able to keep this minimum amount of money while also taking a chance to answer the next question. Contestants had lifelines which could potentially assist them. There was an element of gambling to the programme as you could take a stab at the multiple-choice question and possibly get it wrong, or you might get it right and make your way up the ladder to £1 million.

The 'dramatic background music' adapts itself as per the conditions, with a heartbeat being added as the questions get harder and harder. This adds to the drama of the situation, giving the programme something more than most game shows have.

A famous scandal in 2001 saw a contestant's friends and family in the audience using 'cough signals' to let him know the answers.

Almost exactly the same programme, the sets and background music remained identical to the British version. There have been different hosts, however, beginning with The Morning Show host Regis Philbin. There have been a greater number of contestants on this version who have won the $1 Million than on the UK original.

Whose Line is it Anyway?

Undoubtedly one of the greatest improvisational comedy shows ever, this was a successful television show both sides of the Atlantic.

Whose Line is it Anyway was a borderline gameshow/improvisational entertainment programme that appeared on our screens courtesy of Channel Four television in 1988. This one's odd, as it is in itself an adaptation of the 1988 BBC Radio series of the same name that featured host Clive Anderson moderating the antics of such performers as Stephen Fry and John Sessions. When it was adapted to television, Anderson and Sessions remained but the format got a complete makeover to become more digestible to the televised medium.

The idea of the series is that in each half hour episode Anderson would introduce four contestants, normally with at least one regular who appears on every programme while the others rotate and change. Anderson would introduce various 'games' and situations where the performers were given the basic idea or task and told to improvise something from it. Audience participation in the games was also important, as it allowed the performers to be thrown off guard by the suggestions.

As the years went on, many performers on the programme became famous in the UK because of it (including Sessions, Paul Merton and Tony Slattery) and it eventually survived a full ten years, finishing its British run in 1998. The regular ending of each programme featured Anderson 'picking a winner' and the 'winning' contestant's task was to read the end credits in a particular style, given by Anderson. This was a holdover from the Radio version, where obviously they needed somebody to read the credits at the end.

Many performers from across the Atlantic were regulars, especially Scottish-Canadian Colin Mochrie, Canadian-American Ryan Stiles and American Greg Proops1. This gave it quite a transatlantic flavour anyway and in some extreme cases Anderson was the only British performer in a particular show.

The final season (1998-9) was filmed in Hollywood and featured the basic line-up of the proposed US version of the programme. Anderson still hosted, but Richard Vranch, who had provided the improvised music since 1988, was replaced by his American counterpart Laura Hall. Anderson admitted that the last year was basically a hybrid programme to show American producers what the format was like to help it become successful in the United States.

Starting its first season as the UK version finished, this simply carried on where the UK one ended. The set was the same, with many principal performers (eg Ryan Stiles, Colin Mochrie and frequent guest Greg Proops) having previously appeared on the British version. The biggest difference to the initial format was that it featured American comedian Drew Carey as the host instead of Anderson.

There were some other changes to the format. Carey himself participated a lot more, especially at the end of every programme when the winner performed a sketch with him. This replaced the radio legacy of having the winner alone reading the credits2. Anderson later commented that he would have liked to have done this himself from time to time.

Another minor change to the format was that the performers did not rotate as often as they had in the British version. Stiles, Mochrie and Wayne Brady appeared on every show, as did musician Laura Hall who, in later seasons, was joined by her band. This left a single guest, who was often either Greg Proops or Brad Sherwood. Celebrity guest performers have included Oscar-winners Robin Williams and Whoopi Goldberg.

1Who later played podrace-host Fode in Star Wars Episode I: The Phantom Menace.2All the performers would join in to read the credits in an amusing fashion from the second series onwards, after a year of them passing without comment.