American Television Reinventions: Reality Content from the guide to life, the universe and everything 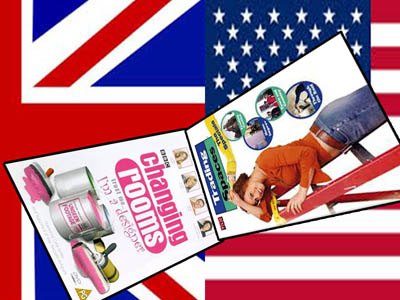 Many of the most popular television programmes broadcast across America today are reality genre, with a large number based on formats that originated in the UK. Reality shows, even those that give away vast prizes, are still cheaper to produce than a traditional programme requiring a large number of paid actors, writers, elaborate costumes and sets. Especially if it can make their money back through sponsorship, phone-in voting and/or competitions.

When it comes to reality programmes, television companies generally sell the formats worldwide rather than individual shows. These include [Insert Country Here] Idol and Antiques Roadshow (originally British), Big Brother (originally Dutch), Dragon's Den (originally Japanese), etc. As the format rather the original show is sold it is easy to adapt to new countries and cultures.

This then is a quick look at some of the reality shows that have been reinvented for American audiences.

One of the consistently popular reality shows both sides of the Atlantic are cooking programmes. After all, people everywhere need to eat and are constantly interested in discovering new recipes and ingredients. These shows range from total amateurs and/or small restaurants competing to impress world-renowned chefs, to programmes following well-established television chefs. Many programmes made in America actually feature British chefs.

The title is taken from the Orwellian saying 'Big Brother is Watching You' from the novel 1984. The show features a group of people who volunteer to spend a number of months together in a house while their every move is videotaped. Extraordinarily popular across the world, people at home are given the chance to 'vote people out' until the winner, the last one left at the end, gets the cash prize.

Originally conceived in the Netherlands, it was adapted worldwide, including British, American and Australian adaptations. Throughout all of them the basic formula remained the same.

A group of strangers are locked together in a house. They must each choose a bed in one of the dormitory rooms, divide the chores such as cooking and cleaning, decide on what food items are to be purchased and compete in contests that can win rewards for the house. Every week each contestant goes into a soundproof room to make comments about the others. At the end of the episode you could vote for your favourite. Whoever got the fewest votes was expelled from the house before the next filming, which was shown after the introduction of the following episode. All the cameras were hidden in the walls.

This is a programme that has been broadcast since 1979, featuring experts discussing possessions brought in by members of the public. An episode will typically take place in the grounds of a different stately home each week. Among the unusual objects are valuable antiques, family heirlooms and things that turn out to be worth very little. Despite this, many of the objects with little monetary value have fascinating stories behind them.

Since 1997 there has been an American version of Antiques Roadshow, in which a group of expert appraisers travel from city to city, rent a large hall and invite the public to have their treasures and junk evaluated for free. Like the original series, while the occasional valuable item is discovered, most of the heirlooms are interesting but basically worthless.

Of course, as well as direct reinventions, US television companies can use British shows and their American reinventions as the inspiration for their own comparable, though ultimately different, programmes. A very similar programme to Antiques Roadshow is Pawn Stars, in which people bring in items hoping to either sell them, or use them to secure a loan. The shop is located in the gambling Mecca of Las Vegas, Nevada - so many customers are sure they can win big with a few more dollars. In an example of a reinvention in Britain of an American programme inspired by an American reinvention of a British original, Pawn Stars UK started in 2013.

A television series in which Jo Frost, a professional nanny and childcare author, visits parents struggling with tantrumming toddlers and naughty children. By teaching the parents how to spend quality time with their children and also how to put them on the naughty step when needed, a more relaxed and beneficial home environment for both children and parents is created by the end of the episode.

An American spin-off entitled Supernanny USA was made in 2005. This had painful British stereotypes, featuring Jo Frost wearing Mary Poppins clothing and driving around in a London cab. It also had blaring background music, bullying viewers into feeling emotional at key points in the programme. Between 2011-13 another version, called America's Supernanny, was made with Deborah Tillman replacing Jo Frost.

The British version of the ultimate car show launched in 1978 and has been hosted by Angela Rippon, Noel Edmonds and Kate Humble. Since 2002 the show was hosted by the trilogy of James May, Richard Hammond and constantly controversial Jeremy Clarkson, as well as the mysterious tame racing driver known only as 'the Stig'. It became internationally successful and according to the Guinness Book of Records, was the most-watched factual series in the world. Following allegations of Clarkson having punched his producer, May, Hammond and Clarkson were replaced by Chris Evans1. and Friends actor Matt LeBlanc in 2016.

Moving away from reviewing cars and keeping motorists informed, the show now features celebrities racing cars around an aerodrome and motorised adventures in the world's most hostile environments, including the Arctic, the Sahara and Argentina. Special programmes have been dedicated to James Bond Cars while many of the specially adapted cars from the challenges themselves are on display at the National Motor Museum at Beaulieu Abbey.

An American version which is very similar to the UK original but with different hosts was made in 2007-10. It is expected that American presenter Matt LeBlanc will encourage US audiences to watch the original British version.

This was a gardening programme hosted by Alan Titchmarsh, the famously-braless water-feature-obsessed Charlie Dimmock, and builder Tommy Walsh. It was popular enough to be promoted to a BBC1 slot after the first series, attracting over 12 million viewers at its peak. The programme is often credited with popularising decking and water features in British gardens. After the show proved popular on BBC America, in 2003 Walsh and Dimmock, Will Shanahan and Kirsty King hosted an American version - Ground Force America.

In the original British series starring Carol Smillie and Laurence Llewelyn-Bowen, two friends or couples would swap homes and redecorate the others' house, ready for an unveiling at the end of the programme. The American version was called Trading Spaces and was regularly presented by Paige Davis. Again, two families switch houses for a week to remodel a certain room on a limited budget. When the families return home they are asked if they love or hate the changes.

An example of a reality show that was more popular outside its home country is Survivor. The idea behind the series involves a group of people stranded on a deserted island with little food or supplies and trying to survive. The idea was developed in Britain and pitched to the BBC by independent production company Planet 24, but the BBC made a documentary series entitled Castaway 2000 instead. Planet 24 pitched their programme to television studios all around the world, and it became particularly popular in America, launching in 2000 and still being shown at time of writing (2017). In the UK Channel 4 made two series in 2001-2, but it had little impact.

Originally a Channel 4 programme broadcast between 2003 and 2009, this concept involves two couples. In each couple, the 'wife'2 leaves her home and partner to stay for a two week period with the 'husband' of the other relationship to try to live their lifestyle. The cameras record what happens and interview all concerned to see whether or not this experience will later influence their lives.

An American series was broadcast on ABC in 2004-10, although it also influenced a similar programme broadcast on FOX entitled Trading Spouses, which was more family-orientated. In this, one of the parents, usually the wife, would spend time living with the other's family. At the end, each family was awarded a large sum of money that the visiting spouse would allocate as they saw fit. Many times a child would be given a musical instrument or tuition for special classes. Sometimes the family might be given a vacation, a swimming pool or a second car.

1The replacement team was not a success, Chris Evans only lasted one season and the series continued with Matt LeBlanc at the helm.2Although the majority of episodes involved husband-wife couples, same-sex relationships also featured.