'Bee Movie' - the Film Content from the guide to life, the universe and everything 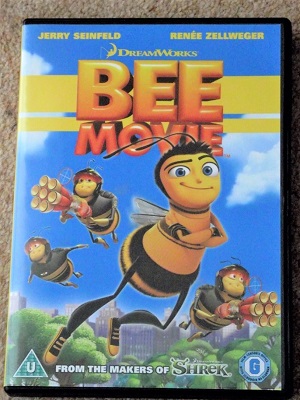 Bee Movie is a computer animated film produced by DreamWorks. It was released in 2007, costing about $150 million to make. It grossed about $127 million in US cinemas and $161 million outside the USA, making it a modest success overall. Bee Movie was written by a team including Jerry Seinfeld and was directed by Steve Hickner (who had co-directed DreamWorks' second animated film The Prince of Egypt), and Simon J Smith.

In the film, it is time for young bee Barry B Benson to find a job in the hive. Daunted by the prospect of doing the same thing for the rest of his life, he contemplates his place in the universe. When he finds himself outside the hive, his life is saved by Vanessa, a human. He breaks the rules and speaks to Vanessa, so they strike up a friendship. Barry discovers the honey industry and decides to go to court to claim the rights of the bees. However, his actions have unintended consequences for the world and for Vanessa's flower shop. Can he put things right?

Barry B Benson is voiced by Jerry Seinfeld, of TV show Seinfeld fame. Reluctant to be like everyone else in the hive, Barry learns more about the world through his unlikely friendship with human Vanessa.

Vanessa Bloome is played by Renée Zellweger of Bridget Jones's Diary fame. Bee Movie was her second DreamWorks film - she had previously provided a voice for a fish in Shark Tale. Vanessa is a florist who finds she enjoys the company of little Barry but struggles to live with the consequences of his court case when her supply of flowers starts to die out for lack of pollination by bees.

Matthew Broderick voices Adam Flayman, a bee who is Barry's best friend. Broderick played the lead in Ferris Bueller's Day Off (1986) and had a variety of film roles before Bee Movie, as well as providing the voice for Simba in Disney's The Lion King. Unlike Barry, Adam is excited to take his place as a worker in the hive, playing a role in the making of honey. However, when Barry decides to go to court, Adam loyally joins him even though it nearly costs Adam his life after he stings the opposing lawyer.

Barry's parents Janet and Martin are voiced by Kathy Bates (perhaps best known for the 1991 film Fried Green Tomatoes) and TV and film producer Barry Levinson respectively. Janet and Martin are happy with the jobs they were assigned in the hive, so they can't understand why Barry is struggling.

Patrick Warburton plays Ken, Vanessa's partner, who is allergic to bee stings, so he fears Barry. He's also jealous of Barry's friendship with Vanessa, so is keen to eliminate his opponent as soon as he gets a chance. Patrick Warburton appeared in Seinfeld and provided the voice of administrative assistant Kronk in Disney's The Emperor's New Groove. He went on to play similar Alpha Male Jeff in the TV sitcom Rules of Engagement.

Lawyer Layton T Montgomery uses harsh tactics to try to win the case, stirring up the bees in the hope that he will gain the sympathy of the jury after being stung. He is voiced by John Goodman, who is known for a wide variety of film and television roles including Fred Flintstone in the live-action version of the classic cartoon. He is also the voice of Sulley in Disney Pixar's Monsters Inc and llama herder Pacha in The Emperor's New Groove.

Comedian Chris Rock plays Mooseblood, a mosquito who gets a taste for the law1 after meeting Barry. Chris Rock had previously starred as Marty the zebra in DreamWorks' Madagascar. Actor, producer and chat show host Oprah Winfrey plays Judge Bumbleton and Megan Mullally, best known as Karen in the TV series Will and Grace, has a cameo role as the bee who takes Barry and his fellow graduates on a tour of the hive. Rip Torn, the voice of Zeus in Disney's Hercules, plays the leader of the Pollen Jocks.

There are also cameos by famous people who play themselves and feature in animated form. Ray Liotta, known for the gangster film Goodfellas, is the figurehead of a honey company2. The Emmy Award he received for a role in TV medical drama ER also appears in animated form. The aptly-named singer Sting appears as a witness in court, and we also see him levitating during a yoga session. Bee Larry King appears on TV in the hive because 'in any universe there would bee a Larry King'. Disney's version of Winnie-the-Pooh makes an appearance, too - as a 'hunny' eater, even he is not immune to the bees' demands. He gets sedated so that they can take their honey back.

For animated films, actors generally record their lines separately and then the soundtrack is edited together. However, DreamWorks had found when working on the earlier film The Road to El Dorado that if two actors recorded scenes in the same room, it improved the interaction between them. Jerry Seinfeld and Renée Zellweger therefore recorded the dialogue between Barry and Vanessa in the same studio. This technique was used for Barry and Adam's dialogue too.

In many ways, the film is true to life. Within a beehive there are several different jobs that need doing by honeybee workers, such as making honey, raising new bees and going out of the hive to collect nectar and pollen. Bees are vitally important for pollinating flowers, enabling seeds to form so that new plants can grow. In particular, humans harvest the honey that is created by honeybees, but that could be viewed as exploitation.

However, like the earlier DreamWorks film Antz, there are many ways in which the film takes liberties with real life in order to make the film more appealing or more spectacular. So that the bees are not too alien to the film's human audience, all the bees have two arms and two legs instead of six legs. Inside the hive, the honey is made by a variety of fantastic machines, and Barry drives round the hive in a car. The most notable difference is that honeybee workers are actually all female, while drones are male. Barry being male would only have one job to do, which would be to find a queen bee to mate with. A film with a predominantly female cast must have been out of the question, sadly.

For some years DreamWorks founder Jeffrey Katzenberg had wanted Jerry Seinfeld to appear in a DreamWorks film but, as a comedian, Seinfeld was not comfortable performing other people's material. The solution was for Seinfeld to play a role in the writing of a film so he could star in it too. He liked the title 'Bee Movie'3 and then came up with a huge number of ideas for jokes and plot points that were honed into the finished film over a period of three years.

The humour in the film ranges from visual gags that children would enjoy to comedy that would be appreciated more by adults. For example we see Barry using a pin as a fencing sword, and when he is chatting to Vanessa over coffee he jokes that he can't drink too much of it otherwise he will be up for the rest of his life. Some jokes were rejected by Seinfeld, such as one about a fax machine operated by a bee's sting. Other jokes that were not rejected have still dated, such as when Barry sees a portrait of a queen bee who he thinks is not attractive enough, he calls her a drag queen.

The animation itself displays excellent attention to detail. The honey is well depicted as it flows through the processes inside the hive. The toy furniture that Barry uses when he visits Vanessa is very realistic, complete with branding. We even see a bee playing Solitaire with hexagonal playing cards.

The interaction between Vanessa and Barry is cleverly staged, with Barry often being situated closer to the camera so he appears to be relatively large. This makes the characters seem more alike, rather than just being a human talking to a small insect, so their developing friendship makes sense in the context of the film. Their interaction was also influenced by the relationship between the young Ben Braddock and the older Mrs Robinson in The Graduate (1967), a film that made an impression on Jerry Seinfeld.

The music is well-chosen to fit in with the film. Scenes of honey being created from nectar are accompanied by the song 'Sugar Sugar'. The Beatles gave permission for DreamWorks to use the George Harrison song 'Here Comes the Sun' after manager George Martin had visited the studio, and it made an excellent feelgood ending for the film.

Bee Movie was released on DVD in 2007. Extras include audio commentary by Jerry Seinfeld with the directors, producer and editor, 'making of' features, interactive guides to all things apian, quizzes and games. The DVD also contains games and pictures that can only be viewed on a computer.

The Bee Movie Game for PlayStation 2 was released in 2007. It offers players a variety of mini-games and activities including puzzles, car driving, bee-flying and pollen shooting.

1Referencing the joke that the only difference between a lawyer and a mosquito is that a lawyer is a bloodsucking parasite with a briefcase.2Inspired by Paul Newman's work as the face of his own range of sauces.3Not least because it sounds like B-Movie, so there was comic potential from the start.