Oprah Winfrey - Talk Show Host and Philanthropist Content from the guide to life, the universe and everything 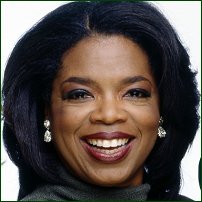 Girls' and women's friendships are often built on trading secrets. Winfrey's power is that she tells her own... When a guest's story moves her, she cries and spreads her arms for a hug.
Time 100: Oprah Winfrey

Oprah Winfrey is an Emmy Award1-winning American entrepreneur who has inspired over 48 million people in America alone to watch her talk show, The Oprah Winfrey Show. She is also a book critic, magazine publisher, actress and one of America's richest women. People are drawn to Oprah Winfrey as she has the ability to connect with her audience. She will cry at sad events that have happened to her viewers, laugh at their jokes, confess secrets and address personal issues - with particular focus on women. The air she has about her could be likened to that of a best friend – someone who can relate to you on difficult issues, such as drugs or weight.

All my life I have always known I was born to greatness.
Oprah Winfrey

Oprah Gail Winfrey was born in Kosciusko, Mississippi, USA on 29 January, 1954 to unmarried parents Vernon Winfrey and Vernita Lee. Originally, her first name was to be 'Orpah', after a biblical character, but it got misspelled on her birth certificate and Oprah became her name. Soon after her birth, her parents split and she was sent away to live on a farm with her grandmother. Winfrey recalls, 'She certainly wasn't an educated woman, but she taught me the shape of letters, and she taught me my Bible stories'. Winfrey became able to recite passages from the Bible with ease and because of this was soon nicknamed 'The Preacher'.

[People] would say to my grandmother, 'Hattie Mae, this child sure can talk. She is the talkingest child'. I received my sense of value, my sense of esteem, my sense of who I was, my sense of well-being, from speaking out loud.
Oprah Winfrey

When Oprah was six she went to live with her mother in Milwaukee, but at the age of 13 she ran away from home because her cousin (and other people) had sexually abused her. 'I was, and am, severely damaged by the experience [of abuse]. All the years that I convinced myself I was healed, I wasn't; I still carried the shame, and I unconsciously blamed myself for those men's acts'. After faking a burglary to get her mother's attention and running away from home several times, she was sent to a juvenile detention home, but there was no room for her, so she travelled to Nashville where she lived with her father. At the age of 14, Winfrey took drugs, rebelled and lost a baby. Despite all this her father stood by her, and together they rebuilt her life and Winfrey learned to live by his strict regimes. His rules included writing a book report every week, learning five new words a day and making sure her schoolwork was done well.

As strict as he was, he had some concerns about me making the best of my life, and would not accept anything less than what he thought was my best.
Oprah Winfrey

As a result Winfrey excelled at school and jumped two grades. She won a scholarship to Nicolet High School in the Milwaukee suburb of Glendale, Wisconsin. Winfrey was popular with both her peers and the teachers. She also joined her school drama club and, on reciting a speech called 'The Negro, the Constitution, and the United States', won herself a scholarship to Tennessee State University, where she achieved a BA Honours degree in Speech Communications and Performing Arts.

The opportunity to have a voice and speak to the world everyday is a gift. And I thank you for allowing me this gift.
Oprah Winfrey

At the age of seventeen, she was crowned Miss Fire Prevention, which, despite the name, is a beauty pageant. Having heard her speeches, the sponsor of the beauty pageant (radio station WVOL) gave her a job as a news reporter. The following year she won the Miss Black Tennessee beauty pageant and competed in the Miss Black America competition. However, due to her studies and news career she opted out of appearing in further pageant contests. Two years later Winfrey joined WTVF-TV, becoming the station's youngest anchor ever and the first female African-American news anchor in Nashville. Then, in 1976, she moved to Baltimore and co-presented The Six O'Clock News on WJZ-TV. Despite all this, her talent as a talk show host did not really shine through until 1978, when she worked for WJZ-TV on a programme called People Are Talking and hosted another programme called Dialing for Dollars.

In January, 1984, Winfrey signed up to WLS-TV and gave AM Chicago a new look, with stories on current and controversial issues. Within a year Winfrey had made the show a success, rivalling Chicago's other talk show Donahue. In September, 1985 the show was expanded to an hour and renamed The Oprah Winfrey Show. The programme is due to run till 2011. Memorable moments from the show so far include:

In 1986, Winfrey founded her own production company, Harpo2 Productions, Inc. Her company has produced many films and TV programmes, such as The Women of Brewster Place, The Wedding, There Are No Children Here, Before Women Had Wings and Beloved, all of which encourage black authors to make themselves be better heard. Winfrey told Ms Magazine, 'I'm starting a minority training programme ... specifically to bring more people of colour into the film and television industry as producers'. Harpo also bought The Oprah Winfrey Show, which later went into national syndication and became the highest-rated talk show ever. Over 49 million viewers in the US tune in every week and the programme is distributed to 122 other countries. The Oprah Winfrey Show also led to her being cast as Sofia in Steven Spielberg's film The Color Purple. The film later became a Broadway musical and Winfrey received an Oscar nomination - this encouraged her to co-found Oxygen Media, although she has since left the company.

Winfrey and Hearst Magazines have also teamed up to produce O, The Oprah Magazine, a monthly women's lifestyle magazine which is read by over 2.3 million people in America alone. The magazine was later released in South Africa, and in light of the magazine the website Oprah.com was founded. Oprah's website has been visited by many of her fans and through it she has raised money for the victims of Hurricane Katrina. Another magazine called O at Home has also been released, featuring articles on how to take care of a home. Adding to this success, she has co-written five books and also owns a radio channel called Oprah and Friends.

In 1991 Winfrey supported the National Child Protection Act, which aimed to establish a national database of convicted child abusers. The case was taken before a US Senate Judiciary Committee on behalf of a National Child Protection Act and on 20 December, 1993 President Clinton signed the 'Oprah Bill'3 into law. That same year she was awarded the Horatio Alger Award, and in 1994 was inducted into the Television Hall of Fame. Winfrey has achieved many other awards over the years, including Emmys for her successful talk show.

I am finally at a point in my life where I'm doing the kind of shows I've always wanted to do, helping people see themselves more clearly and to make choices that lead to more fulfilled lives. We're still running on.
Oprah Winfrey

During the latter part of the 1990s Oprah formed 'Oprah's Book Club', through which she promotes a variety of books to her viewers on her talk show. Once these books have been discussed on her show, they take on the 'Oprah Effect', in that they become instant bestsellers. The book club met with some controversy though over her endorsement of James Frey's book A Million Little Pieces, as it soon became clear he had embellished upon his ordeal with drug addiction. When Winfrey found out, she felt the author had misled her and withdrew her support for the book. Since then she has found it increasingly difficult to pick books that she feels are worthy of being in the book club.

Oprah has also helped underprivileged people to lead better lives through her founding of Oprah's Angel Network. The charity has come to the rescue of families who suffered in the wake of Hurricane Katrina, has helped those with AIDS in Africa and other countries worldwide, and was behind the setting up of the Oprah Winfrey Leadership Academy for Girls in Johannesburg.

In the past Winfrey has been romantically linked to high school sweetheart Anthony Otey, fellow University student William 'Bubba' Taylor and Randolph Cook. However, none of these romances lasted as long as her present relationship with Steadman Graham, a former pro basketball player and public relations executive, whom she met in 1999. Together they established a leadership course at Northwestern University. Despite their long-term relationship the couple have no plans to marry. Oprah is also passionate about her dogs. Up to the time of writing (September, 2007) she owns two cocker spaniels and three golden retrievers. Another dog, Gracie, sadly passed away in May, 2007.

Winfrey's best friend is Gayle King, who has also been a news anchor and talk show host. King's latest job is editor of O, The Oprah Magazine and Winfrey is so fond of her that she has set her up on numerous blind dates and the pair go shopping together.

When Winfrey faced a libel trial after she announced on her show that she wouldn't eat burgers due to cattle having BSE, she took Dr Phil and his company Courtroom Sciences with her and won. Dr Phil was given a slot on The Oprah Winfrey Show and later a show of his own under Winfrey's Harpo brand. Her company also moved on to create the film adaptation of Zora Neale Hurston's Their Eyes Were Watching God (1937). Towards the end of the 2006, Harpo and ABC teamed together to reveal plans for two new reality TV shows; one of these shows was to be called Oprah Winfrey's The Big Give, in which people competed to find ways to have an enriching impact on other people's lives; the second show, entitled Your Money or Your Life, was to see a team turning around the lives of a family. Winfrey has also lent her voice to Bee Movie, scheduled for release in 2007.

Winfrey's life is a true rags-to-riches story. Now that she has reached legendary status, is there any stopping this dynamic woman?