The Golden Retriever Content from the guide to life, the universe and everything 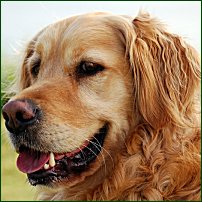 Due to its outgoing, confident, sociable, loving temperament and sturdy appearance, the Golden Retriever is adored by many people, who view the dog as a great family pet. Originally, Golden Retrievers were bred to hunt alongside their owners. An owner would shoot down an animal such as a rabbit or small bird and the Golden Retriever would obediently run to retrieve the dead animal for its owner. The Golden Retriever's breeding predisposes it to drag home animals; however, some training is usually required to bring out this predilection. Golden Retrievers are also very protective of their owners and therefore it is not unusual to hear about them in rescue incidents. They make excellent guide dogs for the blind.

Due to their long coats, Golden Retrievers require frequent brushing. At least once a day should be sufficient if they are not shedding their coat. It is best to brush the animal outside in order that the hairs don't cling to the furniture indoors. To get them used to brushing, it is best to introduce them to being groomed when they are a puppy. When grooming, always check to see whether your dog is free from fleas and other pests. Toenails should be kept short; vets and grooming parlours can trim them down. However, it is not always necessary for a person to cut them as pavements and other solid surfaces can help keep them short. The teeth need to be checked and can be brushed. Also check their ears for mites and grass seeds, and clean them if necessary.

The Golden Retriever has won many a heart over the years due to its temperament. It is loyal, intelligent, obedient and friendly towards humans and other fellow dogs and has an outgoing personality. They are very protective of the people they live with, often announcing the arrival of the postman or any strangers. However, if they are left alone for long periods of time they will get bored and start misbehaving. Some Golden Retrievers have even attacked people.

Golden Retrievers have appeared on the children's television show Blue Peter for several years now and some of their dogs have been puppy-walked for the Guide Dogs for the Blind. Puppy-walking on Blue Peter took place in the 1970s and 1980s, and more recently in 2007 with a dog called Magic, whose ancestors have also been on Blue Peter.

Celebrities who own Golden Retrievers are: