Penguins for Neighbours - the Post Office at the End of the World Content from the guide to life, the universe and everything 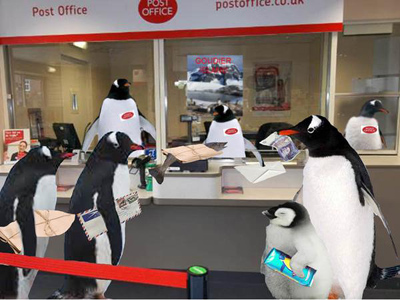 On the tiny Goudier Island in Antarctica1 there is Port Lockroy Post Office and Museum. It was originally the research station which was established in early 1944; this was manned until 1962. In 1996 the research station was restored and converted into a museum open to visitors during November to March (the Antarctic summer). The UK Antarctic Heritage Trust2 runs the museum and the incorporated post office.

There's something about penguins which appeals to humans. They are cute, family-oriented, comical birds who seem more at home in water than on land, even when they're belly-sledging. They can't fly, but they can speed through water like torpedoes. Thanks to nature documentaries, we all know the way they huddle together to shelter from bitingly-cold snow storms, taking it in turns on the outside of the group to protect their fellows on the inside. Many a tear has been shed over a mated pair's attempt to nurture a single egg which has resulted in disaster, dashing their hopes of parenthood for another season. Who could fail to be moved by their determination to perpetuate their species, against almost insurmountable odds? In reality penguins are far from cuddly – they are noisy, smelly, and can be quite vicious. They steal from each other and occasionally exhibit salacious behaviour. Studying their behaviour in a research capacity must be like following an avian soap opera.

Gentoo3 penguins arrived on Goudier Island around 1985, serendipitously providing their fans with an opportunity to see them in a natural habitat. Cruise companies feature this fabulous stop-off in their itineraries and now some 18,000 tourists visit the facility annually in the hope of getting up close and personal with their favourite birds. Hence the post office and gift shop! There you can buy a multitude of penguin paraphernalia, and, of course, unique penguin stamps for your penguin postcards. If you can write them up in time, you can post them there and receive a much-coveted Port Lockroy Post Office frank mark (stamped by hand).

During the 2014-15 season some 70,000 postcards were sent to over 100 countries. Bear in mind that this is snail mail, so the postcard can take between two and six weeks to arrive at its destination, but the recipient will surely treasure it. No doubt quite a few photographs are taken of the charming birds themselves, so long as their colony is avoided as that is out-of-bounds to all but British Antarctic Survey researchers. Some people, including actor Hugh Jackman, have uploaded selfies with a penguin, but such a quest on Goudier Island should be approached with extreme caution and appropriate care to avoid any personal injury insurance claims.

Fancy getting away from it all? Quit the rat race for something completely different? Are you a hardy soul, willing to submit to sub-zero temperatures and isolation? This could be the job for you: a team of four people are recruited annually by the UK Antarctic Heritage Trust to monitor the penguins, staff the museum and run the post office on Goudier Island. The average Antarctic summer temperature is 0°C (32°F) but the wind-chill factor reduces this to −5°C, then there's the high chance of snow blizzards to contend with. Still interested? Then you would have to:

Anyone making the shortlist would have to be available for an additional five days of training in the September prior to departure. The salary is £1,100 (1,250US$) a month - not a fortune but no-one would do this job purely for the money. This is a privilege opportunity, much like working at Buckingham Palace. The scenery is beautiful almost beyond description, but staff don't get time off to explore it. If you're not too tired you can enjoy skies the energetic colours of fire as the Sun skims the horizon (during the Antarctic summer the Sun doesn't set), and if you're lucky there's a high probability of polar auroral activity. It's a dream job for a gap-year student or someone between jobs - and what an impressive entry on your CV! Here you can read the blog of the 2015-16 team where they have logged their penguin chick counts, enjoyed an incredible show of breaching humpback whales, watched a passing orca pod and celebrated two team members' birthdays.

If you can't apply for a job at Port Lockroy or make a personal visit, don't despair, you can still support the work of the Trust by purchasing items from their online shop, including Antarctic tartan4 accessories and Port Lockroy gentoo penguin logo clothing. The profits from sales benefit the Trust and help fund future research work.

Many thanks to the crew of the Aurora Australis for allowing the artist to use their original penguin pictures.

1Goudier Island is at co-ordinates 64°49'S, 63°30'W if you want to search for it.2The Trust's Patron is HRH The Princess Royal aka Princess Anne, the only daughter of Queen Elizabeth II and Prince Philip.3Their International Union for the Conservation of Nature (IUCN) Red List status is NT (Near Threatened).4The Antarctic (and Arctic) tartans were designed by Rosalind Jones of Mull. They incorporate the colours of the polar regions.