Isle of Mull, Argyll, Scotland Content from the guide to life, the universe and everything 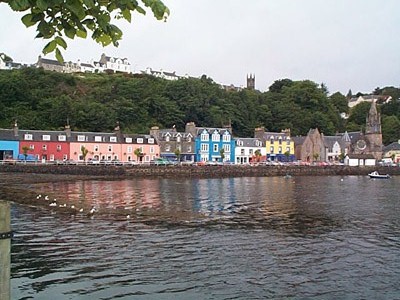 The Isle of Mull is a large island off the west coast of Scotland. It is one of the group of islands known as the Inner Hebrides1 and is the second biggest of these islands after the Isle of Skye.

Mull is roughly triangular with sides facing west, northeast and southeast. The west side is heavily indented with inlets, so that although the island is about 45km from north to south and about the same from east to west, nowhere is more than about 8 km from the sea. The terrain is hilly and mountainous, the highest point being Ben More at 990m. The population of Mull is about 2,700 and lives in villages around the coast, mostly in the largest town, Tobermory.

Mull is a beautiful, peaceful island, although the peace can be destroyed by RAF fighter planes flying low overhead at supersonic speeds - they use the Western Isles as their training ground.

The Northern End of the Island

Tobermory is a fishing port which now relies heavily on tourism. The buildings are painted in bright colours along the seafront, making this the most picturesque village in Scotland. There are plenty of restaurants and pubs, craft shops and so on. A ferry operates sporadically from here to Kilchoan, a remote spot on the Scottish mainland.

A peaceful and picturesque village on an inlet on the North coast.

Calgary Bay is a secluded bay with a beautiful sandy beach. Calgary in Canada is actually called after this place.

The Centre of the Island

Craignure is the port where most tourists arrive at Mull, on the Oban to Craignure ferry.

This little railway is worth a trip. The track is only about a mile long and goes from Craignure to Torosay Castle. It is a narrow gauge railway, with a gauge of just over ten inches. Most of the carriages are open affairs. Some of the engines are driven by steam and some are diesel-powered.

Torosay Castle is really a big house rather than a castle. It is surrounded by beautiful damp gardens.

This is the traditional home of the Chief of the Clan Maclean. Situated on a rocky outcrop at the corner of the island, it has good views across the sea on three sides. It looks a pretty well-defended castle.

The long peninsula which forms the south of the island is known as the Ross of Mull. In the east, where it joins the rest of the island, it is deserted, with forests and open moors, but at the west end there are many small villages. The most important one is Fionnphort, which faces the small island of Iona across a narrow strait. A ferry runs regularly between Fionnphort and Iona.

This is the port at the westernmost point of the peninsula. There's not much here except the ferry to Iona.

Leave your car in Fionnphort and take the ferry to Iona (about 15 minutes). Iona is a little piece of ancient civilisation in the wilds of Scotland. Here in the 6th Century, the monk Colm Cille, also known as Saint Columba, set up a monastery. Remote from any sort of civilisation, the monks passed their days in prayer and illuminating copies of holy books. It is possible that the Irish treasure, the Book of Kells was written in Iona.

The monastery operated until the 16th Century when Henry VIII closed down all the monasteries by royal decree. The remains of the Abbey and the Nunnery are still there for you to see.

Former Labour Party leader, John Smith (1938-1994) is buried in Iona along with such illustrious company as Duncan and Macbeth, kings of Scotland.

There are trips available to Staffa from Fionnphort, Iona and Ulva Pier. This is a basalt island formed by a volcanic eruption. The basalt cracked as it cooled and formed an amazing cliff of hexagonal pillars. You can walk around on the tops of these pillars (the smaller ones) and visit Fingal's Cave, a huge cave in the cliffs hollowed out by the sea. The German composer Felix Mendelssohn visited here in the 19th Century and was so impressed that he wrote a piece of music 'Fingal's Cave', also known as the Hebrides Overture.

If you climb the steps to the top of the cliff, you find yourself on a flat, grassy area. Be careful! There are dangerous cliffs all around you. Walk to the right as far as the green hill, sit quietly at the top of the cliff and puffins will come and sit near you. The puffins are tiny seabirds with enormous beaks, which give them a clown-like appearance. They live in burrows in the cliff.

It is possible to go on birdwatching trips to these islands west of Mull.

Harbour Porpoise and Minke Whales are common. Other sorts of cetacean are fairly common too. There are organised whale-watching trips from Tobermory, but be prepared for disappointment. The whales are wild animals and may not oblige.

There are three car ferries that operate to Mull. These are all operated by the Caledonian MacBrayne company: the biggest and most popular is Oban - Craignure. It is busy enough that booking is recommended. A smaller one is from Lochaline to Fishnish. There is also a very infrequent ferry from Kilchoan to Tobermory.

Allow twice as long for every journey as you expect. The roads are small and slow. Most of the roads are single track roads, wide enough for one car. Passing places are provided every 200m or so; if you meet a car coming the other way, one of you will have to reverse to the nearest passing place. This means that you can never really travel at more than 20 miles per hour.

Petrol is available freely throughout the island and there is a good repair garage in Tobermory, should you have a problem with your car.