Bette Davis, Actress Content from the guide to life, the universe and everything 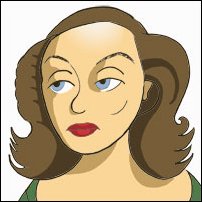 I've always had the will to win. I felt it baking cookies. They had to be the best cookies anyone ever baked. But there was a price to pay. If a man is dedicated to his work, he's more of a man. If a woman feels that way, she's less of a woman.
— Bette Davis

Bette Davis was known as 'The First Lady of the American Screen'. Over the years, she clocked up appearances in over 100 films, and in 1977 became the first woman to be honoured with the American Film Institute's Lifetime Achievement Award. She was also the first woman to be president of the Motion Picture Academy of Arts and Sciences, despite her reputation for being somewhat difficult to work with. Throughout her career Davis was instrumental in improving working conditions and creating better roles for women in film.

She will long be remembered for her striking looks. According to The Guardian:

She was not conventionally beautiful, but had a strong jaw, firm cheekbones, a radiant smile when she chose to employ it and those large, expressive eyes that in the 1980s were to be celebrated in Kim Carnes's song 'Bette Davis Eyes'.

A Star Is Born

Born Ruth Elizabeth Davis on 5 April, 1908, in Lowell, Massachusetts to Harlow Morrell Davis and Ruthie Favor Davis, she was later to adopt the stagename Bette Davis. Her father walked out on the family when she was nearly ten, and despite having little money, her mother sent her away with her sister to the Cushing Academy boarding school. On graduating, Davis tried for a place at Eva Le Gallienne's, but was refused on the grounds of her being too frivolous and insincere. Undeterred, Davis enrolled at John Murray Anderson's Dramatic School and was accepted. In 1923, she landed a bit part in The Earth Between, before making her first Broadway acting debut in Broken Dishes in 1929. Davis also appeared in Solid South and in 1930, she journeyed to Hollywood, where she took part in a screen test for Universal Studios. They hired her for six films, the first being Bad Sister in 1931.

Davis was dropped by Universal Studios in the 1930s and turned her focus to Broadway, but a phone call from Warner Brothers offering her a seven-year contract lured her back into film making. She signed up in 1932 and set about making The Man Who Played God, which was released that same year. She was then loaned out to RKO to play Mildred in Of Human Bondage, released in 1934 – her performance earned her an Oscar for Best Actress.

In 1935 two screen sirens, Bette Davis and Joan Crawford, came together to work on the film Dangerous, and both fell in love with the same man, Franchot Tone. The problem for Davis was that Crawford had beaten her to the man of her dreams:

I fell in love with Franchot, professionally and privately. Everything about him reflected his elegance, from his name to his manners... She took him from me. She did it coldly, deliberately and with complete ruthlessness. I have never forgiven her for that and never will.

Crawford was not the only problem Davis had in Hollywood. She was growing increasingly unhappy with the roles she was given, so travelled to England, where she hoped she would continue her successful career. However, Jack Warner sued Davis and she was forced to return to the US to fulfil her contract.

Returning to Hollywood, Davis was given a new contract and was provided with roles that were of a marked improvement. The only thing she wasn't given was the part of Scarlett O'Hara in the film Gone With the Wind, which she felt her personality would have suited perfectly. The role went instead to Vivien Leigh.

In 1939 Davis won her second Oscar for her role in Jezebel. She was named as the highest-earning woman in the US in 1942, and was nominated five years in a row for other Oscars. Sadly, those she won didn't keep her warm at night, and the statuette's figure reminded her of her first husband, childhood sweetheart and musician, Harmon Oscar (Ham) Nelson. 'When I saw the award's rear end, it reminded me of my husband's. Both flat', she said.

There are few accomplishments in my life that I am sincerely proud of. The Hollywood Canteen is one of them.

Davis was no dainty dame and was quite happy to drive around in a station wagon and do her shopping in jeans. During the Second World War she even joined forces with John Garfield to create the Hollywood Canteen for soldiers passing through Los Angeles. Reflective of New York's Stage Door Canteen, Davis transformed an abandoned nightclub into an inspiring entertainment facility. In the canteen Duke Ellington would play a piano donated by Cary Grant and other famous stars such as Crosby, Sinatra, Dietrich, Lamarr, Gable and Crawford put in appearances. It didn't matter whether you were black or white, rich or poor; everyone was welcome in the canteen, and if a fight was threatening to break out, Davis would instruct the band to play the 'Star-Spangled Banner' to quell it. The club was shut down in 1945, but her work didn't go unnoticed; in 1980 she was awarded the Distinguished Civilian Service Medal, the Defence Department's highest civilian award.

Davis wasn't averse to taking on roles that the fellow actors and actresses around her would not touch through fear that these roles would tarnish their career. In those days it was quite common that film viewers would look at the stars and liken them in real life to the characters they played. As Davis said herself: The more successful an actor, the less he or she gets to act. People come to expect a personality, and that's the kind of parts you get offered, ones to suit audience expectations of your star's persona. For this reason she satisfied herself by playing bad people such as the heroines of The Letter (1940) and The Little Foxes (1941), Stanley Timberlake in In This Our Life (1942) and Rosa Milone in Beyond the Forest (1942). However, by undertaking these roles her popularity waned.

It wasn't until 1950 that Davis was once again successful. Her famous comeback was in All About Eve (1950), where she played Margo Channing, an ageing Broadway star. The director William Wyler said: She's the perfect actress for the part, and whatever you expect from her, she'll give you more. She's the hardest worker you'll ever find, and you couldn't find a finer actress. Indeed Wyler was proved right in casting her, as the part led to her eighth Academy Award nomination.

Davis's career was given another lease of life in 1962, when she obtained the role of Baby Jane Hudson in Whatever Happened to Baby Jane. She appeared alongside her rival and arch-enemy Joan Crawford and the two led a lengthy bitter war throughout the making of the film. For example, Davis had a Coca-Cola machine installed on the set in order to upset Crawford, the widow of the Pepsi CEO. Crawford got her revenge by filling her pockets full of stones for a scene where she was dragged across the floor by Davis.

In later life Davis became known as a 'horror maven' and also made many television appearances. Then in 1987 she secured a role in The Whales of August, her last.

I'd marry again, if I found a man who had 15 million dollars, who would sign over half to me and guarantee that he'd be dead within a year.

Life off-screen was no bed of roses, either; Davis was married four times and linked to many lovers including Howard Hughes, Johnny Mercer and William Wyler. She had a child called BD (Barbara Davis Sherry) with her third husband, William Grant Sherry and adopted two children, Margot and Michael, with her fourth husband, Gary Merill.

In 1985 Davis underwent a mastectomy as a result of being struck by breast cancer, and nine days later suffered a stroke. To add to her agony and pain, her daughter BD released a book, My Mother's Keeper, that depicted her mother as being 'a mean-spirited, wildly neurotic, profane and pugnacious boozer, who took out her anger at the world by abusing those close to her'. Despite all this she was determined to work until her death, which came on 6 October, 1989, in Neuilly-sur-Seine, France. On her epitaph are written the words 'She did it the hard way', which, according to her son, 'isn't that she was complaining but that she had persevered'.

In memory of his adoptive mother, Michael Merrill and Kathryn Sermak set up the Davis Foundation, which financially supports budding future actors. In 1998 Meryl Streep received the first Bette Davis Lifetime Achievement Award at Boston University. The United States Postal Service has also celebrated her life by releasing a stamp commemorating 100 years since her birth.

In my view, she's one of the all-time great movie stars and actresses. I thought she was a great beauty, too. I just loved her looks. She is still quite a character, very determined and strong, and she refuses to concede an inch. I suppose that is what has kept her alive.
— Lauren Bacall

Bette Davis taught Hollywood to follow an actress instead of the actress following the camera, and she's probably the best movie actress there's ever been.
— Elaine Stritch