Cary Grant - Actor Content from the guide to life, the universe and everything 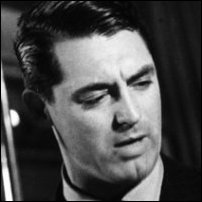 I have spent the greater part of my life fluctuating between Archie Leach and Cary Grant, unsure of each, suspecting each.

Cary Grant is a name that most of us recognise, but like all screen legends he lives in our minds as an uneven mixture of fact, fiction, image and reputation, kept forever young and fresh by age and death-retarding celluloid. As in the case of Humphrey Bogart, the passing of time has helped, rather than hindered, the legend. The name Cary Grant has become almost a metaphor for style, grace and good taste; especially in the art of comfortable and elegant seduction. As a light comedian he set standards that few have surpassed and he remains one of the few actors to top cinema box office for over 30 years. Now that we live in the world of endless channel television from cable and satellite, Grant the performer remains a ray of light among the banal and the dross. His best movies are out-and-out classics and he rarely gained a bad review, coming out of even the most misguided project (RKO's Sylvia Scarlett, for example, often regarded as an all-time classic 'bad' movie) with his shield undented.

Born Archibald Alexander Leach on 18 January, 1904, this Bristol-born actor was later to adopt the stage name Cary Grant and bear the character's self-created image and its responsibilities as well as anyone made of flesh and blood could. His father liked to drink and his mother was institutionalised when he was nine. Leach recalls that he returned home from school one day and was told that his mother had 'gone to the seaside'. Years later he was to learn that she was alive and living in a mental hospital. From then on he would visit her both there and in a home he bought for her, until her death in 1973.

His passion for theatre started when an electrician at his school, Fairfield Grammar, showed him what went on behind the scenes of the Hippodrome theatre. As Grant recalls: That's when I knew. What other life could there be but that of an actor? If any man can claim themselves to be 'all my own work' it is Grant - self-taught in everything from business to acting. Only in the world of acrobatics can he claim any help or schooling: he ran away from home at the age of 14 to join the Bob Pender comedy troupe that toured in England. Grant was tracked down by his father in Ipswich and returned to school. His music teacher threw a set of keys at him after he was caught not singing and was suspended from school after peering into the girls' toilets. He rejoined the troupe and in July, 1920 was picked to perform in the US.

He wasn't averse to admitting his luck. He was lucky that his large (6 feet, 1 inch) frame and good looks (nearly all gifts from his father, his mother was short 'with an olive complexion') made him a natural choice for the Bob Pender troupe. He fell in with the right people almost as soon as he hit the US (with the same company) and he was in constant - if not well-paid - work after he decided to stay on1. No washing dishes and flop houses for him. The worst job he had was as a stiltwalker, which did nothing for his fear of heights. Among the best were theatrical roles such as in the musical Golden Dawn.

From Stage to Screen

In 1931, Leach sought a contract with Paramount and in doing so decided that Grant and Leach should marry and merge, and so become one. A kind of off-stage/on-stage marriage to ease the burden of living a life of pretence. As the Rolling Stones once sang 'now we are pillars of society, we don't worry about the things we used to be'. The problem was that Archie Leach, the penniless boy from the provinces, would not quite let go. His first film role with Paramount was in This is the Night. Released in 1932, this film acted as the catalyst for Mae West to snap him up for I'm No Angel and She Done Him Wrong. He followed these films by appearing alongside Katherine Hepburn in the film Sylvia Scarlett.

Grant turned his back on Paramount in 1937 by going freelance, showing that you can live without the machine at your back. Many that followed (Errol Flynn, for example) found only quicksand. While Grant had gambled on the American Dream and being freelance, it would be the last real gamble he would take. He was one of the most commercial of actors, rarely choosing a part that had poor box office potential. Finding his path to success lay in screwball comedies, he took on many a role that saw him team up with Katherine Hepburn, such as Bringing Up Baby, Holiday and The Philadelphia Story. A lot of his comic timing was taken from the stage (where he spent some of his early days) and included the double-take (sometimes overdone), the delayed-reaction and the stop-dead-with-shock. Perhaps his best-kept secret was that he was a good looking man who never acted like he was, even being prepared to take an ego-deflating pratfall. He lacked the ability to do accents and never attempted them: In I Was A Male Warbride released in 1949 he is supposed to be French, but makes no attempt to alter his vocal technique. He turned down the lead in My Fair Lady because: The way I talk now, is the way Eliza talked at the beginning. In late career he became frightened of becoming a 'dirty old man', so the scripts would be rewritten to make him more the quarry rather than the chaser.

Like film stars throughout the ages, he represented the man that many of the public wanted to be: so for Alfred Hitchcock he was an ideal actor and was cast in Suspicion, Notorious, To Catch A Thief and North by Northwest. For Hitchcock, Leach was his alter ego, living out his fantasies with the unobtainable woman in his films.

Grant was also an intensely private man, which leaves many of his career choices and decisions unrecorded. He could duck difficult questions with greater ease than the average politician. There was never going to be an autobiography (beyond his little-seen mini-work published in various magazines in the early 1960s) no matter how many millions were dangled in front of his nose.

Naturally his secrecy threw up rumours, such as that he was secretly gay. Marc Eliot, author of Cary Grant, maintains that the fact that Grant shared a house with Randolph Scott (himself not a homosexual) after his first marriage broke down is reflective of the fact he was bisexual but Chris Petit, writer for the Guardian, believes this to be unproven.

Five marriages and four divorces are testimony that he found romantic life off-screen harder than on it. There were affairs, sometimes with those of equal fame such as Sophia Loren, but not without guilt and self-recrimination. His marriages could be generously viewed as a desire to 'do the right thing' and they certainly show a lack of emotional maturity and forethought. Marrying people that you have little in common with (his own words) and then staying away for long periods (although often in the line of work) is hardly a recipe for success. A friend said that Grant was like a little schoolboy in his love life, always believing that the first flush of romance was the opening to a whole new horizon, only to be disappointed by the reality of day-to-day marriage. His last marriage was to a lady in her early 20s (Barbara Grant-Cohen). With the greatest of respect, the kind of age-difference is rare outside of money, power and position.

On Being A Father

He desperately wanted children and regretted only being able to produce one of his own, Jennifer2 in 1966, with his fourth wife Dyan Cannon. The birth of his daughter led him to be the only genuine star to quit at the top of his game and remain retired. No television specials, no chat shows, no commercials, nothing. And just when he looked to have thrown off all the shackles of the showbiz world he started to do one-man-shows around America that formed a kind of on-stage biography with a question and answer session. During the 1980s he was taking part in a one-man show called 'An Evening With Cary Grant' in the out-of-the-way town of Davenport in Iowa when he had a major stroke and died. In his will, which he wrote on 26 November, 1984, he asked for his body to be cremated, for there to be no funeral service and for his ashes to be scattered in the Pacific Ocean.

Leach's family complied with his wish that he was to be given no funeral service, but two years later his last wife, his daughter and the family of Prince Rainier III of Monaco led a star-studded night celebrating his life, with proceeds going to the Grace Kelly Foundation. The Cary Grant legend was also preserved in the form of a new statue erected in his home city, paid for by fans and admirers from all around world and created by the same artist (Graham Ibbeson) who made the statue of Eric Morecambe. In 2004, a documentary reflecting upon his life was released at the Cannes film.

Cary was the most extraordinary person I have ever met. He was a star but always remained down-to-earth. This is a wonderful film which looks at the real Cary Grant.
- Barbara Grant

In final summation, Grant moved away from a great many people in his life. He even moved away from his country of birth. But somehow he kept himself emotionally close to everyone he knew and met. You would search long and hard for a serious person with a bad word to say about him - in life or in death...

1The troupe returned to England after 456 performances of Good Times2Like many fathers he didn't want his daughter to enter showbusiness, but she disobeyed him anyway, appearing in the television series Beverly Hills 90210.