The HP Sauce Story Content from the guide to life, the universe and everything

That this House deplores the retention of the picture of the House of Commons on HP Sauce labels following the decision by new owners Heinz plc to remove production from the historic Aston site to Holland, making the 125 employees redundant; believes that Heinz should not exploit this symbol of Britishness to sell a product no longer made in the United Kingdom; and calls upon the Administration Committee to remove HP sauce from all House dining areas until the jobs are reinstated or the House of Commons picture is removed from the label.
- Early Day Motion 2728, House of Commons, 12 October, 2006.

When the Liberal Democrat Member of Parliament for Solihull, Lorely Burt learned of the closure of a nearby factory, she immediately lodged a parliamentary protest. Sadly, her attempt to remove the offending brown sauce product from the House of Commons canteen and hold it hostage was doomed to failure: only 42 of her colleagues signed up to the motion. Maybe the others had their own factories to protect. Maybe they believed in market forces. Maybe they didn't much like HP sauce - it is an acquired taste, after all. In any event, this was only the latest episode in a long and eventful history of this uniquely British condiment. 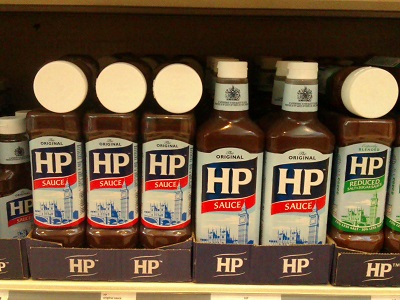 Let's face it, British cuisine is pretty uninspiring. Not having the climate to grow the full range of fresh ingredients and exotic flavourings, nor the will to experiment Gallic-style with intricate culinary practices, Britons instead developed a functional diet of meat-and-two-veg. This they cooked as simply as possible: usually boiled to a mush, or roasted or fried to a crisp. They chose sauces to disguise the utter desolation of its blandness, and these were liberally applied at the table. A few, like horseradish and mint, were readily makeable, but others were patent concoctions emerging from the dark satanic grime of the Industrial Revolution.

HP Sauce is a vinegar-based brown sauce, invented in the latter decades of the 19th Century. Its origins are not entirely clear. One version has it concocted in the 1870s by Mary Moore, the wife of Edwin Samson Moore, owner of the Midland Vinegar Company in Aston, Birmingham. Mary's palate-scorching recipe used many of the exotic spices which had started to arrive from India. The formula is a closely-guarded secret, but inspection of the bottle today will reveal ingredients such as malt vinegar, tomatoes, molasses, spirit vinegar, sugar, dates, salt, cornflour, rye flour, tamarind, soy sauce, spices and onion extract. It is labelled as suitable for vegetarians.

Moore purchased the intriguing brand name from one of his vinegar customers, Nottingham grocer FG Garton, supposedly in lieu of a debt, and he launched HP Sauce onto an unsuspecting British public in 1903. It is not clear what HP originally stood for, but Moore was a shrewd marketer, and labelled the bottles with a picture of the Houses of Parliament, claiming that it was served in the canteens there.

Other stories exist, however, including one that both the recipe and the parliamentary rumour belonged to Garton himself. Another version attributes the HP to one Harry Palmer, sauce-maker and horse-racing fan, who first produced it as Harry Palmer's Famous Epsom Sauce, in 1899.

The parliamentary label was only one of Moore's marketing gimmicks. Launching it nationally, he toured the country, distributing free miniature bottles from miniature covered wagons pulled by Shetland ponies and donkeys. In fact, Moore originally planned to use zebras, but abandoned the idea when he discovered how difficult they would be to train.

From 1917, one panel of the bottle's label was printed, for no particular reason, in French:

This was plainly not aimed at French speakers. This bottled brand of GBH of the tastebuds is about as far removed from French cuisine as it's possible to get, and the sauce was never marketed there. It served to stimulate conversation at the dining table in a Britain where knowledge of exotic foreign languages was even more rare than it is today. This quirky addition to the brand image stuck; indeed, the eventual removal of the panel in the 1980s provoked a flurry of letters to The Times:

Sir,
Am I alone among your readers in deploring the loss of that much loved and most piquant of French primers - the label on the HP Sauce bottle?
If unfortunate circumstances decreed that there was nothing else to read at the breakfast table one could always turn to the HP Sauce bottle for a little French revision. It will be sadly missed.
- Dr JH Hunter, Frampton On Severn, Gloucestershire.

The brand launch was a huge success and the HP sauce bottle became a permanent fixture on the dining tables of both homes and greasy spoon cafés throughout the land, as well as in expatriate communities. American fans of the spicy stuff include Tom Hanks and Mike Tyson, who may have been introduced to it by fellow boxer Frank Bruno1. American-based Rolling Stones guitarist Keith Richards is reputed to order it by the caseload, which may explain his rugged complexion.

When MP George Galloway returned from his meetings with Iraqi leaders prior to the last Gulf War he reported that Foreign Minister Tariq Aziz always has a bottle of HP Sauce on the table2. As this occurred during a trade embargo, it was suggested in the press that Aziz must have been smuggling the bottles over the border from the United Arab Emirates. In fact the sauce is exported to around 70 countries worldwide, with well-developed markets in China, Mexico and Iceland, among others.

Celebrity chef Jamie Oliver is also said to be a fan, although we can't quite see him dipping Turkey Twizzlers in the gunk. As with many food labels, bottles of HP sauce bear the Royal Arms insignia: 'By Appointment to Her Majesty the Queen'. We can only speculate on the identity of the Buckingham Palace HP Sauce junkie until it appears in the next 'spill the beans' scandal.

Perhaps the most famous user was Prime Minister Harold Wilson, who became forever associated with the brand after his wife Mary let slip to a journalist that he drowned all his meals in the stuff. Many years later Wilson denied this, claiming that his weakness was in fact for Lea & Perrins Worcestershire Sauce.

He manages to retain a little of the working-class-lad-made-good appeal... The HP Sauce style of leadership is a style, so long as it is abnormal.
- Peregrine Worsthorne, describing Harold Wilson in 1971.

Things seemed to be going so well for the family firm. They saw off two World Wars, quietly expanding their business at the Aston site. They introduced new lines, including ketchup and baked beans, made shrewd acquisitions such as Lea & Perrins, and renamed themselves HP Foods.

The trouble started when they were acquired in August, 1967 by, of all companies, Imperial Tobacco, as part of its expansion into foods. Imperial had the knowhow and resources to streamline HP Foods' production costs in a competitive market. This kept the brand healthy, but now HP sauce was just one product in a company which was selling, among other things, Lambert & Butler cigarettes, Courage beers, Ross frozen foods and Golden Wonder crisps.

In 1986, Imperial Foods was acquired by the US-UK corporation Hanson: the parent company interests were now as diverse as Allders department stores, Smith Corona typewriters and Ever Ready batteries. Two years later, HP Foods was French-owned, having been sold to the food company BSN (later Danone). Sister brands were now Evian mineral water and Kronenbourg beer. The irony was not lost on the media:

It is hard to know which country's culinary identity has suffered the greater insult.
- The Guardian, 7 July, 1988.

In 2005, it became American, acquired by Heinz, and a year later the production shifted to Elst, The Netherlands: Holland Produced Sauce.

The Aston factory, like so many around it, has now closed; its distinctive sign, to some the gateway to Birmingham, lies in the city museum.

So it is British no more, though it was so identifiably British: the people owned the brand - the Midland Vinegar Company were merely its stewards.

I pledge her in non-alcoholic wine
And give the HP Sauce another shake.
- John Betjeman, from Collected Poems (1958).

1Bruno famously appeared in TV commercials for many years, some of them alongside commentator Harry Carpenter. One of his catchphrases was 'Everything's OK with HP'.2He also reported that Saddam Hussein was partial to Quality Street chocolates.