The Legend of the Lorelei Content from the guide to life, the universe and everything 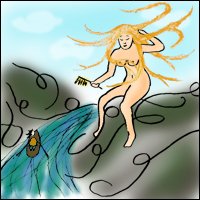 I cannot divine what it meaneth,
This haunting nameless pain:
A tale of the bygone ages
Keeps brooding through my brain.
- translation: Mark Twain, 1880.

So starts the well-known poem which, sung to Friedrich Silcher's tune, helped turn the Lorelei, or Loreley, into a folklore legend, famous the world over.

The Loreley is a 132m-high steep slate rock on the east bank of the river Rhine, near Sankt Goarshausen1 in Rheinland-Pfalz, Germany.

The most commonly-accepted derivations of 'Lore' or 'Lure' are 'treacherous' or 'deceitful', as well as 'fairies'; but as with most old names, nothing is certain and other explanations exist. The name 'Lurley' or 'Loreley' for this rock dates from the 9th Century. The Old High German2 name Lurlaberch or 'Mons Lurlaberch' (Mount Lurlaberch) was mentioned by a monk Ruodolf in about the middle of the 9th Century in the Annales Fuldenses3. In the 13th Century, people believed that the Nibelungen treasure was hidden in holes beneath the many vortices in the Rhine at the foot of the Loreley. This is mentioned by the Minnesänger4 Conrad Marner in a phrase or poem:

Whatever the origin and meaning of Lore may be, Ley or Lei most certainly means rock or slate.

Birth of a Saga

When Clemens von Brentano, inspired by a recent journey on the Rhine, wrote his ballad of the Lore Lay in 1801, little did he know that it would become the basis of a popular myth. His Lore Lay was a sorceress of outstanding beauty, and any man who looked into her eyes irreversibly fell in love with her. The bishop summoned her to be judged, but couldn't resist her beauty. She asked him to put an end to her life6, yet the bishop refused to condemn her. Giving her three knights as an escort, he sent her to an abbey to become a nun. On their way the party passed the steep rock and the girl asked the knights to let her climb up for one last view of her lover's castle and the Rhine. Once at the top she spied an approaching ship, and, exclaiming that her lover must be aboard, hurled herself to her death.

In Brentano's Rheinmärchen7, she is a fairy of eternal youth and beauty, with her palace on the rock at the Rhine.

Other authors took on the figure, including Joseph von Eichendorff in his 1815 poem 'Waldgespräch', where she is a witch, and OH von Loeben in the tale 'Loreley, eine Sage vom Rhein'8. Myth soon had her as a mermaid, sitting on the rock and luring sailors to their death, but it wasn't until Heinrich Heine's 1823 poem 'Lorelei', about a virgin combing her golden hair with a golden comb, while singing a song with a haunting melody, and Friedrich Silcher's setting of it to music a year later, that the legend really took off. Very popular throughout the 19th and early 20th Centuries, it is said that the Nazis didn't burn or ban it9 because of its popularity, merely labelling the author as 'anon', however, there is no written evidence of this.

The Rhine bends at the Loreley, narrowing to just 113m, and being at its greatest depth10. To make things even more treacherous, the river flows very rapidly at this point, and the Hungersteine (Hunger Stones) or Sieben Jungfrauen (Seven Virgins) rocks lie just beneath the surface, leading many a sailor to an early death. The narrow navigation was for centuries a great risk for ships and mariners, and it wasn't until the late 19th/early 20th Century that it was improved. Some rocks were blasted, the channel was marked with buoys, and a warning system was established. Yet, it is not without its perils today; on 28 September, 2003, the Rhine Cruiser Loreley (oh, the irony of this!) with 349 passengers collided with the cliff, damaging its propellers, and injuring around 40 passengers, three of them severely. No longer manoeuvrable, the ship ran aground on the opposite side.

At the southern slope of the rock a sevenfold echo could once be heard, but nowadays this is drowned out by the noise of traffic. This phenomenon added to the myth of the Loreley; sometimes it was interpreted as singing, sometimes as scornful laughter.

The Loreley is situated within the romantic Upper Middle Rhine Valley, a section of the Rhine characterised by castle ruins and vineyards, which has for over a century attracted artists and writers, including William Turner, Mark Twain and Mary Shelley. It has lost none of its beauty; thousands of tourists come to visit every year. In 2002, the stretch between Rüdesheim/Bingen and Koblenz was declared a Unesco World Heritage Site.

The Loreley itself has a visitor's platform on top and an open-air theatre a few hundred metres away. The latter was built by the Nazis in the 1930s as a 'Germanic Thing'11. It now features rock concerts and other large musical events. The nearby visitor centre opened on 26 May, 2000, financed by and built as a part of the Expo 2000 fair. It is situated within a landscaped park. In the 'Myth Room', a 3D presentation takes the visitor into the Loreley valley, following the traces of the first Rhine tourists of the 19th Century.

Every two years, a 'Miss' Loreley is elected by the Tourist Board Burgenstraße, to represent the greater Loreley area at events throughout Germany.

My mum used to sing it to us when we were children. Somehow, the text and melody stuck all these years. There's a mock version she sang for us, which also stuck.

I went on a school trip to the Rhinleand when I was a kid and we went on a boat past the rock. I can still remember the song they played today.

Funny with that song. I must have learned it in German lessons, because I knew it by heart.

What a coincidence, I went there just a couple of months ago! They have a little winery in St Goarshausen where they have very good wine.

Heine's 'Lorelei' is my German language party-piece. Though I've worked for Austrian and then German firms for nearly ten years, my conversation in German is still halting - except that I can now quote this entire poem, with what has been (slightly insultingly) described as 'the pronunciation of a much better German-speaker'. It's quite fun when you play up the melodrama and really proclaim it. I think the next project will have to be learning the tune and singing it a little bit too loudly.

The story of the Lorelei has inspired many artists, and the name has become popular in literature, film and music. Not only was Heine's poem translated into various languages, Brentano's ballad was translated into French by Guillaume Apollinaire12. Here is an assorted list of some notable occurrences of the name:

1Pronounced 'zunkt go-ahhs howzen'. Don't confuse with St Goar, which is on the opposite side of the river.2Spoken between about 750 and 1050. There was no consistent/standardised language or spelling at the time.3Documents of the Fulda Abbey.4A German lyric poet and singer of the 12th - 14th Centuries, who performed songs of courtly love.5 A rough translation:
Wine grows for them in towns high and low,
The bottom of the Rhine serves them, too,
The Nibelungen treasure lies in the Lurlenberg. 6She was tired of the lethal effect she had on men, and heart-broken because the man she loved had deceived her.7Rhine Fairy Tales, 1811, published in Märchen, 2 volumes, 1847.8Loreley, a saga from the Rhine, written in 1821.9Heine being Jewish.1017m to 25m, depending on the season and on which source you read.11'Thing' in the sense of a Norse place of assembly.12Guillaume Apollinaire, 1880 - 1918, French poet, writer and art critic.