Sir John Betjeman, Poet Laureate Content from the guide to life, the universe and everything 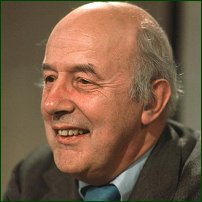 The English are given to a kind of collective introspection. We suppose that we share memories of halcyon days, and we revere the voice that makes them real.

They were cabinet-makers, the Betjemanns, and generations of them plied their trade in London, first in Islington and later in Highgate. John was born in 1906, an only child. The double-n was discreetly docked during the War Years, in a time when it was unseemly to be German. He was a disconsolate and timid child, and lonely watching caused the story-telling to well up in him. A doting family of reasonable means saw their boy off to the Dragon School (his primary), and then soon to Marlborough College (his secondary education.)

At Magdalen College, Oxford, his tutor was a not-yet-famous CS Lewis, who deemed the young man an idle prig. Betjeman did not particularly care for either Lewis or the faculty, immersing himself instead in ecclesiastical architecture and the Isis, which he soon edited.

The recalcitrant scholar was conspicuous enough to make an impression; his constant companion a threadbare teddy bear called Archibald Ormsby-Gore. Evelyn Waugh, (who was Betjeman's contemporary at Magdalen), borrowed this trait for the character of Sebastian Flyte in Brideshead Revisited, renaming the bear Aloysius.

Miss J Hunter Dunn, Miss J Hunter Dunn
Furnish'd and burnish'd by Aldershot sun
What strenuous singles we played after tea
We in the tournament – you against me!
- 'The Subaltern's Love Song', 1945

Tennis, of course, is an achingly sexual pursuit.

The object of Betjeman's definitive sporting fantasy, Joan Hunter Dunn, really lived. He met her during his time at the Ministry of Information during the second world war, and the warm-handled racket would never again quite fit its press.

Sublimated eroticism in the guise of sport is a frequent theme of Betjeman's poetry. His women are variously stern governesses or lithe Amazons. All of them are alluring, from their retroussé noses to their bicycle saddles.

He liked to pretend that he failed his degree. In fact, he was merely rusticated for failing the Divinity paper, returned, and secured a Third. Oxford has ever provided grave distractions for the tentative hedonist.

After going down, Betjeman took up teaching in a succession of prep schools. For five years he languished, until pressed to join the staff of the Architectural Review. By 1930 he was assistant editor and finally resolved to make a living by the typewriter. Friends soon lauded his poems, and an Oxford peer, Edward James, promised to publish a first anthology. Called Mount Zion and pressed in 1931, it attracted modest acclaim.

John Betjeman fell in love very often, but seldom achieved sufficient proximity for reciprocation. Penelope Chetwode was to be the exception. They married, and the poet acquired a Field Marshal as a father-in-law. The young couple settled in Uffington, at a practical distance from her parents' reproach.

It's said that the IRA plotted the killing of John Betjeman. It was back in the 1940s during a sojourn as Press Officer at the Dublin Consulate, and in a time when such intentions were still moderately selective. The story goes that they read his poetry, and rescinded the plan.

It seems improbable. What, after all, could be likelier to inflame Fenian retribution than those very English musings, quaint and unquenchable?

Come friendly bombs and fall on Slough!
It isn't fit for humans now
There isn't grass to graze a cow
Swarm over, Death!
- Slough, 1937

His love of architecture pervaded his early writing. Ghastly Good Taste was published in 1934. In those early years, his journalistic range was as prodigious as his output. He was commissioned by a petrol company to write a series of guides to the English counties. He became the Evening Standard's film critic. At last, his poetry came to the fore, and a collection called Continual Dew of 1937 included his most notorious piece, unrivalled through near-fifty years yet to come.

The horrible reality of the bombing of cities was still unknown in England. The most famous opening line in 20th Century English poetry was probably inculcated by newspaper reports of the trauma of Blitzkrieg in Spain. It was the pitiless pettiness of small-town capitalism that Betjeman truly despised; the abomination of Slough epitomised it, and drew the full vitriol of this otherwise mild-mannered man.

His only child, Candida, was born in Ireland in 1942, but the following year saw Betjeman back in England. His patriotism suppressed his poetry in the war years, but the full expression of his longing to write waited on another event, his estrangement from Penelope, who by 1948 had become unreasonably Catholic.

Betjeman would never remarry, though he did find a lifelong friend and companion in Lady Elizabeth Cavendish. John Piper became another close friend. Partly through the overtures of Shell-Mex and partly through his fascination with railways came work on Swindon, Shropshire, and most famously the towns to the north-west of London that are served by the Metropolitan Railway, or Metro-Land, as Betjeman would make it known.

By the beginning of the 1960s, John Betjeman was famous. His Collected Poems and verse-autobiography Summoned by Bells were acclaimed best-sellers, and his frequent appearances on the BBC (often championing architectural heritage causes) kept him firmly in the public eye. A knighthood in 1969 presaged his elevation to Poet Laureate, which took place following the death of Cecil Day-Lewis in 1972.

Betjeman was a shoe-in for the Laureateship. The accessibility of both his poetry and his broadcast persona cemented his popularity. In spite of all this, loneliness never quite left his life and his self-esteem always fell short of the level that his public image merited. This improbable trait in a man who commanded the English language with complete alacrity was summed up in the script of a BBC tribute in his centenary year:

Depression was for him what daffodils were for Wordsworth1.

Towards the end of his life, Betjeman was afflicted by Parkinson's Disease. Writing and broadcasting continued nonetheless, almost until the time of his passing in May, 1984. He lies in the churchyard of St Enodoc, a mile from his last home at Trebetherick in Cornwall. The resting-place completes one of the circles of Betjeman's life, since it was a venue for childhood holidays, and a rare island of happiness in those formative years.

A Woman Who Never Was

Anecdotes concerning Betjeman include a famous hoax. Nobody has ever admitted responsibility. We now know, however, that Bevis Hillier, Betjeman's first biographer, perpetrated it.

Incongruously for the time, Betjeman had declared in a 1984 television interview that his main regret in life was 'not having more sex'. Less than a year later, John Betjeman was dead. Stories of illicit liaisons would henceforth command particular journalistic attention.

On cue, a love-letter came into circulation. No-one took much trouble to test its veracity. It was too precious a scoop to pass up. Serendipitously, AN Wilson was working on a new biography of the poet. A full transcript of the letter was eagerly incorporated. Sunday newspapers published it with relish.

Hillier did not like Wilson very much. It was not clear at first that the letter was a fake. The clinching evidence, however, was a message hidden in the disputed note, revealed by spelling out the initial letters of each sentence.

The English love him still. Even the slightest recollection of his poetry marks him as a champion of the national spirit. He is full of the contradictions of the race he epitomises, ardour mixed with repression, dignity with self-consciousness, wit with wistfulness.

Milton, Blake, Byron, Wordsworth: so many greater poets, but all of them lesser gentlemen. And their Albion is nowadays distant, while Betjeman's is around us still, soft in today's sunlight, drowsy with the scent of the moment and replete with the freshest yearnings of each among us all.