The Age of the Plastic Stirrer Content from the guide to life, the universe and everything 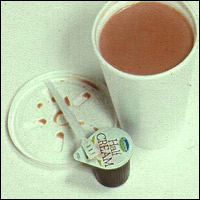 I have measured out my life with coffee spoons.
– TS Eliot: 'The Love Song of J Alfred Prufrock'.

Since 1985, volunteers in California have turned up in their droves for the annual Coastal Cleanup Day. Not only have they left the beaches pristine, they have amazingly logged every single item of litter that's been bagged. It may not be surprising to hear that up to 2007, the most popular item was the cigarette, with over four million collected. This Entry, however, is about the item which featured 6th in the league table, with a total of 455,796 plucked from the sand. Welcome to the world of the plastic stirrer1.

It never used to be like this. Those born in more recent years may not be aware of a hard shiny substance known as stainless steel, which we used to fashion into all sorts of useful shapes. One of these was a kind of deep concave oval with a long straight handle attached to one end. It was known as a 'spoon', and was quite a useful tool. Two of them, in the wrong hands, made a handy percussion instrument. Other amateur entertainers could balance them on their noses. Its real forte, however, was in the dining area: as well as using it to measure out items like sugar, people would employ it to transfer all manner of foodstuffs from the plate to the mouth. It was also a pretty neat agitation device; tinkling it around in a hot drink for a few moments could quickly accelerate the dissolution and mixing of sugar and milk into it.

Sadly, its days were numbered. As the world's economy grew, people found themselves with enough disposable income to enjoy the luxuries of eating and drinking out — cafés and fast food restaurants flourished. Not surprisingly, these became ever more competitive and cost-conscious, and the casualties were the china crockery and the stainless steel cutlery. Plastic spoons were cheaper to produce, and didn't require washing up. They were also less likely to be stolen. Then, as sugar bowls were replaced with sachets, the spoons evolved Darwinian-like into simple stick-shaped stirrers.

It's big business, though. In 2007, the OCS (Office Coffee Services) sector was worth $12 billion in the 'break room supplies' category2 alone. How many stirrers did you use today? How many people are there just like you? Is it any wonder that something approaching half a million of them get washed up on Californian beaches over a period of 20 years?

It's Not Easy Being Green

You don't need to be a mathematician to realise that we are manufacturing billions of these plastic stirrers. We use them only once — in fact we are often given one when we don't even need it — then we bin them, or lob them into the sea, or whatever. We know it's not right, but who's to blame? Not the manufacturers, surely? Butter wouldn't melt in their mouths as they tell us how they are simply responding to consumer demand, and how they would see a new environmentally responsible corporate customer image as nothing more than an opportunity to leverage some new paradigm or other. We are socially and corporately addicted to these sticks, and we need therapy, frankly.

Is Wood as Good?

Most plastic sticks end up as landfill  — it's big, but it's not clever. They're neither compostable nor recyclable. The alternative is wood, and the recent trend is to use those slimline lolly-stick stirrers. If you can get over the woody taste they add to your brew, then these are undoubtedly more landfill-friendly (but better still if you take them home and compost them in the garden). Just don't worry about the loss of Chinese birch forests or the carbon emitted by the intensive industrial process which reconstitutes them into splinter-free wands, then delivers them to your local Starbucks.

Still feeling guilty? Take your own spoon and reuse it.

Reuse is better than recycling, so they say, but be thankful you weren't the first to consider any of the following bright ideas:

In 2003, Irish teacher Louise Lowe was carrying her breakfast tray from the counter at McDonald's, Dublin Airport when she noticed the tea was resting on a plastic stirrer. Disaster struck when it then toppled over, scalding her stomach — an injury which required medical treatment. When suing for damages, however, the judge ruled that the bulk of the negligence lay with Ms Lowe, reducing her award by 75% (over €11,000) — one expensive stirrer!

1The figure 455,796 is for the category 'straws/stirrers', so only a proportion will be stirrers. Still, it's a pretty big number.2This includes paper and plastic cups, plates, cutlery, straws, lids and stirrers.