Sugar Sachets Content from the guide to life, the universe and everything 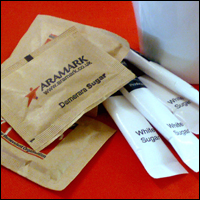 In days of yore, a good cup of tea was brewed from the finest Ceylon (Sri Lankan) leaves in a ceramic pot. It was served up with the best china cups and saucers, a small jug of fresh-from-the-udder milk and some delightful cubes of white sugar, which you delicately placed in your tea with a pair of silver serving tongs.

Now, when dining out, tea often comes in a stainless steel teapot in which a forlorn-looking teabag floats dejectedly, with a styrofoam cup (or, if you're extra lucky, an actual real teacup and saucer), a jigger of UHT milk and a small plastic stick to stir it all.

And if you’re the sort who requires a little extra something sweet in their tea, the elegant sugar cube is today perhaps something of a rarity (unless you're a horse). Your sweetener1 is now provided in a small paper sachet that’s about the size and shape of either a badly rolled French cigarette or a large postage stamp.

A Spoonful of Sugar

The first ever small packets of sugar can be traced to Partridge's Dining Rooms of North 8th Street, Philadelphia, US. The owner, Mr Partridge, produced the small packets from 1862 onwards. But it wasn't until New Yorker Benjamin Eisenstadt had them mass produced in 1945 that they came into popular use.

Eisenstadt and his wife, Betty, ran a diner called the Cumberland Cafeteria in Brooklyn and wanted a way to serve up single teaspoon-sized portions of sugar. His invention was stolen by a firm he approached, due to him not patenting the idea, but Eisenstadt subsequently became successful in the 1950s by producing sachets of the low-calorie sweetener Sweet'N Low instead.

The popularity of sugar sachets is quite a phenomenon. They can be found in anything from the greasiest of roadside diners to the poshest of hotels the world over. They enable customers to add a single portion of sugar or sweetener to their meals without the worry of spilling it everywhere - as is the norm when using a bowl and spoon, although there’s contention over how much a 'single portion' is.

It’s thought that a sugar sachet should hold a teaspoon of sugar2. So, in metric measures that equates to about 4g - or 5g, or 3g, or possibly 6g. For those who have a sweet tooth, it's recommended you multiply the number of sugar sachets needed to sweeten your drink by three - due to the uncertainty of the sugar content in the average sugar sachet.

Variety is the Spice?

The sugar sachet has gone on to become more than just table dressing, with an amazing array of uses that you wouldn’t perhaps think of at first. Here are just a few:

There are some downsides, however. Being made of paper, if they get wet they’re next to useless and the contents crystallise. And of course if the sachets aren't complementary they’re prime candidates for the shopping bargain known as a 'five-finger discount'3. One h2g2 Researcher can confirm:

Ah, I well remember my student days when purchasing a cup of tea at a local café, or in the refectory, would involve helping yourself to at least a dozen sugar sachets. We never needed to buy a bag of Silver Spoon4 for our kitchen!

The sugar sachet has unfortunately found itself mixed up in all sorts of nefarious activities, many of which have hit the international news headlines. Incredibly, Qantas, the Australian airline, sacked one of its airline stewards after finding they’d been stealing sachets. And while there’s some comfort in the knowledge that in the UK you’re legally entitled to take unused sachets from your hotel room, the following are just a few examples of misguided uses of the humble sugar sachet:

Regardless of these, the sugar sachet continues to appeal, so much so that it’s gained what some may consider a 'cult following' in contemporary society.

Because of the diverse appearance of sugar sachets, with various pictures, shapes and sizes available, they’ve actually become collectable like stamps or coins. And 'sucrology' is now an identified hobby. In the UK alone, there are 250 recognised and 'official' sucrologists.

However, a sketch in the Times newspaper reported that sucrologists may be 'responsible for 2 per cent of the world's gross national product being tied up in emergency reserves of sugar and salt sachets. If such supplies were convertible to cash, the world would be rich enough to provide clean water to everyone in Africa, or possibly even to pay for Al Gore's domestic-energy bills for a year’.

One Lump or Two?

1Be it white sugar, raw sugar, or artificial.2As that's how much helps the medicine to go down - don't you know.3Euphemism for shop-lifting.4Brand of sugar.