'I Am Sam' - The Film Content from the guide to life, the universe and everything 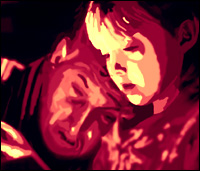 I Am Sam is a touching film about a mentally disabled father's fight to keep his child. Released in late 2001 and directed by Jessie Nelson, it stars Sean Penn1, Michelle Pfeiffer and Dakota Fanning.

Sam Dawson (Sean Penn) lives alone in an apartment and has a job in the local Starbucks. He has a mental age of a seven-year-old and has also been diagnosed as having autistic tendencies. As the film progresses, it becomes clear that Sam was loved and looked after by his mother who has since died. It is also revealed that Sam manages to get a homeless woman pregnant. Shortly after the film begins, the audience sees Sam excitedly attend the birth, holding and naming his daughter straight after she is born. Unfortunately, the new mother is not so excited, and runs away leaving Sam alone with his daughter. He named her Lucy Diamond Dawson, after the Beatles song Lucy in the Sky with Diamonds.

Lucy begins life being looked after just by Sam, sleeping in a carefully-made hammock and attending work with her father. Of course, Sam has a lot of trouble looking after a baby, but fortunately his neighbour Annie (Dianne Wiest) is able to help. Sam is wonderful at playing with his daughter and he loves her immensely. The two of them share a close relationship and have special routines – such as going to a certain restaurant on a certain day. Sam always eats the same food. Lucy, however, wants to be more adventurous, and occasionally go to a different restaurant. This is something Sam is unable to deal with.

Lucy2 and Sam play together at the park, listen to Beatles music together and read Sam's favourite book, the Dr Seuss classic Green Eggs and Ham (this book features a character named Sam, who runs around saying 'Sam-I-Am'). Lucy is a clever and pleasant child and when she starts school she seems to make friends easily. Sadly, the other children are somewhat put off by her father. Over a game of draughts, one boy asks Lucy 'What's wrong with your father? Why is he acting like a retard?' to which Lucy replied 'He is.' Although Lucy understands her father is 'not like other Daddies', she does not mind as 'nobody else's Daddy comes to the park'.

Sam has a group of friends – one of whom is paranoid, another has Down's syndrome. They all get on really well together and have special routines, such as 'movie night', and Lucy is good friends with all of them.

Unfortunately, Lucy's schoolteachers are worried about her progress. They think she may be holding herself back so as not to surpass her father intellectually. A moving scene in the film shows Lucy and Sam reading one of Lucy's schoolbooks, Stellaluna. Although Sam would much rather be reading Green Eggs and Ham, he struggles through Stellaluna, stumbling over words like 'different'. Lucy can read the words, yet pretends she cannot, so as to not hurt her father's feelings. Lucy's schoolteachers call in Sam for a meeting, and express their concerns to him regarding Lucy's development. As Sam is generally described as having the mental age of a seven-year-old, the teachers are worried about what will happen when Lucy turns seven – or even eight.

After Sam has a disastrous incident with a prostitute, social workers decide that it would be in the best interests of the child to be placed into care, and remove her from Sam's house on her birthday. Sam does not understand what is going on, and continually asks 'Why isn't Lucy going home with me?' Lucy, meanwhile, is kept in a special state 'home'.

Sam and his friends decide that it would be beneficial to have legal representation to help him fight the state and receive custody of Lucy. Enter Rita Harrison (Michelle Pfeiffer), who is an uptight, busy lady and a pretty ruthless lawyer. Rita is, of course, not going to take the case, until she realises the reputation she has around her colleagues is that of a mean woman who never does pro bono (free) cases. To save face with them, she takes on Sam's case. Sam is delighted with Rita's name, because of 'Lovely Rita Meter Maid' and George Harrison. Lucy is also busy trying to figure out the system and ways around it in her own time. She likes to spend the two hours of supervised visits that she gets with Sam concocting plans to go home with him.

Unfortunately, things don't look very good for Sam's case as Rita can't provide decent witnesses. Sam doesn't seem to help matters; he is confused by a lot of what is going on. Meanwhile, Lucy is moved out of the 'home' and placed into foster care. She is terrified that she will get a foster mummy who will hit her, as happened to another child she met, but she ends up with two loving foster parents, who adore her and would like to adopt her properly. The court battle will end up deciding what happens to Lucy.

The director, producers and stars of I Am Sam spent some time in LA Goal, a place for people with 'mental disabilities'. All found they were particularly inspired by their stay there. Two people from LA Goal were chosen to play some of Sam's friends in the movies, and other characters from the film were based upon people from LA Goal who could not appear in the movie.

Music in The Film

The film features many songs by the Beatles. The director and producers found that at LA Goal, most of the people chose the Beatles as their favourite band. It was decided that Sam also would love the Beatles – the audience is shown Beatles posters around his apartment, and there are Beatles references throughout the film. There is also a tribute to the Beatles in the form of a scene featuring Lucy, Sam and friends walking across a zebra crossing, as the Beatles do on the front cover of the Abbey Road album. Unfortunately, it turned out that using real Beatles recordings throughout the film would cost about as much in copyright fees as the whole rest of the film had cost to make! In a compromise, various cover versions of Beatles songs were recorded, including 'Two of Us' and of course 'Lucy in the Sky with Diamonds.' Some of these songs, such as 'Two of Us,' were deliberately recorded with both male and female voices, to mirror Sam and Lucy.

After its release, the film received some major award nominations, as well as both positive and negative reviews. The DVD was released with a lot of extra features, including a long documentary about how the film was made and where a lot of the ideas came from. It is an excellent film to watch if you enjoy films featuring law courts or family relations.

1Who was nominated for a Best Actor Academy Award for his performance.2Throughout most of the film, Lucy as a young girl is played by Dakota Fanning. However, in the early stages of the film when we see Lucy growing up, the character is played briefly by various other young girls, including Dakota's little sister Elle Fanning.