Pinky and Perky Content from the guide to life, the universe and everything 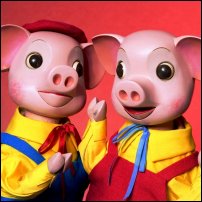 Once upon a time, long before Spider Pig, Babe, Miss Piggy or indeed Piiiiigs iiiin Spaaaace, there were Pinky and Perky. These twin boys were true showbiz pigs and entertained the UK and beyond from 1957 until 1973. Let's take a look at some highlights from the career of this trailblazing pair.

All right, first off for those too young to remember them, they were puppets. Yes, puppets of the variety that had visible strings and moved as if… well, as if they were puppets on strings. They were the creation of Czechoslovakian husband and wife team Jan and Vlasta Dalibor. Their puppets were pigs only because pigs were a symbol of good luck in Czechoslovakia. Though Pinky and Perky were identical twins, they were easy enough to tell apart - even to the untrained eye; Pinky wore red and Perky wore blue, with a hat to accessorise. The hat also helped those viewing in black and white to spot the difference.

The BBC was prepared to host the piggies in 1957, and they were then strictly for the children's market. Music was key to the shows and each week the little pigs would sing and dance along with a popular music hit as well as interact with several other puppet creations.

As their popularity soared, the format of the show changed and the little porkers were left in control of their own television station, PPC TV. Here they worked with a human guest every week, and the likes of Michael Aspel, Freddie and The Dreamers and sporting icon Henry Cooper were all more than happy to share their stage. The pigs were also permitted to wander out into the world where comedic adventure lay. They had a house comedian, Horace Hare, who bore more than a passing resemblance to popular comedic genius of the time, Ken Dodd, and a Vera Vixen smouldered with her songs covering the Shirley Bassey or Eartha Kitt genre.

By the mid-1960s they were trotting out covers of pop hits and had released a number of singles and albums. Some of their best known hits include Bridget the Midget, Rosetta and that all-time classic, Yellow Submarine. This brings us nicely on to the house band, The Beakles - a four piece band of puppet crows which sported mop-tops evocative of The Beatles - and they had a huge following as the station's Fab Four.

Just for the record, it's easy to tell a Pinky and Perky hit from the original because the pigs sang as they spoke, with little piggy voices. Imagine if you will, that they were piglets permanently on helium and that will give you some indication of their unique sound. It was created by recording baritone voices slowly then speeding up the soundtrack, but, strange as this may seem, it made them all the more entertaining and appealing.

With all this hindsight they were a lot like a forerunner to The Muppet Show, and soon, like the Muppets, gathered a family audience.

The pigs were so popular that they made the gigantic leap that is the Atlantic and created a whole new fan base in the United States. They made a half dozen appearances on national television on the Ed Sullivan Show, and at their peak had more viewers than American darling Lucille Ball in I Love Lucy. They also hogged the limelight for an amazing year at Las Vegas - not bad for two Czechoslovakian pigs.

Their popularity was such on both sides of the pond that at their peak they were watched by around 15 million viewers and received almost as much fan mail as the Beatles - no mean feat, indeed.

In 1966 things went a bit pear-shaped for Pinky and Perky. The BBC banned their show. Yes, such was the controversy caused by two little pigs that their show had to be chopped from the schedule. Well, it was all a storm in a tea cup really; apparently an up-coming show was 'too political' for the BBC's neutral policy, so You Too Can Be A Prime Minister was shelved… temporarily.

The great British public were outraged, and were quick to let the BBC know, so the episode was shown following the General Election. Interestingly, the show had greater ratings than the party political broadcast made by the new Prime Minister Harold Wilson on the other channel. Now that's entertainment!

In 1969 the popular format made the switch to Independent Television and the good times continued to roll until 1973. By then television tastes were moving on and the two retired - and that's not an euphemism - to enjoy their hard-earned pensions.

In their 15-year reign as light entertainment giants they made over 220 half-hour shows, appeared in 11 Royal Variety Shows alongside such icons as The Beatles and Marlene Dietrich, and sold millions of records. All of which allowed their creators to retire with them to a luxury home in the countryside.

Some 20 years after their retirement they were lured back to the small screen by none other than Billy the Pig for a slot on his show The Pig Attraction. This led to the release of some of their songs on an album, but it didn't cause the hoped for revival of their fortunes, and barely scratched the charts.

The rights to the characters were sold in 2001 for a cool £500,000 - but again, the attempt to relaunch their careers failed spectacularly - more spam than ham really.

Now, however, their first home - the BBC - has offered a lifeline. They've been given a makeover and are now 21st-Century computer-generated images. The new, improved Pinky and Perky were seen for the first time on CBBC in November, 2008. They present a live show complete with gunge and games to amuse the under 11s. With persistence and support, the little piggies may once again bring home the bacon.