How to Extract Your Own DNA Content from the guide to life, the universe and everything 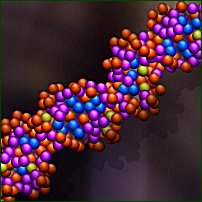 DNA, or Deoxyribonucleic Acid, is the genetic material of nearly all living organisms on the planet Earth and, as such, can be called the basic building block of life (although Lego probably comes a close second). In 1953, James Watson and Francis Crick unveiled their discoveries about DNA and the double helix model, which formed the basis of genetic coding.

DNA is located in the cell nucleus as the basic structure of the genes, and is composed of two strands of nucleic acid made up of units called nucleotides, wound around each other to form a double helix shape.

Nucleic acids, called that because they were discovered in cell nuclei, are long organic polymers that contain carbon, hydrogen, oxygen, nitrogen and phosphorus, forming the inherited genetic material inside each cell. In humans, each gene is a segment of DNA and controls protein synthesis, regulating most of the activities that take place in the cells.

The DNA molecule can make exact copies of itself by the process of replication, thereby passing on hereditary information - so determining all physical (and some would argue, personality) traits. This enables DNA to be used to identify gender, hair and eye colour, and other genetic markers such as common ancestry or whether you have a predisposition for hairy armpits.

With a few simple bits and pieces found about the home, you can extract and have a look at DNA1. The method explained below is a home-science experiment that has its basis in the 'Marmur' preparation used by biotechnology laboratories the world over. So you can do it at home safely without fear of breaking any United Nations Conventions or blowing up the kitchen.

As said, there is no real risk attached to extracting DNA at home, so that when someone asks (usually a small, inquisitive child), 'What's DNA?', not only can you point them in the direction of a suitable book, magazine or website, you can actually show them the stuff itself - proving it does exist!

You can extract DNA from fruit and vegetables like peas, broccoli, onions and even kiwi fruit (in fact any living organism, although next door's cat or dog isn't recommended) - but human DNA extraction is probably the most fun, and the grossest.

The world of television is especially keen on the concept of DNA fingerprinting; many modern crime dramas have the main protagonists swabbing the inside of suspects' cheeks with small sterile cotton balls on the ends of especially long cocktail sticks to extract cells. The resulting cellular information obtained to aid in DNA profiling usually leads to the villain being accused of a crime, finding out they're related to someone obscure, or that they're actually not what they seem (for example: while they look like a man, they're actually a woman, or an alien).

Away from the television, though, the harmless procedure of obtaining a DNA sample can be done without fear of laboratory test results proving you're the milkman's heir. To extract DNA at home you will need the following:

You can, if you wish, try taking the string of DNA out to investigate further. To do this a thin, long tool like a kebab skewer or firm plastic straw will do the job. Simply stick the utensil in the mess and twist it slowly, the DNA strands will wrap around it. You must do this very carefully as the DNA is extremely fragile.

Once you have DNA strands out you can poke them, prod them or stick them under a microscope. You could try staining the DNA to make it easier to look at under the microscope, or you could even test its acidity with some natural pH indicators like beetroot and red cabbage. Whatever you do though, make sure you dispose of the results properly. Don't drink the concoction, or sell it off to a strange-looking chap in a dirty white labcoat who mentioned something about cloning...

1No, not this one.2If you're under the legal drinking age, ask permission to obtain said alcohol for this experiment.3If using more complex tissues like onions or other plants instead of human spit, it is worthwhile filtering the solution through something like coffee filter paper to remove large cell fragments.4A further refinement to this part of the process is to also treat the solution with a proteolytic enzyme, which will aid in the separation.5Oh, and probably a bit of RNA (Ribonucleic Acid) too.