Borage (Starflower) Content from the guide to life, the universe and everything 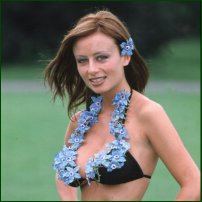 In olden times Borage (Borago officinalis), also known as 'starflower', was a garden herb, but it is now considered to be a wild flower. It is still, however, often found near habitations.

Borage has five-petalled star-like flowers which are usually of an intense blue colour, but can be pink, and which are highly attractive to bees. Indeed, the flowers are very rich in nectar and beekeepers often grow the plant because of this. The startling blue colour of the petals is believed to have been the inspiration for the colour of the Madonna's robes in many Renaissance paintings, in which the expensive pigment ultramarine was used1.

The origin of the name is unclear, but the Celts referred to it as borrach, meaning 'courage'. Others, however, believe that its name is derived from the French word borrache, which means 'hairy' or 'rough', and which could be a reference to its bristly stems and leaves. The Greeks and Romans believed that the herb was a source of courage and comfort, and there are references to the flowers being embroidered into medieval tapestries and the colours of jousting knights. The blooms were even floated in drinks consumed by Crusaders before battle. The American settlers carried borage seed with them on their long journeys across the Atlantic Ocean.

Aesthetically, borage is particularly attractive when planted in drifts with ox-eye daisies, cornflowers and poppies.

Borage is a hardy annual and, because it is essentially a wild flower, it is very easy to cultivate from seed. Once established, it will spread its seeds liberally and pop up year after year. It blooms throughout the summer. It prefers light, free-draining soil and, if grown in pots, it needs plenty of grit and sand. In the garden, borage is a useful companion plant to strawberries, as they are believed to stimulate each other's growth. As a companion plant to tomatoes, it is believed that borage deters tomato worm, and is thus a natural form of pest control.

On the negative side, borage is highly attractive to blackfly. However, this can be turned to advantage by planting it as a decoy close to one's fruits and vegetables, to prevent them being blighted.

The specific designation 'officinalis' indicates borage's inclusion in official listings of medicinal plants and, historically, the plant had many medicinal uses.

Borage has long been associated with health and good cheer and, for this reason, Pliny called it Euphrosinum, due to its euphoric effect. Both Pliny and the ancient Greek physician, Dioscorides, believed that borage was the famous 'nepenthe'2 of Homer which, when steeped in wine, brought about forgetfulness.

In recent years, borage has been shown to contain gamma linoleic acid (GLA), an omega-6 polyunsaturated fatty acid, which is active against various cancers, including breast, brain and prostate. It prevents the spread of malignant tumours by restricting blood vessel growth. For these reasons, borage has been adopted as the symbol of National Cancer Day, as promoted by Cancer Research UK. In fact, borage has the most potent concentration of gamma linoleic acid found in nature, containing twice as much as is found in the evening primrose, and which is used to treat pre-menstrual syndrome (PMS). Indeed, it is now possible to buy capsules of borage seed oil from health food shops for this purpose.

In folk tradition, borage has long been believed to dispel melancholy and ease grief and sadness. According to Dioscorides, borage can 'cheer the heart and lift the depressed spirits', while Gerard3 wrote that its flowers were used in salads 'to exhilarate and make the minde glad' while cooks used them 'for the comfort of the heart, to drive away sorrow, and increase the joy of the minde'.

The flowers can be picked and make a fine addition to salads, as do their leaves which have a taste reminiscent of cucumber.

The leaves can be cooked and served up as a vegetable in much the same way as spinach, or in soup recipes. Go here for a number of recipes involving borage.

The leaves and flowers can be added to refreshing cold summer drinks such as Pimms or to non-alcoholic fruit punches. Borage tea can be made by taking a small bunch of leaves and simmering in boiling water. If mixed with honey, this can help if one is suffering from a cold.

A traditional and refreshing drink, seasonable in summer, this recipe comes courtesy of Mrs Beeton.

Place all the ingredients into a silver cup, regulating the quantity of ice by the state of the weather: if it's a very warm day, a larger quantity is required. Pass the cup around with a clean napkin passed through one of the handles, so that the edge of the cup may be wiped after each guest has partaken of the contents thereof.

1The colour blue has a Biblical meaning, symbolising heavenly grace. The Virgin Mary is often depicted wearing blue clothing, which associates her with the royal House of David, and this has given rise to the modern marriage tradition that the bride should wear 'something old, something new, something borrowed and something blue'. Wearing a blue ribbon, or some other bit of blue about her gown, denotes purity, fidelity and love.2Nepenthe appears in the fourth book of The Odyssey and, historically, consisted of a blend of wine and either hemp or opium. However, scholars are uncertain of its exact composition.3John Gerard (1545 - 1612) was one of the great English herbalists. He was a surgeon, and a well-travelled and dedicated gardener. He grew over 1,000 plants, mostly for seed. His Gerard's Herbal book was first published in 1597.4Maraschino is a clear, relatively dry liqueur made from Marasca cherries, and which has a subtle bitter almond flavour.