David and Goliath - Archaeological Evidence Content from the guide to life, the universe and everything 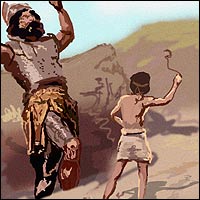 Most people will be familiar with the Old Testament story related in 1 Samuel, chapter 17, in which a shepherd boy, David, armed only with a slingshot, slays the giant, Goliath.

The background to this story is that Goliath of Gath, a hero of the Philistine army, standing some six cubits1 and a span in height (299cm; nearly ten feet), challenged the Israelite army to provide a man to fight him. Despite Goliath's vast size and the fact his armour consisted of a bronze helmet, bronze mail armour weighing 5000 shekels (or 80kg - compare this with 14th Century full-body plate armour which weighed a mere 36kg) and a shield, David was able to kill him with single stone directed at his forehead.

The David of this story was a shepherd and skilful minstrel and, indeed, by the time of this event he was a musician at the court of Saul, the first king of Israel. In his book The Bible as History, Hodder and Stoughton (1956), Werner Keller says:

For his poetry alone a modern David would have been a Nobel Prize winner. Yet like the mediaeval troubadours he was poet, composer and musician rolled into one.

Following this triumph, Saul took David on as commander of his troops.

David was the son of Jesse, a farmer of Bethlehem, and eventually became the first king to rule a united Israel in Palestine. According to the genealogies given in Matthew and Luke, David was an ancestor of Christ and so is of vast significance theologically. Christ was the son of Joseph the carpenter and Mary, and Joseph was a descendant of David. But theologically, Christ is considered to be the son of God himself, thus making Joseph Christ's foster father.

The question is, were David and Goliath real people, or is this story merely a myth written centuries after it was supposed to have occurred, as some scholars claim? Is there any evidence that this event could really have occurred?

Recent archaeological discoveries in Israel provide the faintest glimmers that this story could have some basis in fact.

Despite the accounts of David's life and exploits as recorded in the Bible, many scholars have doubted that King David actually existed.

However, in 1868 an inscribed basalt stone, dating from the 9th Century BC - known as the Moabite Stone2 or the Mesha Stela - was discovered at Dibon, Jordan; an ancient city east of the Dead Sea, by FA Klein, a German missionary. The stone was 1.1m high and 0.6m in breadth and in thickness, rounded at the top. It consisted of thirty-four lines, written in the ancient Hebrew alphabet, a script closely related to Phoenician, and was set up by Mesha3 at Dan as a record and memorial of his victories.

The stone was, unfortunately, much fragmented but in 1993 a French scholar, Andre Lemaire, who had spent seven years piecing it all together, discovered the words 'House of David'. Line 31 of the Moabite Stone contains the words '...the sheep of the land. And the house (of Da)vid dwelt in Horonen'. This was reported in Biblical Archaeology Review, May-June, 1994. and created such a sensation that it was also reported on the front page of The New York Times. This inscription showed that Israel and Judah were important kingdoms in the 9th Century BC, and refuted the positions of those scholars who claimed that these were never nations of any significance, and even disputed that David had ever been at the head of a united monarchy.

It is thought that the name 'Goliath' was an Israelite phonetic translation of the Philistinian name, Aylattes.

Goliath himself was a member of the Anakim4, a race of giant people who inhabited the Philistine cities in the neighbourhood of Hebron. The Anakim appear to have been an aggressive, warmongering people who terrified the Israelites.

The Philistines were a people who, from the 12th Century BC, occupied the coastal lowlands of Palestine; and who gave their name to that country. They were organised under five lords who ruled at the five chief Philistinian cities: Gaza, Ashdod, Askalon, Gath and Ekron. Gath, the home of Goliath, was situated on the frontiers of Judah and, nowadays is identified with Tell-es-Safi, where crusaders built the castle of Blanche Garde.

The Philistines are believed to have invaded Israel in the 11th Century BC. They were highly civilised, skilled in agriculture and commerce; and brought in their own culture and language. Apart from this, not much is known about their language and writing.

Furthermore, the Philistines were technologically advanced, and possessed iron weaponry5, this being much harder and more durable than bronze and copper, used by the more primitive Israelites.

Tell-es-Safi (known as Tel Tsafit in Hebrew) is a mound, some 100 acres in size, which occupies a commanding position on the border between the Judean foothills (known as the Shephelah) and the coastal plain, approximately halfway between Jerusalem and Ashkelon. It was continuously inhabited from the Chalcolithic6 period (4th millennium BC) until 1948 and, nowadays, is one of the largest and most important pre-Classical period archaeological sites in Israel.

In 2005, archaeologists from the Bar-Ilan University in Israel, while digging at Tell-es-Safi, uncovered a shard of pottery bearing the inscription ALWT and WLT, written in the archaic proto-Canaanite language dating back some 3,000 years to 950BC. This uses a different script from the Roman alphabet used in modern Western languages. The shard, measuring 6cm in length, is thought to come from a bowl of 15 to 20cm diameter. The dating puts it within 50 to 100 years of when standard Biblical chronology suggests that David met Goliath and also makes it the oldest Philistine inscription ever discovered. Professor Aren Maeir of the Bar-Ilan University says that the words ALWT and WLT are non-Semitic and are similar to the word 'Goliath'. Certainly, the inscription appears to be written in script which is closely related to Phoenecian. Phoenecian is written from right to left, and the A, W and T in the inscription are Phoenician, whereas the 'L' appears to be a sort of spiral like a G or a 6. (A Phoenician 'L' looks more like our Roman 'L', but with the two lines forming an acute angle. Hence, the entire script is not exactly Phoenician, but is closely related to it).

Although this finding at Tell-es-Safi does indicate that 'Goliath' was a name used in this area at that time; it would be extremely unlikely to have any connection with the person of the David and Goliath legend. It certainly does not prove that a ten-feet-tall giant actually existed. Note that other sources, for example Josephus, (Antiquities 6.171) and a Dead Sea Scroll fragment known as 4QSama both give Goliath's height as 'four cubits and a span', as do certain other editions of the Septuagint, or Greek translation of the Old Testament (285 - 246BC). Therefore, it is possible that Goliath was, in fact, closer to six feet nine inches tall, which might still have been considered to be 'giant' in those days.

Although the archaeological evidence leaves no doubt that King David of Israel was a real historical figure; and that Goliath was a name extant in the region at the same time, there is as yet no proof that a giant named Goliath fought with the future King David and was slain.

For those interested in 'the Bible as history', it is interesting to note the extent to which modern archaeology is able to uphold even the most ancient of biblical texts.

1A note about measurements used would be appropriate here. The cubit is a unit of linear measurement, from the elbow to the tip of the longest finger of a man. This unit is commonly converted to 0.46 metres or 18 inches, although this varies according to the proportions of the man doing the measurement. A span is the length from the tip of the thumb to the tip of the little finger when the hand is stretched out (about 23 cm), and a shekel is a measure of weight approximately equal to 16 grams.2It is interesting to note that the Moabite Stone contains the earliest known extra-Biblical occurrence of the tetragrammaton.3Mesha was ruler of the small kingdom of Moab, east of the Dead Sea, in the mid-9th Century BC. Everything known about the Biblical Mesha is recorded in 2 Kings, chapter 3.4Mentioned in the Old Testament at Numbers 13:22, 28, 33; Deuteronomy 1:28; 2:21; and Joshua 11:21.5The Iron Age commenced in Israel during the days of the Judges. The book of Judges is believed to have been written by the prophet Samuel around 1050 to 1000BC.6A prehistoric age spanning approximately the years 4500 - 3500 BC, between the Neolithic and Bronze ages. It was characterised by the human use of copper and stone tools. The word is derived from the Greek words for copper (chalcos) and stone (lithos).