Watford, Hertfordshire, UK Content from the guide to life, the universe and everything 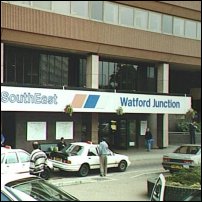 Watford. It's almost, but not quite, in London, despite being served by the London Underground and London Overground rail networks. Although it's in Hertfordshire, it doesn't really fit the profile of a charming Home Counties2 market town. It's the birthplace of such luminaries as Michael Bentine, Geri Halliwell, Vinnie Jones, Cyril Fletcher, Nick Leeson, Mo Mowlam, Terry Scott and Bradley Walsh. And, contrary to popular opinion, it doesn't have a gap. In fact, let's get that out of the way first...

Some 50 miles to the north of Watford is... Watford. This small Northamptonshire village gave its name to a pass - or 'gap' - in the local range of hills, through which several economically important routes have passed: the Roman road known as 'Watling Street' (now known, more prosaically, as the 'A5'), the Grand Union Canal and the M1 motorway. The name 'Watford Gap' became famous when Britain's first motorway service station (on the aforementioned M1) was opened there in 1959. It has since entered common parlance as a theoretical marker between the North of England (all flat caps, whippets and Coronation Street) and the South (City types who earn fortunes despite never having done an honest day's work down't pit in their lives). This makes some sort of sense, as Watford Gap is reasonably close to the centre of England. Of course, it is routinely confused with the more southern Watford, although the latter does provide a useful marker of the point at which the world ends for the sort of Londoner who thinks that civilisation stops at the M253.

But enough of the more northerly Watford. What about the southern one..?

Numerous derivations have been provided over the years for the name 'Watford', and the only thing that anyone seems able to agree on is that the 'ford' part relates to a ford across the River Colne. Suggestions - some more desperate than others - include:

The Mists of Time

Early references to the ford on the River Colne have been found in Anglo-Saxon documents (c9 - 10th Century), but the lack of an actual settlement on the site is shown by the omission of Watford from the Domesday Book of 1086 AD. The manor of Cashio (or Cassio), of which Watford was a part, is mentioned, however, and the book highlights the importance of agriculture to the local area. The history of Watford as a town really begins in the 12th Century, with the granting of a royal charter to hold a weekly market. Development of the town continued with the building of St Mary's church, which remains the parish church of Watford to this day, having been extensively restored in the late 19th Century.

A Change of Ownership

From the time of the royal charter onwards, Watford was administered by the Abbot of the Manor of Cassio. This arrangement lasted until the 16th Century dissolution, when Henry VIII closed all monasteries and abbeys and took control of their lands. The Manor of Cassio was sold and later became the possession of the Earls of Essex. Administration of the town, including the market, land disputes and minor infringements of the law, fell within the purview of the Earls, an arrangement that lasted until the early 20th Century.

By the 18th Century, brewing and silk preparation had joined agriculture as the most important industries in the area. The arrival of the London and Birmingham Railway and development of the paper-making industry meant that Watford's importance as an industrial centre grew, with an associated expansion of the town to house new workers.

Like most former industrial towns in the United Kingdom, Watford saw a decline in manufacturing industry during the 20th Century. Today, Watford exists largely as an outpost of London - a place where it's cheaper to live or rent office space and yet still be within a 20-minute train journey of central London.

So You Want to Come to Watford?

Watford's transport links, both with London and with the rest of the country, are excellent. It lies near the intersection of the M25 and the M1 motorways, within easy reach of numerous other major routes.

The town has several railway stations, including Watford High Street and Watford North, but Watford Junction is the most important. It lies on the West Coast Mainline, which connects London Euston with Manchester and Glasgow, and trains to all three can be caught there. Trains also connect London with Birmingham and Northampton, and local trains (part of the London Overground network5) visit numerous destinations between Watford and London, coinciding with the London Underground's Bakerloo line for part of its length. Speaking of the Underground, Watford also has its own Tube station, to be found at the end of one of the north-westerly branches of the Metropolitan Line. At the time of writing, there are plans to extend or divert the Metropolitan line to Watford Junction.

For those planning to leave the country, Watford is reasonably close to Heathrow and Luton airports, which are served by buses from Watford Junction, while Gatwick and Birmingham airports can be reached by direct train from Watford Junction. For those in less of a rush, the Grand Union Canal passes very close to Watford, and is probably the most scenic of the various forms of transport available.

A Selection of Things to Do

Cassiobury Park is easily the largest open space in Watford, with over 190 acres of park and woodland. For many years, the park was owned by the Earls of Essex, and the family lived in a large house within its grounds. In the early 20th Century, the parkland was gradually sold to Watford Borough Council, some of it being used for housing and the remainder kept as a public park. In 1927, the house was demolished, the only surviving parts being the stable block (later converted to a retirement home) and the grand staircase, which is now housed in the Metropolitan Museum of Art in New York, USA. Today, the park's facilities (in addition to the woods and fields) include children's paddling pools, a miniature railway, tennis courts and a cafe.

Watford Museum is housed in what used to be a mansion belonging to Benskins Brewery. The museum is devoted to all aspects of local history, including its industrial and sporting heritage. Its exhibits also include the Cassiobury Collection of fine art, collected by the Earls of Essex over more than 300 years.

The Palace Theatre, just off Watford High Street, has been staging performances since 1908. The building itself is 'one of the most elegant Edwardian theatres in Britain', and is a Grade II listed building.

Watford Colosseum is primarily a classical concert venue and is used frequently by the likes of the BBC Concert Orchestra, the Royal Philharmonic Orchestra, the London Symphony Orchestra and the English Chamber Orchestra. The Colosseum can also be hired as a conference or exhibition venue, or even privately for weddings and parties.

The Pumphouse Theatre & Arts Centre is, not surprisingly, housed in what was once the water pumping station for Watford. When it fell into disuse in the 1970s, the building was converted into a theatre, and has since been expanded to its current role as a 124-seat auditorium and concert venue. The centre acts as a focal point for local arts groups, including visual arts as well as music and theatre.

In the centre of Watford is the Harlequin Centre, a shopping mall containing over 130 shops, including all the usual chains, as well as a few smaller independent stores. Just don't try to get into any of the car parks at a weekend...

Next door to the Harlequin Centre is the Covered Market, the descendent of the historic market that gave life to the town in centuries past.

Vicarage Road stadium is the home of Watford Football Club, who usually play their football in the Championship or, occasionally, Premier League. Perhaps the club's most famous association is with the singer Elton John, who became club chairman in 1976 and, under the management of Graham Taylor6, the club was transformed from the lower-league outfit it then was. Elton eventually resigned as chairman, and was later appointed the club's 'honorary life president'. Vicarage Road stadium is also the home to Saracens Rugby Football Club of the Guinness Premiership.

Just outside Watford, on the site of an old Rolls Royce aircraft factory, sits Leavesden Film Studios, home of the Harry Potter films, as well as Star Wars Episodes I and II, and the Tim Burton/Johnny Depp film, Sleepy Hollow. The studio was created in 1995 for the filming of the James Bond film, GoldenEye, and has since developed into a major industrial park.

1'Yield not to misfortunes, but advance all the more boldly against them'. Watford's coat of arms bears the word 'audentior' from this quotation.2A name for the, traditionally quite posh, counties immediately surrounding London.3The orbital motorway that surrounds Greater London.4Fences made of wooden stakes and branches.5If you're trying to get from London to Watford, or vice versa, it's worth remembering that the Overground stopping service takes more than twice as long as the 20-minute mainline journey.6Who subsequently went on to be manager of the England national team.