Church Tales: Part One Content from the guide to life, the universe and everything 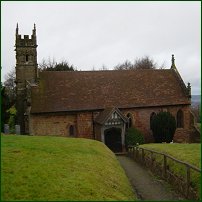 Lo, in the lyf of Seint Kenelm I rede,
That was Kenulphus sone, the noble kyng
Of Mercenrike, how Kenelm mette a thyng.
A lite er he was mordred, on a day,
His mordre in his avysioun he say.
- Chaucer, The Nun's Priest's Tale1

St Kenelm's Church in Worcestershire is a small, old church set back on a twisting country lane leading up to the Clent Hills in Worcestershire, an area much loved by a young JRR Tolkien who recuperated in the West Midlands after contracting a fever in the Great War.

At the back of the church there's a spring and a well and tradition has it that St Kenelm, once king of Mercia, was murdered there. At the very spot where he was slain, a spring issued forth from out of the earth and the waters of that spring were said to have healing properties. People from all over made a pilgrimage to the church, to receive these waters, and to heal themselves. Bandages were left near the site of the well as tokens of pilgrimage and gratitude, and to this day, people tie ribbons to a nearby tree in an echo of the age-old practice, offering silent prayers for those who are suffering from illness.

Visiting this tucked-away church, diminutive in its aspect, you could easily miss the weathered plaque at the back of the grounds, down a narrow slippery slope, which marks the spot where the spring lies. Once there you can also see a solitary tree covered in ribbons, some old and worn, some new, which hints intriguingly at a time long since past.

Inside the church, part of the old original wall has been exposed revealing a faded medieval fresco which depicts a scene from the gospels. This was one of the ways in which medieval churchgoers could 'receive' their religious illumination. To look at the simply-drawn figures, the faded blues and yellows, is to feel at once connected with a living Britain, but one which is 800 years old. It's great fun to imagine what the folk looked like all those years ago, what they wore, what they felt and hoped for, as they received their sermons staring at that very same wall, different only in that the paint would have been so much brighter than the fading hues we see today.

All Saints Church in the peaceful village of Culmstock in Devon, features a yew tree actually growing out of the bricks of its tower!

The spire was taken down in 1776, leaving a yew tree growing from the top of the tower, where it was already an institution by 1835 and remains the most distinctive feature of the church today. Inside the tower, the oldest of eight bells carries the inscription 'Ave Maria Gratia Plena' and the date 1558, the year before Elizabeth succeeded Mary on the throne, and the very last year such an inscription would have been tolerated in England.
- Taken from the Upper Culm Valley Parish Churches website

You can't help wonder how the tree got there in the first place and once it took root, why it was allowed to grow for 200 years or more. Is there something sacred about yew trees? Might there be some connection to older 'pagan' or countryside beliefs, now long disappeared with the Industrial Revolution? Local lore has it that when the church was subject to a small fire in the tower, fire fighters and locals with buckets of water fought frantically to save the tree.

An interesting aside: two members of the vicarage achieved great eminence. In 1830, aged nine, Frederick Temple came to live in Culmstock. He eventually became archbishop of Canterbury and it was he who crowned Edward VII. Five years later, in 1835, Richard Dodderidge Blackmore then aged ten, also arrived at the Vicarage. Blackmore was to achieve great fame as the author of Lorna Doone and another novel of his, Perlycross, which is more specifically set in and around Culmstock, is equally worthy of mention.

Houldsworth Mill in the district of Reddish in Stockport was built in 1865, at the height of cotton production in the north-west of England. It was commissioned by William Houldsworth (1835 - 1917), a son of one of the region's wealthiest industrial families. As well as a mill, Reddish boasts a road, a large pub and the main town square all named in his honour.

It was Houldsworth family money that enabled the construction and dedication of St Elizabeth's Church, an Anglican edifice whose spire co-dominates the Reddish skyline. This spire can be seen from miles away, and the church itself is a grand and imposing building that seems out of place in a district of Stockport which, sadly at the time of writing, is moving socially downwards. The church, on the corner of Leamington Road and Houldsworth Street, faces the Mill and is well worth a visit by people with an interest in Victorian mock-Gothic eccleasiastica.

And the soap opera link? The church and grounds have often been used for location filming for Coronation Street, one of the UK's longest running and most-loved television programmes. Various Street weddings have 'happened' in this Church, with filming taking place both inside (there is a grand and imposing interior) and outside, where the backdrop of Northern terraces places it firmly in 'Coronation Street' country. There is even a character in Coronation Street, Reg Holdsworth, whose name is a derivation of the original family name.

Granada Television's location fees go towards the church up-keep, and the current vicar can occasionally be seen on television playing the organ during Street weddings; he is not at all worried that his Anglican church is used to represent Weatherfield's local Catholic church, Weatherfield being the fictional town of the show!

There is an interesting footnote to the story of St Elizabeths, in that the church made national news in the late 1970s and early 1980s for 'showers of mysterious cash' raining from the heavens. Fortean Times, the supernatural publication, probably preserves the full story, but in essence, the incumbent vicar claimed to have been walking in the church grounds whereupon he was assailed by money not so much thrown as floating down from the heavens above, bending, if not breaking, the accepted laws of gravity as if it were being carried down by invisible hands.

This happened not once but several times over a period of two years: the money was always current British currency, never notes, but amounts of about £5-£10 a time in coin of 50p and below. The vicar took this as miraculous invention on the part of St Elizabeth (aunt of the Virgin Mary and mother of John the Baptist) and assurance the money problems faced by the Church would soon be reconciled.

While the mystery was never solved, it may be worth noting that this particular vicar had to retire on health grounds in the early eighties, and the showers of coins were only coincidentally witnessed by others - there is a local suspicion that a shrewd minister was drawing free publicity to the Church's cashflow problems so as to solicit more orthodox donations from devotees of the Saint who had been shown the way by her personal attention.

1In Modern English:
Now, take St Kenelm's life which I've been reading;
He was Kenulphus' son, the noble king
Of Mercia. Now St Kenelm dreamt a thing
Shortly before they murdered him one day.
He saw his murder in a dream, I say. - translation by Nevill Coghill.