Church Tales: Part Two Content from the guide to life, the universe and everything 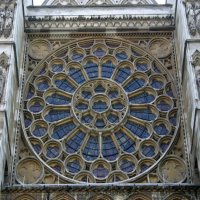 In the climactic months of the Second World War, The War Office on behalf of the British Army (who currently own 94,000 acres of land on Salisbury Plain for training purposes) requisitioned the village for strategic purposes - to train troops for D-Day - evacuating all villagers giving them just 47 days' notice. Those villagers were much praised at the time for their sacrifice for the war effort and were assured safe return to their homes within six months. It never happened. They never returned. The village remained completely deserted and to this day it and its lovely Grade II-listed old church lie within the secret boundaries of the Ministry Of Defence's training headquarters. Only once a year on the feast of St Giles in September is a road opened up to the public to give access to the old church and to allow faimlies to tend the graves.

Inside the church there is a wall painting from the 15th Century, depicting Imber Village itself.

The church of Saint Cynwyd is in the parish church of Llangynwyd, a hilltop village in the Llynfi valley, Mid Glamorgan, South Wales. The Welsh word Llan usually translates as 'church', but in placenames it refers to the parish. Many places in Wales take their names from the Saints in this way.

The church was founded in the 6th Century by Saint Cynwyd, a local saint. It is the only church in Wales that bears his name. Little remains of the original structure (made of rude stone, wattle, timber and mud) apart from a stone socket for a wooden cross which the founder set up in the church. This was found built into one of the walls during repairs in 1850. It is now fixed into the wall of the porch.

The church has been rebuilt and restored a number of times, being first rebuilt in Norman times and then again restored in the 13th Century. There was another rebuild in the 15th Century and the square tower dates from that time, as do four oak pews inside the church. In the 17th Century the church was given a new roof and three windows were placed in the south wall. The last complete restoration was in 1893 at a cost of £3000 paid for by Miss Olive Talbot of Margam Castle. There was further restoration of the tower in 1931 and the beautiful east window depicting the ascension of Christ was put in at that time.

There are six bells, dating originally from 1730, but two of them were recast in 1786. On October 14th, 1980, a plaque was dedicated by the assistant Bishop of Llandaff to mark the 250th anniversary of the hanging of the bells.

One notable vicar was Samuel Jones, incumbent of the parish from 1647 to 1662. When episcopal rule was restored and the act of uniformity was passed in 1662 he gave up his incumbancy and retired to his farm of Brynllewarch. Here he established the first college in Wales for the education of young men for the Non-conformist ministry. His tombstone can be seen near the south wall of the church.

The Maid of Cefn Ydfa

A simple youthful lad am I
Who loves at fancy's pleasure:
I fondly watch the blooming wheat,
Another reaps the treasure.
- Tr. 'Watching the White Wheat'

The church also hosts the graves of Wil Hopkin1 and Anne Thomas (known as 'The Maid of Cefn Ydfa'), a local couple famed for an 18th-Century romance.

Anne Thomas lived with her widowed mother in Cefn Ydfa mansion in Llangynwyd. She was heiress to the estate so her mother was determined that she should make a rich marriage. However, Anne had fallen in love with Wil Hopkin a tiler who had been repairing the roof. He was also an acomplished poet and, for Anne, he wrote the love song, 'Begeilio Gwenith Gwyn' which is still sung by Welsh choirs today.

Anne and Wil met in secret, but the romance was eventually discovered by her mother. She imprisoned Anne in her room and forced her to agree to marriage with Anthony Maddocks, a rich and sucessful lawyer. With stories such as 'Cefn Ydfa' it is sometimes difficult to separate facts from legend, but legend has it that when Anne was imprisoned, her mother took away all her writing equipment, so Anne picked sycamore leaves from a tree outside her window and cut her finger so as to write messages to Wil on the leaves using her own blood. She then dropped the leaves through the window to a maid who passed them on to him. Unfortunately, the maid was caught by Anne's mother.

After the wedding of Anne and Anthony Maddocks, Wil left the village and went to Bristol. The legend continues that he dreamed one night that Anne was calling out to him and he returned home to find that she was on her death bed. The family allowed him to see her and she died in his arms. She was buried in the family grave in the chancel of the church. Wil Hopkin died 14 years later, and was buried in the church yard under a yew tree. The original gravestones are now in the tower. The parish register of 1725 containing the Marriage entry of Anne and Anthony Maddocks can be seen in the church.

There have been many poems written about this story. As they were often recited at Eisteddfodau (the Welsh poetry and music festivals) they are in the Welsh Language. Operas have been composed by Dr Joseph Parry, and Dr Hayden Morris Ap Madoc wrote a libretto with music composed by JJ Mason of the USA, which was performed many times before Welsh communities there. In 1980, at the National Eiseddfod in Gowerton, a new play was performed by Cwmni Theatr Cymru at the Grand Theatre in Swansea, and 4000 tickets were sold in advance in Bangor, North Wales, for the company's production of a musical play by Rhisiart Arwel The White Wheat.

The island of Inisheer is the smallest of the Aran Islands, a group which protects the entrance to Galway Bay. Windswept and stony, these islands are harsh places with very little vegetation.

In the 10th Century, the intrepid Saint Caomhán (pronounced Kway-vawn)2 came to Inisheer and built a church. The ruins of this church are still standing and are known as Teampall Caomháin (Caomhán's Church). Legend has it that the saint lived in this tiny building, eating nothing but limpets which he picked off the rocks of the coast nearby. It sounds incredible, but it is certainly true that all the ground around the church is buried in limpet shells to a depth of a few feet!

The church was built next to a sandy area, and the action of the wind over the centuries has piled the sand up until it now forms a mound, with the church set deep into it. All that's left of the church are the four walls, so you have to climb in through the open roof, but there is one other means of access: the narrow window at one end. Only about six inches wide, a slim person can just about slide in through it, and legend guarantees a place in Heaven to anyone who achieves this feat.

Isolated churches such as this were common enough a thousand years ago. The solitary saint would have lived his life in prayer and relied on gifts of food and clothing from the local people. They in return would have been glad to have a resident holy man who could plead their case with their deity.

St Helen's Church in Bishopsgate3 is one of those London treasures that you probably wouldn't notice unless you were looking for it. It's in the shadow (literally) of its surroundings: in the heart of the City of London, it's yards from the Lloyd's Building and the 30 St Mary Axe (better known as the Swiss Re Building or 'Gherkin').

The origins of the building go back to 1210 when the Dean and Chapter of St Paul's allowed the establishment of a nunnery on the site, to the north of an existing church. The nun's church is built alongside the older church. Over the years the building was extended and altered. Four great arches, which are a key feature of the building today, were added. In 1538 the nunnery was surrendered to Henry VIII who was very much into that sort of thing at the time. St Helen's Church was also apparently Shakespeare's parish church in the early 17th Century.

Having been one of the few City churches to survive both the 1666 Great Fire of London and then the Blitz, St Helen's was badly damaged by the explosion of an IRA bomb oustide the Baltic Exchange in 1992 and a second bomb in Bishopsgate the following year. It has now been restored; the architect Quinlan Terry using the restoration as an opportunity to lift the floor to its medieval level, and to install under-floor heating.

Having passed it countless times, I took a proper look at the outside of this church a few months ago and had to find out more about the history of its architecture. It's one of those amazing London buildings that's adapted to suit the needs of a community as time has gone on.
- h2g2 Researcher

1The Welsh spelling is 'Hopcyn'.2This elusive saint is sometimes spelled Cavan or even Kevin. He is not to be confused with the more famous St Kevin who set up a monastery in the east of Ireland.3Or to give it its full name, St Helen Bishopsgate with St Andrew Undershaft & St Ethelburga Bishopsgate & St Martin Outwich & St Mary Axe.