Church Tales: Part Three Content from the guide to life, the universe and everything 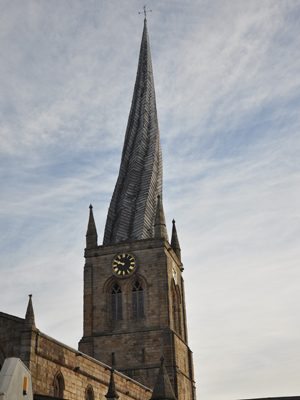 Although St Aldhelm's Chapel is an ancient monument, it is still in use at certain times of the year. The chapel stands in an isolated spot on the edge of a cliff 150 feet above the sea in the parish of Worth Matravers in Dorset, Southern England.

Visitors will no doubt first notice that the 7.77-square-metre shape is unusual for an ecclesiastical building. Secondly, the angles of the building are pointing approximately to the cardinal points of the compass, not the walls as is customary. Apart from serving a small Christian community (or 'cell') that had been there long before the 12th Century, St Aldhelm's Chapel also served as a lookout position for Corfe Castle on what would have been the castle's blind side in the channel approach.

There are medieval graves outside the walls, and in a field close by a medieval grave was excavated. Inside it was a female, aged 30 to 40 years old at the time of her death. She was thought to be an an anchoress living a holy life close to the chapel as the foundations of a small building two metres squared were close to the grave. Local legend has it that there was a leper colony there and so perhaps she ministered to them.

The Norman pillar in the chapel had been used by young girls who wanted their wishes granted and intriguingly lots of old hairpins and trinkets were found in the hollow pillar when the building was being restored. There is also some grafitti on the pillar dated 1665.

The new altar table in the chapel was consecrated in 2005 by the Right Reverend Dr Rowan Williams, Archbishop of Canterbury, as part of the 1300th celebrations of the anniversary of St Aldhelm becoming Bishop of Sherborne.

St Aldhelm himself was a kinsman of Ine King of Wessex. He was a Latin poet and an ecclesiastical writer who recieved his early education at Malmesbury, in Wiltshire, and his teacher was an Irish Christian named Maildubh. On returning to Malmesbury he took over from his former teacher Maildubh and directed Malmesbury school as Abbot of the monastery. His life as the Abbot was austere and it is recorded that he was wont to recite the entire psalter up to his neck in ice-cold water in a barrel.

In the year 705, Hedda Bishop of the west Saxons died and, his diocese being divided, the western portion was assigned to Aldhelm, who reluctantly became Bishop of Sherborne. He was reluctant because he wrote several treaties trying to unite all the dioces. His episcopate was fairly short-lived as he died at Doulting in Somerset in 709. His body was carried 50 miles back to Malmesbury; crosses were erected at each halting place that his body rested overnight. Many miracles were attributed to him both during his life and after his death. His feast day was on 25 May and in 857 King Ethelwulf erected a silver shrine at Malmesbury in his honour.

Aldhelm was the first Englishman who cultivated classical learning with any success, and the first of whom any literary remains are preserved.
- taken from Stubbs in the Dictionary of Christian Biography.

Incidentally, there's a lovely pub in Worth Matravers called The Square and Compass which has been run by the same family now for over a century:

Why do you think I keep going there. Trouble is, it is a good half-hour drive if I use the studland ferry, so I am limited to one pint which is very hard work as the ale is superb.
- h2g2 Researcher

The Crooked Spire is the nickname of St Mary's and All Saints Parish Church, in Chesterfield's town centre. As you can probably guess from the name, the spire is what the church is known for. It not only leans, with the spire 9 feet 5 inches away from the true centre, but it's also twisted. As an important local landmark, the spire has been used as a symbol to represent many local organisations, including the local football team affectionately known as the Spireites. Also, the town's motto is 'Aspire' in its honour. Many businesses have named themselves after the spire.

Possible Causes of the Twisting

A number of factors seemed to have led to the twisting.

The use of unseasoned timber in the construction of the spire is one possible factor. The heat from the sun may have warmed the lead tiles on the roof, conducting heat to the wooden frame, drying out the wood, and causing it to warp.

Another possible factor is the lack of cross-bracing, resulting in the spire being unable to fully support the heavy lead tiles which weigh a total of 32 tons.

These two possible factors may actually be linked to the Black Death - the Bubonic Plague - that aflicted the area in 1349, during the actual building of the spire. The Plague may well have killed off many of the skilled workers required for the complex construction of the spire, leaving those with less experience to finish the job. It's also possible that some of the damage may have been the result of the weather and bell-ringing.

Legends about the Crooked Spire

As well as scientific explanations of the twisting, there are many legends that tell of how the spire became crooked.

Yet another legend has it that a magician convinced a BolsoverBolsover is a town in Derbyshire, England, not far from Chesterfield and the church. blacksmith to shoe the devil, but he drove a nail into the devil's foot. The devil then skimmed over the spire, and lashed out at it in pain, causing it to twist. Also, similarly, some believe that the devil sat on top of the spire, causing it to twist out of shape.

There are many more alternative versions, variations and combinations of all these legends in existence still today.

On 22 December, 1961, there was a fire in the Crooked Spire, that at one point threatened to destroy the church

At 9.25am that day, a clerk at Chesterfield Library raised the alarm, when smoke was seen coming from a large windown in the north transcept. Soon afterwards, the glass in the window melted, and flames came out through it. Also, the choir robing room and church organ were lost to the flames.

While many firefighters worked to fight the blaze, clerks at the library, along with church officials tried to salvage as much as they could, including furniture, church registers, and valuable books and ornaments, some of which were stored in the library.

After many hours, the fire was put out, leaving much of the north transcept gutted. Fortunately, quite a lot of the contents of the transcept were salvaged. One of the main losses though was the Schenelter organ, which was one of only six in the world.

The colony of South Australia was founded specifically to allow free Christian worship without any persecution or intolerance. For many, a life under a civil government controlled by the British Crown which was in a new land without the pressure (often violent) to conform to any religious view was very attractive. Large numbers of German (Silesian), English (Cornish) and Scots came here. Some small country towns have an old, disused 1850s chapel for every five or six households.

The first Church of England bishop appointed to the colony, Augustus Short, arrived expecting all of the trappings usually afforded a Bishop of the Established Church. When he arrived, he was in for a shock; he barely had a house, no church, no schools and a very antagonistic community. The nearest next diocese was over 800 kilometres away in Melbourne, where the Church of England was very established!

When Bishop Short looked at the plans for the city (which were largely just that - plans), he realised that the initial town surveyor, who was an ex-army man, had centred the town around a site marked with a cross. This was clearly where his cathedral should go.

When Short tried to acquire the land and start building, the government, city and most of the population started a court case to prevent the back-door establishment of the Church of England. Short lost the court case and was forced to build his new church and home in the small village of North Adelaide on the other side of the mud patch called the River Torrens.

Augustus Short had the last laugh. The site in North Adelaide is now home to one of the most prestigious addresses in the city. It gives the name to the Cathedral End of the Adelaide Oval - part of international cricket lore - and it is seen towering over the scoreboard by people all over the world during the Ashes and other Test television coverage.

The building inside is quite nice too. Oddly enough, the families who furnished it were mostly those who objected to the Established church. They may have objected to it being in the city, but they have made sure that that is where their memorials lie.

Incidentally, the cathedral also has the second heaviest ring of bells in the world which makes it a very popular destination for bell ringing tourists - especially during test matches when the continual ringing peal attempts drive the spectators at the Oval insane.

St Stephen's Chapel was built in the old Palace of Westminster, the idea being Henry III's but the building wasn't started until 1292 after his death. It was completed five years later in 1297.

When the Palace of Westminster ceased to be a royal residence the chapel became the debating chamber in the House of Commons. St Mary's Undercroft, a smaller chapel located in the crypt of the bigger St Stephen's, was used as a chapel, a cellar and a dining room; and while Oliver Cromwell was in power, he ordered his soldiers to destroy the elaborate carvings and wall paintings and to use the room as a stable.

Most of the old Palace of Westminster was lost in the fire of 1834, including St Stephen's Chapel. St Mary's Undercroft, however, did survive and it continued to be used as a storeroom.

On the night of the 1911 census, suffragette Emily Davison (the same person who threw herself under the King's horse at the 1913 Derby) hid in a cupboard in St Mary's Undercroft so that she could put her address on the census as 'The House of Commons' and so show that women could also be in Parliament.

In the 1980s when St Mary's Undercroft was restored they discovered that under the whitewash on the walls was the original medieval wall paintings; it seems that Cromwell's soldiers hadn't destroyed them after all. They probably felt that they were too good to lose and so instead had simply whitewashed over them.

St Mary's Undercroft is now used as a chapel again and has regular services and is open to the public on certain days. It is located under St Stephens Hall and St Stephen's Porch which was built where the old St Stephen's chapel used to be.