30 St Mary Axe, London, UK Content from the guide to life, the universe and everything 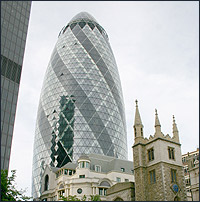 30 St Mary Axe opened on 27 April, 2004, although its official opening was not until the end of May, 2004. Infamously known as 'the Gherkin' due to its 3D oval shape, it is one of the first landmarks to become visible when you're travelling into London from many different places. It appears to be challenging even the London Eye in popularity as a favourite for film-makers wishing to establish the location of their film. 30 St Mary Axe is a striking piece of modern architecture, possibly one of the most beautiful office buildings in the country.

Although commissioned by Swiss Re as its British headquarters, this company only occupies floors two to 15. It was designed by architect Sir Norman Foster, whose team is also responsible for City Hall and the Great Court of the British Museum, both in London. These three buildings all share what has become a trademark of 30 St Mary Axe: flat glass panes which together form a curved surface. In reality, the only curved glass pane in 30 St Mary Axe is its top 'lens'.

30 St Mary Axe is 180 metres high and at its maximum point is roughly 57 metres in diameter. The 41 floors of the building, varying in area because of the exterior shape, are laid out like a flower with six petals. The floors are arranged in a spiral, with the layout of each floor beginning slightly after the preceding floor. This is illustrated by the striped pattern around the outside of the building. At the very top is a restaurant with a 360-degree panoramic view. St Mary Axe itself is a vast plaza with trendy shops and restaurants.

Situated in the City, 30 St Mary Axe is built on the site of the Victoria Baltic Exchange, a building badly damaged by an IRA bomb in 1992. The planning application was passed by the Deputy Prime Minister, John Prescott, despite it meaning that the Exchange (a listed building) would have to be demolished. English Heritage agreed on the grounds that the Exchange would be difficult to restore. This was a controversial decision which displeased the Chief Executive of the Exchange, Jim Buckley. The Baltic Exchange moved to new premises at 38 St Mary Axe.

30 St Mary Axe was designed to be as ecologically sound as possible. Its curvaceous shape does not create wind tunnels like a rectangular skyscraper would. The central column distributes fresh air from outside through the building; this is more energy-efficient than an air conditioning system. The fa¸ade has an inner layer which captures and redistributes heat. The windows are cleaned using window cradles and a hydraulic cherry-picker is used on the upper levels. The many windows flood the building with natural light and motion sensors are used to determine when artificial light is required.

Since 2003, 30 St Mary Axe has won 11 awards, including the prestigious RIBA Stirling Prize in 2004. RIBA stands for the Royal Institute of British Architects. The Stirling Prize consists of £20,000 and is awarded to the building deemed to have made 'the biggest contribution to British Architecture'.1. The other ten awards are listed here:

Bearing in mind that 30 St Mary Axe is a private office building it is perhaps unsurprising that tourists are not particularly well catered for. However, parties of eight can tour the parts which are not private offices, including the panoramic views at the top. Private parties can apply to hire the restaurant for functions. Unfortunately, both the tour and hire charge are expensive. The plaza itself is open for anyone to enjoy.