On Sunday 23 October, 2011 I was able to fulfil a long-held wish. My partner and I visited the church in Much Hoole, Lancashire, where Jeremiah Horrocks worked. It was his ecclesiastical duties which kept him from holding a longer vigil during the transit of Venus on Sunday 24 November, 1639. Luckily though, Horrocks was able to witness the transit for about half an hour. Papers discovered after his death at the tender age of 22 years granted him posthumous glory in the realm of astronomy. Much Hoole became a magnet for Venus-transit enthusiasts and the church now boasts a Horrocks Memorial Chapel along with a specially-designed stained glass window honouring the young cleric. After I researched his story and wrote up the Flea Market rescue of the history of the transits of Venus, I determined to visit the church one day. I wasn't disappointed! The church door is the original, complete with fittings and key - above the door is the date 1628. We had arranged with the Church Warden Eric Barker to be met so that we could view the inside of the church and the memorial chapel. I saw Horrocks' stained glass window along with another dedicated to the wonders of astronomy. Mr Barker generously gave me two booklets detailing the history of St Michael's of Much Hoole and Memoriam Horroccii - A Chapter of Romance in Science 1639-1874, along with a pamphlet inviting me to become a 'friend of St Michael's' for a small annual fee1. 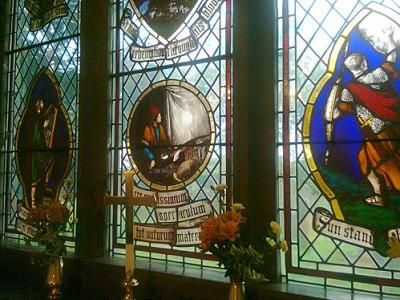 I did take some photos (with permission) and I felt honoured to have been in the same place where Jeremiah Horrocks once worked and worshipped. I think that it is an incredible coincidence that Jeremiah Horrocks was destined to have such a short lifespan, yet during it he was in the right place at the right time, had the genius to predict the upcoming Venus transit (proving the great astronomer Johannes Kepler wrong) and therefore be (so far as we know) the first human to witness the event. Considering that some great astronomers (like Edmond Halley) lived to a grand old age between Venus transits makes Jeremiah Horrocks all the more special. It's a great pity that Jeremiah Horrocks isn't much better known - in my opinion he deserves to be a household name like Sir Isaac Newton. It was the great Newton (born in the year after Horrocks died) who said:

If I have seen further than others before me, it is because I have stood on the shoulders of giants.

This month sees the 4th anniversary of my astronomy column for The Post.

I hope readers enjoy it as much as I enjoy writing it!

1For £10 you will receive two newsletters a year, will receive invitations to special services and social events and are welcome to visit the church at any time by prior arrangement with the secretary of the Friends of St Michael's.2NEVER look for Venus (or Mercury) without suitable eye protection when the sun is above the horizon in case of accidental solar glare which can lead to eye damage.