Flagstaff, Arizona, USA Content from the guide to life, the universe and everything 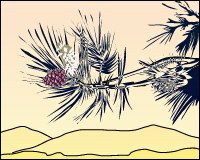 There are places on this planet where life goes by at a rapid pace; places where people and animals and other breathing things rush about as if there were many important things to be done; places where if you were, say, a greengrocer it might be very tough keeping your shelves stocked. Flagstaff is very much like one of these places - but exactly the opposite. It is a place where things move slowly, most notably the traffic.

Flagstaff (population 55,000) lounges idly at 7000ft above sea level, in the northern part of the state of Arizona, atop a geological formation called the Mogollon ('mow-geee-yawn') Rim. The rim is a large volcanic flow of what is now basalt rock, which does a rather fine job of separating the northern Ponderosa pine forests from the southern deserts, and a rather fine job of overheating any cars trying to scale its heights.

Flagstaff is the largest city on top of the rim and sits at the foot of Mount Humphreys, Arizona's tallest mountain. At 12,631ft Humphreys' peak is a unique feature. It is a dormant volcano that occasionally gives the Flagstaff locals a small earthquake to get excited about, and it features six natural biological zones and a ski area. A walk from the foot of the peak to the top is said to be like a walk from Mexico to Alaska in terms of biological diversity (though probably shorter).

It might be worth noting, as well, that Flagstaff is surrounded by the largest contiguous stand of Ponderosa pine trees in the entire world. Completely cut down and cleared around the turn of the 20th Century, the local forests have come back with a vengeance only nature can bring forth. The hordes of tourists find them charming, and the local forest rangers and firefighters find them frightening.

Flagstaff is a real tourist Mecca located a mere one hour's drive from one of the world's seven natural wonders, the Grand Canyon. Also in the area are the lovely Red Rocks and tacky strip malls of Sedona, Arizona - a real New Age Mecca. Flagstaff is also located near to the Painted Desert, the Petrified Forest, Meteor Crater and a very large other-worldly landscape of volcanic cinder cones and lava fields. All of this adds up to more hotel rooms than can be filled even on the nicest summer days, and streets that, unlike the hotel rooms, fill up before the many McDonalds serve the first McWhatever.

This is not to say that Flagstaff is not a charming place. It is. For the minority of people who make a fair living outside the tourism industry, Flagstaff can be a wonderful place to raise family, poultry, or both.

With its proximity to the largest Native American reservation anywhere, and the fact that there is a full-scale university (Northern Arizona University) in the town, Flagstaff has culture. Not Paris culture, not even San Francisco culture, but culture all the same: a laid-back, relaxed sort of culture; a place that has more artists and Master's degrees per capita than maybe any place you have ever been to. Chances are, the person serving your morning latte is smarter than you. Compared to Phoenix (the large horrid sprawling metropolis 155 miles to the south) Flagstaff is a welcome Bohemia.

To sum up: in Arizona - a state losing its identity in the onslaught of new residents all from 'somewhere else' - Flagstaff is unlike anywhere else. Flagstaff provides a more authentic Western experience than probably anywhere else. That experience will range in history and scope from the original 'Old West' to the depth of Native Culture; from the history of the train to the golden age of Route 66; from exciting outdoors activities to laid-back coffee shop sitting.

Flagstaff offers its residents and its visitors an unmatched experience.