How to Smell a Ponderosa Pine Content from the guide to life, the universe and everything 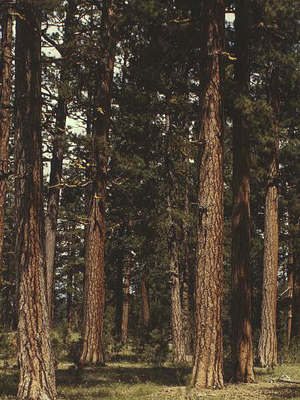 Ponderosa pine are native to the western interior of North America, and can particularly be seen in north-eastern Washington and Oregon, northern Idaho, Utah and California, and southern British Columbia in Canada. If you are further south, you might try central or northern Arizona or New Mexico, especially the highlands around Flagstaff. The ponderosa pine may also be found in northern Mexico at higher elevations.

If travelling by car, a number of highways offer outstanding opportunities to smell ponderosa pine. Among these are the Crowsnest Highway (Highway 3) in British Columbia, particularly between Princeton and Rock Creek, and again from Creston through Fernie. Also, do try Highway 2 in the extreme north-west of Montana (near Libby), and the Bryce Canyon National Park.

For those not travelling by car, ponderosa pine may also be found in several areas more friendly to foot or bike travellers. For example, the main campus of the University of Montana (in Missoula), features extensive ornamental plantings of the ponderosa pine, which, not coincidentally, is also Montana's official state tree.

Look for a solitary conifer with long, slim, yellow needles in bunches of three, but the real give-away is the deeply red-coloured bark. Some describe this colour as 'cinnamon', as it can be quite rich and vivid. On older trees, the bark may also have pronounced dark vertical grooves along it, similar in orientation to those found on the Douglas-fir. Several images are, of course, available online.

The cones2 are large, cute and pineapple-like.

Check the thermometer. Best results occur at temperatures above 30-35°C (about 95-100°F). Ensure that the sun is out, and that it is not overcast. Be aware, this is serious heat so take along plenty of portable fluid.

Refer to step 2, above, for a description of the ponderosa pine, and bear this in mind. For best results whether driving or walking, try to find a trail that is at a high elevation, and away from the city air (if this is a local problem).

Ponderosa pines tend to be solitary trees, and under natural conditions have little or no understorey3, forming what many have termed a 'park-like' setting. This arises from the fact that the ponderosa pine is a 'fire-dependent' species, in that it relies on frequent (5-10 years) low-intensity groundfires to kill off potential competitors and retain its dominance. Thus, no understorey. Ensure that this is a mature ponderosa pine, eg more than 60cm (2ft) in circumference.

1The name Pinus ponderosa means 'heavy pine'.2The cones contain the seed for the next generation. They are perfect food for chipmunks, squirrels and other tree-climbing species, as shown in this video.3Shade-tolerant plants which grow beneath the main canopy of a wood or forest.