Makt Myrkranna: The Icelandic Dracula Content from the guide to life, the universe and everything 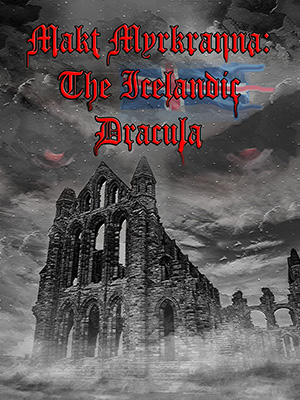 We all know the story of Dracula, right? The tale is popular, whether in the form of Bram Stoker's world-famous epistolary novel, one of the many, many horror films in cinemas and on your streaming services, or as part of Southeast European folklore. We may be convinced of a connection between Stoker's blood-sucking Count and such problematic historical figures as Vlad Tepes. Vampires fascinated readers long before Bela Lugosi took to the stage, and long after, too, so we probably think we know all there is to know about Stoker's 1897 novel1. Stoker's Dracula could be considered definitive and canonical. It set up the 'rules' of the modern vampire novel as well as outlining the classic story of 'ancient fiend meets modern civilisation (civilisation wins).'

It might therefore be a little surprising to find out that only a few years after the publication of the original novel, in 1901, an Icelandic version appeared which differs considerably from the canonical Dracula. This version was authorised by Bram Stoker, who wrote an introduction to it. The story was adapted into Icelandic by folklore scholar Valdimar Ásmundsson, who serialised it in his journal Fjallkonan (Queen of the Mountains). In 1902, the whole book was published under the title Makt Myrkranna (Powers of Darkness). It was only the second foreign version of Dracula: the first was a version in Hungarian published in Budapest in 1898.

Makt Myrkranna got only one review when it came out, and that was negative. Critic Benedikt Björnsson called it 'garbage', but he may have been jealous that his own horror translations – of stories allegedly by Edgar Allan Poe, but really by a lesser-known British writer, Amelia B Edwards – didn't get more attention. Dracula didn't really become a popular novel until the Tod Browning film came out in 1931, and Makt Myrkranna became popular after the film was shown in Reykjavik. Icelandic Nobel laureate Halldór Laxness was impressed by Makt Myrkranna.

Dracula scholarship paid very little attention to this Icelandic 'translation' until the 1980s, when somebody noticed that the two stories, though similar, differed, well, a lot. Makt Myrkranna has more characters – and it is possible that Bram Stoker had a lot to do with inventing those characters. Studies of Stoker's notes for Dracula suggest abandoned ideas that turn up in the Icelandic version. Academic researchers will be arguing about who did what to this text, when, and why, for a very long time. We could just enjoy both stories. Here's a brief comparison of the two tales.

It seems to me that the further east you go the more unpunctual are the trains.
- Jonathan Harker, in Dracula, p3

Before they can chase the Transylvanian prince out of England, a clueless Englishman has to go to Transylvania. The first part of Dracula is a supposed shorthand diary kept by Jonathan Harker, solicitor, who is in the Carpathians to help settle the affairs of Count Dracula, so that the Count can move to England and 'share its life, its change, its death'. At first, Harker is full of touristy delight, collecting the recipe for Paprikahendl and looking down his nose at the superstitious foreigners, but by page 50, he's ready to climb down the castle walls, even though he may die – which seems likely, since the fortress is on a high rock. The Count has left Harker behind while he goes to England, and Harker is afraid of being devoured by the Count's 'brides'. The narrative breaks off there.

The next part of the book is presented in the form of diaries, letters, memos, telegrams, and even transcripts of wax cylinders, all by characters in the story. Mina Murray, soon to be Harker, visits Whitby in North Yorkshire with her friend Lucy Westenra, who is there for her health. She needs her strength: Lucy receives three marriage proposals in one day. She accepts the English aristocrat, but the psychiatrist and cowboy are good sports about it, and they all remain friends.

Unfortunately, a ship full of dead Bulgarians arrives, bringing Count Dracula. The Bulgarian sailors are dead because Dracula, who was peckish, killed them all on the journey. Finally, the ship's captain lashed himself to the tiller, where he is found, also dead.

Mina Murray, meanwhile, has heard from Jonathan, who somehow survived Dracula's castle and is recovering in Budapest. She goes to be with him, marries him, and catches up with the story. They return to help van Helsing and the others deal with the Transylvanian menace.

Dracula invades Dr Seward's asylum by promising immortality to one of the inmates, named Renfield. (He doesn't keep his promise.) Once inside the building, Dracula bites Mina and puts her under his spell. The vampire hunters retaliate by polluting all of the Count's crates of Transylvanian soil with holy wafers. Frustrated, Dracula hops the next ship back to the Black Sea.

A hot pursuit ensues, as the vampire hunters fear that if they don't succeed in destroying Dracula, Mina will become a vampire upon death. After a mad overland chase, the heroes open Dracula's coffin just as the sun is setting. Result: one dead and dusted vampire, and the end to a very engaging story.

Variations of this tale have been played out on stage and screen for most of the last 100 years. But what about Makt Myrkranna?

The Powers of Darkness Try to Take Over Europe, But Are Easily Foiled by the English

Folklore recognizes many things that science knows nothing about, or which scientists deny.
- Makt Myrkranna

The first part of Makt Myrkranna is a remarkably faithful version of the Jonathan Harker story: Harker, here named Thomas, visits the castle and becomes trapped by the wily Count. This section is even longer and more detailed than in Dracula, and includes a new character: instead of the 'brides', there is one woman, mysterious and beautiful. She seems to be determined to seduce Harker, though he resists. At first, Dracula passes her off as his mad niece, who is convinced she is the reincarnation of a famous family beauty from the past. We, the readers, are convinced otherwise, and believe she is an undead siren locked in a centuries-old love-hate relationship with the Count. After much running about in the castle, the Count abandons Harker to his fate. The first-person narrative breaks off in the predictable place.

In Makt Myrkranna, Harker appears even more clueless than in Dracula, and he finds the mysterious lady more attractive than Jonathan found the 'brides'. In all, the Transylvania section of the Icelandic work takes up 37,200 words – a 63% increase over Dracula. In contrast, the rest of the story is reduced from 137,860 words to 9,1002.

After this long opening section, Makt Myrkranna departs considerably from the text of Dracula. The epistolary format is abandoned entirely in favour of a third-person narrative which reads like an expanded synopsis of the rest of the plot. We are told about Mina, here called Wilma, and Lucy, now Lucia Western, and their adventures in Whitby. Count Dracula shows up in England at the head of an obscure European cabal bent on world domination. They hold satanic rites with blood sacrifices, which we had also seen in Transylvania. The police get involved. The vampire hunters find Dracula in his lair by daylight, and destroy him. A number of diplomats are recalled by their embassies, and the rest of the scandal is hushed up. The ending is altogether more thriller-like and less emotionally satisfying than Dracula.

How to Enjoy This Book

Dracula has been much like a family recipe, shared among storytellers and handed down with each passing generation who add or leave behind in its scene a little something of itself.
- John Edgar Browning, afterword to Makt Myrkranna

It is not necessary to read Icelandic in order to enjoy Makt Myrkranna in all its glory. Just read the 2017 English translation. This edition is very academic, and has been painstakingly translated by an international team of specialists, including a number of native-speaking Icelandic scholars. The footnotes are copious and informative. Questions of Stoker's involvement in the work, the influence of Icelandic sagas and other folkloric materials, and explorations of the various themes and memes in the two novels will keep researchers busy for the next half-century, no doubt. You can still enjoy the tale as yet another version of the Dracula myth.

This translation will probably inspire even more filmmakers to take on Dracula. Whether the new versions include geopolitical trivia or stick to the bloodsucking and bodice-ripping formula remains to be seen.

1Despite a widespread belief that Dracula was the first vampire novel in the English language it was preceded by John Polidori's The Vampyre (1819), inspired by an unfinished tale by Lord Byron as part of the ghost story competition that resulted in Mary Shelley writing Frankenstein; or the Modern Prometheus (1818). Vampires were an English literary and dramatic staple throughout the 19th Century. James Robinson Planché's play The Vampire, or, The Bride of the Isles premiered in London in 1820. James Malcolm Rymer's Varney the Vampyre was serialised between 1845 and 1853, as was Sheridan Le Fanu's Carmilla in 1872.2These figures are from HC de Roos' introduction to the 2017 edition of Makt Myrkranna.