Varney the Vampyre, or, Penny Dreadful Gothic Content from the guide to life, the universe and everything 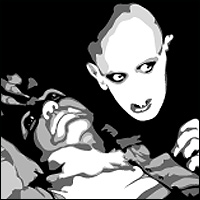 How graves give up their dead, And how the night air hideous grows with shrieks!
- Varney the Vampyre

Long before Buffy, long before Dark Shadows, and even before Dracula, there was Varney the Vampyre. In the absence of television, radio and film, the cheapest of cheap paperbacks, the penny dreadful, provided mass culture with this icon of evil and delicious, shuddering horror. In the mid-19th Century, this was as exciting as literature got. Varney ran into three serials, and a reprinted novel of over 200 chapters. Sir Francis Varney, accursed and repentant aristocratic vampire, joined fellow pop-culture characters Sweeney Todd and Spring-Heeled Jack as imaginative fodder for young and old alike, raising questions in the minds of elitists and reformers as to the advisability of the newly widespread literacy.

To the whole of the Metropolitan Press for their laudatory notices, the Author is peculiarly obliged.
- Varney the Vampyre, Preface

With the 19th Century increase in literacy came the rise of new media. Originally called the penny blood, or 'Blood and Thunder', the penny dreadful offered eight pages, often arranged in double columns, of serialised sensational fiction for a penny. Its roots in the Newgate Calendar, which carried crime stories, the penny dreadful specialised in episodes of violence and horror, often venturing into subject matter that later generations would call urban legend.

The stories were accompanied by lurid illustrations aimed at 'spicing up' the content, and making it more attractive to readers.

Contemporary commentators and would-be social reformers, such as James Greenwood, in Seven Curses of London (1869), considered these publications a bad influence on the young. Penny dreadfuls were popular with young people, not only because of the subject matter, which was always attractive to teenagers, but also because there was little or no literature at the time specifically aimed at young readers.

Whether or not it was good - and the penny dreadful was often dreadful in more ways than one - being deliberately 'written down' for a semiliterate mass audience, it was popular. Many of the authors recognised as masters today, such as Wilkie Collins, Charles Dickens, and Bram Stoker, were well acquainted with the penny dreadful, which can be counted among their literary influences.

With Varney the Vampyre, or The Feast of Blood, the popular serial opened up new territory, that of Gothic fiction. The penny dreadful had gone supernatural.

Varney the Vampyre, or The Feast of Blood

The following romance is collected from seemingly the most authentic sources...
- Varney the Vampyre, Preface

One publisher of penny dreadfuls, E Lloyd, employed a stable of writers, whose works often appeared without attribution, or advertised as 'By the author of [Last Published Successful Story]'. For this reason, it is impossible to state categorically which of them wrote Varney. The author was long believed to be Thomas Peckett Prest (1810 - 1859), but recent style analysis has given the title to James Malcolm Rymer (1814 - 1884).

Prest, incidentally, wrote The String of Pearls, the original story on which the Sweeney Todd material is based. Rymer's other works include The Black Monk, Flight of the Vampyre, Coming of the Second Vampyre, Fate of the Vampyre, Manuscripts from the Diary of a Physician (a slight departure here), and, no surprise, Bride of the Vampyre.

The Tale of Varney

'God help us!' ejaculated Harry.
- Varney the Vampyre, Chapter One

Sir Francis Varney, 18th Century English aristocrat, is hanged for the murder of his own son. Revived by a medical student, Varney becomes a vampire, sustaining himself from the blood of the living. Essentially immortal, he can be revived by the touch of moonlight. Although frightening in aspect, Varney exerts a powerful sexual attraction on his female victims.

The story abounds in the sort of settings and events we have now come to expect from a vampire tale, castles, graveyards, stately homes, storms, encounters with the monster by night, riots, and plots. Varney is the kind of vampire we have since come to know and love; mysterious, powerful, but also nobler than many of the more ordinary villains of the story, suffering from romantic self-loathing.

The style is surprisingly breezy and, although full of Gothic forebodings and atmospheric descriptions, remarkably modern in its succinctness. The story moves from plot to plot in short, snappy chapters. As the idea of the 'cliff-hanger' ending had yet to be invented, the instalments sometimes end abruptly. The whole story has something of a soap opera quality; plots often become so convoluted that the threads are lost.

The remorseful Varney attempts suicide by drowning, but is once again revived by moonlight. Finally, in chapter 237, in a bid to end his unendurable existence, he throws himself into the crater of Vesuvius.

Before...the guide could utter anything but a shriek, Varney took one tremendous leap, and disappeared into the burning mouth of the mountain.
- Varney the Vampyre, Chapter 237

Although in 1846, at the height of its popularity, Varney was performed as a play, the staying power of the story, like that of so many penny dreadfuls, has been less in its status as a classic than in its influence on the works that came after it.

Long unavailable in print, except to collectors, Varney can now be found in paperback, or accessed as an e-book on a number of sites, including the University of Virginia's Electronic Text Center.

Though the style may be a bit out of date, Varney the Vampyre, or parts of it at least, can still be worth a read for a glimpse into the pop culture of yesterday, and a look at the origin of the motifs that still fascinate us today.

...the Author must leave the question of credibility entirely to his readers...
- Varney the Vampyre, Preface