An Actor, a Chorus Girl, and a POW Sneak into a Country: Tales of Illegal Immigration in the USA Content from the guide to life, the universe and everything 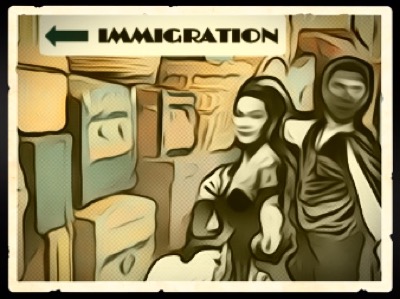 Give me your tired, your poor,
Your huddled masses yearning to breathe free,
The wretched refuse of your teeming shore.
Send these, the homeless, tempest-tost to me,
I lift my lamp beside the golden door!
– Emma Lazarus, 'The New Colossus', poem inscribed at the foot of the Statue of Liberty in 1903 and later set to music by Irving Berlin.

..If we heere be a corporation established by free consent, if the place of our cohabitation be our owne, then no man hath a right to come into us without our consent... If we are bound to keep off whatsoever appears to tend to our ruine or damage, then may we lawfully refuse to receive such whose dispositions suite not with ours and whose society (we know) will be hurtful to us.
– Governor John Winthrop of Massachusetts, 'A Defence of an Order of the Court', 1637

Somewhere between these two documents lies the history of immigration to the United States of America, notably a land of immigrants. As the 1637 statement by John Winthrop would indicate, even in colonial North America, the European settlers had rules about who could, and who could not, legally get off the boats. In the second half of the 17th Century, all New England colonies except Rhode Island (a hotbed of liberals) had laws in place to prevent dangerous religious radicals – ie, Quakers  – from landing on Puritan soil. In 1700, Massachusetts barred 'lame, impotent, or infirm persons' from entering the colony. In 1717, Pennsylvania required loyalty oaths from German immigrants. When the country officially got started, the 1790 Naturalization Act extended the privilege of new citizenship only to 'free white persons' of 'good moral character'1.

During that same colonial period, of course, thousands of unwilling immigrants, both black and white, were being kidnapped and forced across the Atlantic to work for the 'free white persons'.

In spite of periodic panics about the threats from abroad uttered by those who are already there, illegal immigration has usually been a manageable problem, even during the immigration peak in the 1890s-1910s. The trick is to vet the immigrants and make the legitimate ones legal. To accomplish this, the government built processing stations such as the big one at Ellis Island. About 12 million people came to the US through Ellis Island – legally – between 1892 and 1954.

During the peak years, there was a port-by-port quota system for 'less desirable' aliens, such as Jews, Italians, or Slavic people. As each port's quota system filled up, ship captains would go further afield. When US ports got full, those seeking a new home sometimes moved to Canada. More than a few of these temporary Canadian residents found it convenient to take a stroll across the Rainbow Bridge at Niagara Falls – and make it a one-way trip.

A sign of how much damage was done by this illegal immigration is the fact that during World War II, local authorities in New York State commonly went around to the homes of elderly Italian Americans, and made sure they 'got legal', lest someone accuse them of spying for Mussolini.

With all of this immigration history, it is small wonder that the issue pops up in every major election year in the United States. Politicians garner votes by attacking opponents who are 'soft on illegal immigration'. Those same opponents are forced to take a crash course in immigration law if they want to defend their more open policies. And so it goes. The issue can be perplexing to those from other countries, whether they're planning to come to the United States or not.

In view of the frequently-made assertion that illegal immigrants pose a threat to security, it might be instructive to examine a few documented stories about undocumented aliens.

The year: 1920. The place: Not the rocky seacoast of Whitby2. Instead, it was steamy New Orleans. The illegal immigrant? One Béla Ferenc Deszö Blaszkó, formerly of the Austro-Hungarian Empire, when there was such a thing. A trained actor, former captain in the Austro-Hungarian ski patrol, and leading man in Hungary and Germany, Blaskó was currently a temporary merchant seaman. But he wanted to act, and he wanted to be an American, so he jumped ship in the Big Easy and headed north to Broadway. After a few months, however, he found out it was relatively simple to become legal. So he presented himself to the authorities at Ellis Island, New York City's clearinghouse for wretched refuse. After passing inspection – diseases, none, mental illness, no, he's just Transylvanian, got a job, yes, want to overthrow the government, why would he do that? – Bela Lugosi (named for his home town of Lugoj) was a legal immigrant.

Just in time for his breakout Broadway role: The Devil in the Cheese3. Ha! You thought it was Dracula, admit it.

Bela Lugosi was an asset to US filmmaking, from his classic horror roles to his patriotic appearances on behalf of blood banks, and even to his last great gift to film history, Plan 9 from Outer Space.

Beauty from Across the Border

Actress Yvonne De Carlo was described as 'the most beautiful girl in the world' by producer William Wanger when he picked her to play Salomé. But a couple of years before, the exotic beauty (part Sicilian, part Scots), had been deported... to Canada.

Fortunately Yvonne (neé Margaret Yvonne Middleton) succeeded in recrossing the frontier legally, and the rest is film and television history. Just think: they almost kept Lily Munster out of the country.

During World War II, a fair number of German soldiers ended up in US POW camps. Not all of them were Nazis. Some were, in fact, quite likeable human beings with a sense of humour and a healthy dose of imagination. Such was Reinhold Pabel. He had been captured in Italy, and now was in a POW camp in the Midwest. Pabel, an outgoing, educated young man who made friends everywhere he went, liked the US farmers he worked for – they always set a good table. But the war was over, and still the POWs were not sent home. Some of them harboured the not unnatural suspicion that the Americans might keep them around until the interstate highway system was finished.

Pabel decided to escape, although as previously mentioned, the war was already over. He made his way to Chicago, that toddlin' town, and got a job as a dishwasher in a restaurant. When it turned out he needed a Social Security number (due to FDR's creeping socialism), he nearly panicked. But it turned out that getting a Social Security card was as easy as pie in those days when many people had no birth certificates. He just went to the office and, well, lied a lot. He got his name – Phillip Brick – from a calendar on the wall (shades of Keyser Söze). Brick lived happily in Chicago as the owner of a bookshop. He even married. And then disaster struck in 1953: two FBI agents walked into his shop.

Brick and his lawyer argued that technically speaking, he hadn't actually entered the country illegally. In fact, he'd been brought on a troopship. That cut no ice with the Feds, although the general public was more sympathetic. After all, the man was well-liked, paid his taxes, and had a family. After negotiations, Pabel was sent home to Hamburg for six months, then allowed to re-immigrate legally. The family stayed in the US until 1965, when Pabel took them to Hamburg with him and opened a bookshop there. He died there in 2008.

No matter what new laws are passed, immigration will continue to be a campaign issue. People in the United States are interested in immigration because unless they are 100% Native American, they have an immigration story in their family. (And if they are Native Americans, they probably have their own opinions about immigration policies, and when they should have started.) The further back their ancestors' immigration stories lie, the more likely they may be to criticise more recent immigrants. The names of the groups may change, but the feelings that 'they' are here to steal our jobs and get up to mischief has been around since at least 1637.

But immigration stories are about individual humans, which means that they will include the good, the bad, and the in-between. The Golden Door opens wide enough to let all sorts in.

Reinhold Pabel wrote a book about his experiences called Enemies Are Human (Winston, 1955). Unfortunately, it is not available online, though it may be purchased. Here is a well-written article about Pabel that explains why so many US citizens were willing to go to bat for him in 1953.

Enjoy a slide show of Lugosi posters to appreciate the actor's versatility.

Go and appreciate more stories about legal (but sometimes confused) immigrants at the Ellis Island website. As Barack Obama said, 'You know, unless you're a Native American, somebody brought you here... And not everybody had their papers straight when they came4.'

1These and other fascinating legal quotations can be found at ProCon.org's historical timeline of legal and illegal immigration to the United States.2In Bram Stoker's novel Dracula, the Count arrives (as a stowaway in a coffin) aboard a sailing ship from Varna, which crashes into the Whitby coast in Yorkshire due to the vampire's overactive appetite on the voyage. He'd been snacking on the crew. Of course, Count Dracula (again, in the novel) bought property legally in the UK, which made him not only a legal immigrant, but an example of another social problem: foreign ownership of real estate. Possibly in revenge for this fictional portrayal of one of his ancestors, the UK's Prince Charles now owns and rents out classy tourist accommodations in Transylvania.3The Devil in the Cheese ran for 157 performances in 1926-27. Written by Tom Cushing, the play is set in Greece – and also inside a young woman's head. There's a gorilla in the play as well as a mummy. The New York Times critic was kind enough to say of Lugosi that he 'acts with an authority and cadence worthy of better things.'4Remarks at a campaign speech supporting Hillary Clinton, 5 July, 2016.