Niagara Falls - A Wonder of Canada and the United States Content from the guide to life, the universe and everything 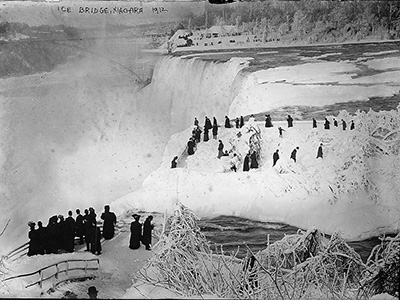 Much of the eastern border between the United States and Canada is divided by a series of large, fresh-water lakes. Known as 'The Great Lakes', they were formed and filled by glaciers retreating at the end of the last 'Ice Age' about 12,000 years ago. The two easternmost lakes, Erie and Ontario, are connected by the Niagara River. The water level of Lake Ontario at 243 feet (74 metres) is much lower than the surface of Lake Erie at 571 feet (174 metres). Near the midpoint of the river, the water plunges over a sheer cliff of nearly 160 feet (49 metres) in three impressive cascades – the Horseshoe, Bridal Veil and American Falls.

The top of the falls are formed by a layer of limestone with a high content of magnesium, often called 'dolostone'. This type of sedimentary rock is highly resistant to erosion, however the underlying shale rock is quite soft and and can be easily worn away. This ridge of rock, or escarpment, stretches from mid-state New York, around the northern shore of Lake Eire and Huron. It then turns south and ends about halfway down the western shore of Lake Michigan.

As the underlying shale is worn away, the limestone becomes unsupported and eventually it breaks away, falling into the chasm below. The falls have slowly moved upstream over the centuries, and in several thousand years they will reach the lake at the source of the river and the falls will cease to exist. The cap rock of the escarpment slopes downward as it approaches Lake Erie. When the rock has eroded below the surface level of the lake, the falls will be replaced by a series of rapids as they continue the fall in height to Lake Ontario. By most estimates you still have at least 15,000 years to plan your vacation.

Danger and Allure of the Falls

The Niagara River flows north from the city of Buffalo, New York. As with any major waterway near a large city it is a popular destination for recreational watercraft. The river has a current of about 17 mph (27kph). Any boat that suffers mechanical failure or negligent operation risks the fatal plunge to the bottom of the gorge. As the river narrows, the current increases.

The falls have also attracted thrill seekers and daredevils who have attempted to challenge the falls in a variety of contraptions ranging from barrels to custom designed spheres, as well as tight-rope walking. Many have died in the attempt, and the few survivors risk arrest for reckless behaviour. The only section of the falls where this is even possible are the Horseshoe falls, as the American falls have a large area of rocks at their base.

Ship traffic is diverted through the Welland Canal that cuts through the escarpment to the west (Canadian side) of the falls. First completed in 1825 the original canal has been enlarged and improved over the years. With the opening of the St Lawrence Seaway in 1959 the Great Lakes were linked to the open ocean. Ships can now pass from any of the lakes to ports around the world.

The first hydro-electric plant built to harness the power of the falls was officially opened in 1897 by Nikola Tesla and George Westinghouse.

As the local population has increased over the years, with a growing demand for electric power on both sides of the border, an interesting balance of industry and nature has emerged. On the American side the turbines that power the dynamos by day are converted to pumps at night to force millions of gallons to reservoirs above the site each night. On the Canadian side the water above the falls is diverted into similar reservoirs for release of the water through the turbines when the electric demand is the greatest, without disrupting the flow of the river while the tourists are watching.

Although the falls are located far enough north to see freezing temperatures every winter, the flow of the water is seldom disrupted by ice. It has been recorded that once, on 29 March, 1848, an ice jam in the upper river caused the waters to cease their flow. In most years an impressive 'Ice Bridge' is formed below the falls by the moisture thrown up by the falling water. The unexpected breaking of the 'Ice Bridge' in 1912 cost the life of three tourists and resulted in the ice being placed off-limits since. The power companies place a large chain over the mouth of the river to capture floating ice from the lake, preventing it from interfering with the turbines.

In 1969 the flow to the American falls was purposely disrupted by a temporary dam to address the erosion issues and to consider aesthetic improvements. After several months of inspection the dam was removed and the falls restored without any significant modifications.

For many years the Falls were considered to be the ideal honeymoon destination for newlyweds. Today they cater to all tourists, including casinos, museums and family friendly attractions.

The Maid of the Mist

The Maid of the Mist is any one of several tour boats, each designated by a Roman numeral after the name. The various boats leave from a landing, downstream of the falls, from either the Canadian or US sides of the river. They motor upriver close to the Horseshoe falls where the passengers can feel the force, and hear the roar, of the cascade. Bright blue plastic raincoats are provided to minimize the inevitable soaking in the mist that surrounds the falls.

The name Maid of the Mist is inspired by the legend of an Indian Princess who allegedly met her fate by going over the falls. At Niagara, however, most accounts have her plunging over the edge in her canoe. She's then rescued by the 'God of Thunder' who lives in a cave behind the Horseshoe falls. From her refuge she overlooks the countryside and is wed to either the god himself, or to one of his sons. She watches over her people, and protects the visitors, especially while they are spending money.

The Cave of the Winds

This tour allows you to take a lift down into the gorge and walk to a platform a mere 20 feet (6 metres) from the torrents of the Bridal Veil Falls. Until 1920 the tour terminated in a small cave behind the falls, formed by the erosion of the shale below the cap rock. A partial collapse of the ceiling proved that area was too dangerous for any future tours. The visitors here are also supplied with disposable rain gear to protect them from the mist of the falls. High winds approaching hurricane strength are generated by the speed of the falling water.

The island that separates the American and Canadian falls was a farm and mill site in the 18th Century. The miller kept a large herd of goats which all perished in the severe cold in the winter of 1780; the island in named in their honour. The island is also noted for its vegetation, many attribute the lush growth as a result of the moisture provided by the mist of the falls.

This bridge allows pedestrians, bicycles and automobiles to cross the border between Niagara Falls, New York and Niagara Falls Ontario1. The bridge passes high above the river, which has a current of almost 25 miles per hour (40km/h) in the gorge below the falls.

A short distance below the falls the river makes a tight turn, the current forms circular rapids at this point which produce some of the highest waves in North America. The whirlpool can either be experienced on the water in a jet-boat tour, or viewed from above in a cable car.

Although the most visually obvious features are the man-made attractions, the true wonder is that of the falls. There's also the natural vegetation, and the wildlife that passes through the area.

Niagara Falls in Film and the Edited Guide

The falls were mentioned in one of the original, mostly harmless, Entries here, in the Edited Guide: They. Unfortunately, it really is against the law to ride an elephant, or anything else over the falls. (We have no plans to update this Entry - Eds.)

The Golden Horseshoe is a local name for the area of Ontario, Canada surrounding the western end of Lake Ontario, including the falls area.

One of the most memorable introductions of the falls was the 1953 film of Marilyn Monroe,   Niagara, in which she played a bride with a desire to kill her husband.

Niagara Falls provided an important back-drop for the 'honeymoon'2 of Clark Kent and Lois Lane in the film Superman II, though later scenes from Superman's fortress at the North Pole steal the show.

The comedy film Canadian Bacon by Michael Moore produced in 1995 centres around the Niagara gorge and falls.

The Rivalry of the Falls

Both Canada and the United States take pride in the falls as a 'Wonder of the World'. Canadians proudly point out that it is only from their side that all three of the falls can be fully viewed. The Americans counter that only on their side can a visitor stand close to all three. For a comprehensive visit you should be sure to include a border crossing or two.

Visiting Niagara Falls is certain to leave a long lasting memory, however you really should leave your barrel at home.

Image supplied by the Library of Congress
1Not to be confused with the town of Niagara on the Lake located to the north where the river meets Lake Ontario, near the start of the Welland Canal.2In the story line it was only a sham to allow them to investigate local corruption for their newspaper, The Daily Planet.