'I'm Walking Backwards for Christmas' - the Song Content from the guide to life, the universe and everything 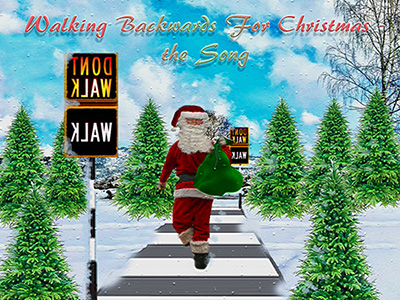 Every now and then a Christmas song is recorded that fully captures the spirit and ethos of Christmas, that evokes peace on Earth and the reverend awe of the concept of an almighty Creator being on Earth in the form of a newborn, precious baby. 'I'm Walking Backwards for Christmas' (1956) is not that song. It is, however, a song about someone walking backwards for Christmas across the Irish Sea in the pursuit of true love, and one of the few Christmas songs (as opposed to carols) in the UK to have been recorded before the 1970s or 1980s.

'I'm Walking Backwards For Christmas' is a song by the Goons, the stars of Britain's phenomenally popular and revolutionary radio comedy series The Goon Show. These madcap episodes all had ludicrous plots with surreal, nonsensical humour and starred Spike Milligan, Harry Secombe and Peter Sellers, with Michael Bentine appearing in the very first episodes. 250 episodes of The Goon Show were broadcast between 1951 and 1960, with two specials in 1970.

Many a Christmas song has been inspired by world events, and 'Walking Backwards for Christmas' is no exception. Just as the minor inconvenience of the threat of total nuclear destruction and the obliteration of all life on Earth during the Cuban Missile Crisis would later inspire 'Do You Hear What I Hear?', 'Walking Backwards for Christmas' was inspired by disaster on an even greater magnitude: the 1956 Musicians' Strike.

Struck by a Striking Streak

In the 1950s the BBC was one of the world's largest employers of musicians but was also under pressure to play more records of contemporary music, while recent breakthroughs in technology made it possible for the first time to record radio broadcasts and potentially retransmit them, rather than every radio show needing to be broadcast live. In early 1956 it was involved in three-way negotiations with the Musicians' Union and copyright-licensing society Phonographic Performance Limited (PPL). The Musicians' Union wanted to restrict the amount of needletime – the amount of recorded music that the BBC could play – in favour of live performances by its members. Yet any deal also had to be agreed by PPL, who were acting on behalf of the UK's record companies that owned the copyright of the records that the BBC wanted to play. This was made more difficult as the record companies themselves were divided between those who believed that over-playing records on radio would reduce record sales and others who believed that the more records were played the greater the sales would be.

Overall PPL were keen to promote the increase of needletime as they collected the licensing fees raised when records were played. The agreement established in 1952, restricting the BBC to no more than 22 hours' total needletime on UK national radio1 and three hours on television, had expired on 31 December, 1955. After some negotiation this was continued until October 1957. In November 1956 Parliament passed the 1956 Copyright Act, which introduced cover regarding the rights involved in recording a radio and/or television broadcast.

As comedy was seen to have evolved out of the music hall tradition, comedy shows were expected to have one or more musical breaks. The Goon Show was no exception. During this era it typically had two musical breaks per episode as well as live-played background music to set the scene and for dramatic emphasis. At the time these were normally provided by Max Geldray (1916-2004), the world's first jazz harmonica player, and the Ray Ellington Quartet.

'Walking Backwards for Christmas' first appeared in the Goon Show sixth series episode 'The Great Tuscan Salami Scandal', in which Ned Seagoon must find a way to avoid war with the other side of the Spaghetti Curtain by locating the missing breeding pair of ground-to-ground salami fitted with warheads2. This episode had been recorded in February 1956 during the Musician's Strike.

To Prove My Love For You: The Broadcast Version

If necessity is the mother of invention, insanity is the half great-aunt-in-law of desperation. Something needed to be done to plug the musical interlude gap or the episode would be broadcast with silent 'dead air'. When it came to music, the Goons did have a secret weapon; however, this was a dud. Harry Secombe, having the lungs of a Welshman, the face of a gasping cherub and the lips of a raspberry-blower, had spent 12 years training to be an opera singer and was an official bel canto tenor, or 'can belto' as he insisted. He had already had a Top 20 hit under his considerable belt the previous year, and would later go on to have more hits, reaching number two in 1967. He appeared in musicals, was nominated for a Tony award and appeared in Oliver! (1968), the multi-Oscar-winning musical. His voice was so beloved by all who heard it that Spike Milligan, when he heard of Secombe's death in 2001, said: 'I'm glad he died before me, because I didn't want him to sing at my funeral'. However, Secombe was under contract with Philips Records and unable to sing for the BBC or other record companies.

Spike Milligan was also a musician, having begun his career as an entertainer by playing trumpet and guitar. He quickly composed a short song to fill much of the gap, with extra nonsensical dialogue helping to fill in the sides. The original version of the song is only about 50 seconds long and ends with the words 'To Prove My Love For You'.

Adolphus Spriggs: The Voice of Mediocrity

A new Goon Show character, Adolphus Spriggs, a non-playing musician, was created for the song. Played by Spike Milligan, he performed all the orchestral links vocally. For example, he said 'Bum, bum, bubububumm' at dramatic moments in the plot. He appears along with his agent, Lew3 who introduces Spriggs by describing him and his song as:

...a beautiful boy singer 'ere. 'E's got a song, you never 'eard nothing like it in all your natural. It's a marvellous new wonder song, it's straight from me own County Down in the old Ireland. Melody, of feelin', pathos, Samos, Guernsey, Rockall and Sark. Oh, I'm referrin' to the old Graham Sark4 of course. This boy 'ad 'is tonsils specially sprayed with Footo, the Wonder Boot Exploder... 'E's dead keen this boy, dead keen. North Korean Johnnie Ray, I'm not kidding. Never put a tonsil wrong.

After performing the song Adolphus promises to walk backwards while singing the song at the same time, at no extra charge, only to promptly fall off the stage and die. He never appears in The Goon Show again, although similar character Jim Spriggs would5.

It's Just a Publicity Stunt?

The song proved an incredible hit with audiences, who preferred Sellers' atonal accompaniment, in which he plays the piano to the same musical standard as someone playing a prank, to a performance by professionals. Seeing a demand, and hoping to expand in new directions, the Goons signed a deal with the record company Decca6.

To Prove That I Love You: The Recorded Version

As the song had proved popular Decca were keen to release it, yet it needed to be slightly longer than 50 seconds. A verse of backstory was added. This explained that the main character was a spurned Irish 'immigrantal lad' in love with an Irish gal from Galway Bay. He hears an atonal heavenly choir and so walks backwards across the Irish Sea, with his attempts to walk normally or sideways across the sea considered to be purely 'a publicity stunt'. Only by walking backwards for Christmas can he, as the final words now say, 'prove that I love you'.

'Walking Backwards for Christmas' was their first recording to be unleashed in shops to royalty and the general public alike. This song was rushed into shops so quickly that Peter Sellers didn't even have a chance to change his wife. The B-side was called 'Bluebottle Blues' and features the Goon character's attempts to explain how much he doesn't like being killed or 'deaded' in every episode. He also comments on the A-side, too:

Bluebottle: 'Ere, I didn't think much of that. I think my side was better.

An orchestra was also added, even though it was the lack of an orchestra willing to play that had led to the song's creation in the first place. Released in the UK in June 1956, the record reached the dizzying heights of number four in the charts, which works out as one place for each of both Peter Sellers and Spike Milligan's legs. To this day it remains the UK's most successful song containing the word 'Christmas' released in June. The song was considered so good that Decca's US subsidiary London Records decided to release the single a month later, but it didn't have the same impact with US audiences. The Goons would follow this hit with more musical success, particularly 'The Ying Tong Song' which reached #3 later that year.

1Ten hours on the Home Service, ten hours on the Light Programme and two hours on the Third Programme.2See earlier comment about surreally absurd nonsensical plots.3Loosely inspired by dancer, agent and television and film mogul Lew Grade who built a media empire selling British television programmes to America, such as The Prisoner, Thunderbirds and The Muppet Show.4Actor and comedian Graham Stark [sic] served in the army alongside Peter Sellers, would be his best man at his weddings, and appeared in many of Sellers' films, including seven Pink Panther films. When Spike Milligan or Peter Sellers were ill he would often play some of their characters. Guernsey and Sark are two of the Channel Islands.5Is Jim Adolphus' brother, or had Adolphus changed his name to Jim to get into showbusiness? Either explanation is overthinking it.6They had, in 1955, recorded a cover version of 'Unchained Melody' for EMI, only for EMI to refuse to release it, quickly followed by the Goons leaving EMI. The Goons' 'Unchained Melody' would eventually be released in 1990 after Goon-fan Paul McCartney bought the rights to the song, having earlier survived Peter Sellers' unique interpretation of 'A Hard Day's Night'.