Do You Hear What I Hear? Pray for Peace Content from the guide to life, the universe and everything 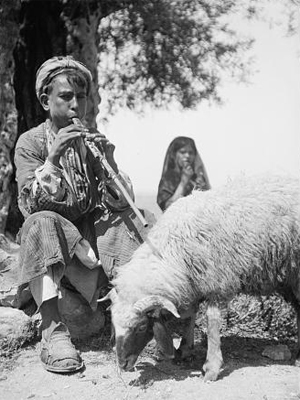 Said the night wind to the little lamb,
Do you see what I see?
– Noel Regney, 'Do You Hear What I Hear?'

What was it Noel Regney saw in October 1962? Two babies smiling at each other. Why was this unusual? Nobody else in New York City was smiling that month: they were afraid the world would end because of the Cuban Missile Crisis. Regney said, 'En route to my home, I saw two mothers with their babies in strollers. The little angels were looking at each other and smiling. All of a sudden, my mood was extraordinary.' The composer went home and wrote down the words to the Christmas song the publisher had asked him to write.

Normally, Regney – a classically-trained composer – would have been writing the music. It was his wife, Gloria Shayne, who took care of the pop lyrics in the family. She'd had a hit in 1961 with 'Goodbye, Cruel World', a novelty song sung by James Darren1. This time, however, Gloria heard trumpets in her head as she walked the streets of terrified New York. A new Christmas classic was born. The smiling babies became a little lamb. The night wind brought the news of the Christ Child. A king, somewhat ahistorically2, told everyone to pray for peace. Peace was definitely on everyone's mind in 1962.

'Do You Hear What I Hear?' became a huge hit the following year when Bing Crosby recorded it. If Bing liked it, it must be good. Many other artists recorded the song. Choirs sang it. Regney's personal favourite was by Robert Goulet because he nearly shouted the words: 'Pray for peace.'

So far, so inspiring: a couple of songwriters turn their fear into hope. But the story is more meaningful if you know where Noel Regney was coming from. He'd made a long journey to New York City.

Noel Regney must have prayed for peace a lot in his lifetime. His birth name in his native Strasbourg was Léon Schlienger. ('Noel' is 'Léon' backwards; 'Regney' is 'Schlienger' backwards, with a bit cut off.) He grew up Catholic and bilingual (Alsatian German and French). In 1940, the Germans invaded. Along with a lot of his neighbours, he ended up in the German army, much against his will. He didn't want the Germans to win their war, so he secretly worked for the French Underground.

Once, Regney intentionally led his unit into a partisan trap. Regney was shot by the ambushers, probably to keep him from falling under suspicion. He couldn't let the Germans win, but by working for the maquis, he found himself betraying his fellow soldiers. This was a terrible position for an ethical man to be in: after a while, he deserted and spent the rest of the war with the French Underground. The Second World War turned into the Cold War, and he was musical director of the Indochinese Service of Radio France. He also worked as director of a Paris nightclub. In 1951, he went on a world tour as musical director for French singer Lucienne Boyer, and then settled in Manhattan in 1952. He wrote commercial jingles and did arrangements.

One day, the immigrant composer walked into the dining room of a Manhattan hotel, where he saw a beautiful woman playing the piano. Her name was Gloria Shayne. They got married less than a month later, and became a writing team. They wrote hits and had a daughter together. In 1962, they worried about the Missile Crisis together. And when they had managed to write 'Do You Hear What I Hear?', they both choked up and couldn't sing it all the way through. They left that to Bing Crosby, Perry Como, and a host of other singers who made the song famous at Chrismastime.

The marriage didn't last, but the music did. Both partners wrote well-known songs on their own and with others. Noel Regney is responsible for the English-language lyrics to that 1963 sensation, 'Dominique', by the Singing Nun3. Their music covers a multitude of topics: love, loss, rainy days, and even more Christmas songs. But the one for which they will most likely be remembered the longest is 'Do You Hear What I Hear?', because every time it is sung, there is a prayer for peace.

A song, a song, high above the tree,
With a voice as big as the sea.
– Noel Regney, 'Do You Hear What I Hear?'

1James Darren later became famous as lounge singer Vic Fontaine on the space station Deep Space Nine.2Before anyone asks: in the Biblical account of the Nativity, King Herod is so distraught about the birth of a rival that he commits mass murder.3If you were alive in 1963 you may remember this song. If you weren't, you don't, and you should be grateful.