Sexy Abe Lincoln: A Twitter History Lesson Content from the guide to life, the universe and everything 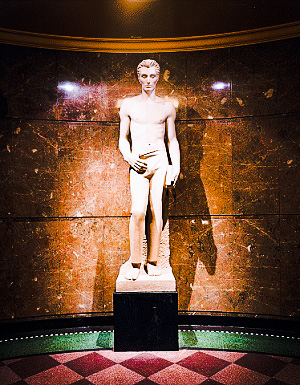 Public art: laudable application of public money for beautification, commemoration, and edification? Or source of historical misinformation and general snark magnet? In the 1930s, public art served as a useful project for the Works Projects Administration (WPA), a Depression-era government initiative to employ people in the United States in jobs that benefited the nation. According to the Library of Congress, the WPA employed 8.5 million people beginning in 1935, on 1.4 million projects2. Thanks to the WPA, America's post offices and other federal buildings are frequently adorned with murals and statues. Most of them are in the heroic style popular in the 1930s and also visible in the public art of the Soviet Union and fascist dictatorships during those same years. Tool-wielding workers and sturdy mothers are common figures, no matter what the political intent. The standard of execution is not uniformly high.

The 21st-Century observer is sometimes puzzled by encountering this startling wealth of imagery while buying stamps or waiting for jury duty. In 2019, the following remark appeared on Twitter, tweeted by a screenwriter:

Reminder that the Los Angeles federal courthouse has a statue of Abraham Lincoln where he's a shirtless young stud suggestively tugging at his waistband like a Sports Illustrated swimsuit model.
– Zack Stentz (@MuseZack) February 20, 2019

Twitter responded enthusiastically to the discovery, offering new epithets for the work: 'Babe-raham Lincoln', 'Honest Abs', even 'The Gettysburg Undress'. The story, as they say, went viral. What was the story behind the statue? Was there some special meaning to the shirtless Abe Lincoln?

March 27, 1861
Soon afterwards there entered, with a shambling, loose, irregular, almost unsteady gait, a tall, lank, lean man, considerably over six feet in height, with stooping shoulders, long pendulous arms, terminating in hands of extraordinary dimensions, which, however, were far exceeded in proportion by his feet. ...above that, nestling in a great black mass of hair, bristling and compact like a ruff of mourning pins, rose the strange quaint face and head...of President Lincoln.
...A person who met Mr. Lincoln in the street would not take him to be what – according to the usages of European society – is called a 'gentleman;' and, indeed, since I came to the United States, I have heard more disparaging allusions made by Americans to him on that account than I could have expected among simple republicans...
– William Russell, Times of London

Abraham Lincoln was not considered physically beautiful by his contemporaries. In fact, he grew a beard shortly before his inauguration because a little girl named Grace Bedell suggested that with a beard, he 'would look a great deal better for your face is so thin.' Lincoln himself was not deluded on the score of his appearance. When accused by his political opponent of being two-faced, he is said to have replied, 'If I had another face, do you think I’d wear this one?' On the other hand, Lincoln was definitely tall and physically strong. In his youth, he was considered the best wrestler on the frontier, and he earned his living in his teens as a day labourer on farms.

The reason a statue of a young, muscular, shirtless Abraham Lincoln startles Americans is probably due to the iconography of the past 150 years: Lincoln's face is, after all, on both the penny coin and the $5 note, bearded and grave as befits an historical figure of great eminence. His Memorial looms above the National Mall in Washington, DC, with a giant seated figure of Lincoln ensconced among the Greek columns and scrollwork. If standing, that Lincoln would be 8.5 m tall3. The Lincoln of the Memorial bears a facial expression that is both grave and kind, suitable for his role in the American political pantheon as the first martyr president. The 21st Century is used to this Lincoln, not a sexy young fellow. What gives?

In response to the furor over 'the sexy Lincoln statue', the Smithsonian's magazine waxed eloquent on the subject of kalokagathia, or the Greek ideal which 'conflated athletic beauty with an equally appealing soul...4'. But how much was this statue's beauty a statement about Lincoln, if at all?

The Lincoln statue was a WPA project, remember? Commissioned by a government agency tasked with keeping people working and incidentally decorating public buildings? In 1939, the WPA accepted anonymous entries to a competition for the commission to erect a statue for the lobby of the Los Angeles Post Office and Courthouse building. James Lee Hansen, a 23-year-old art student from Fresno, California, entered his plaster model at the last minute. His design, called 'Young Lincoln', was awarded the $7,200 commission. The statue, made of Indiana limestone, was displayed at the 1939 New York World's Fair and installed in the Los Angeles post office in 1941.

Hansen was asked by curious journalists why he had chosen to depict Lincoln without shirt or shoes. His reply? 'Well, from a sculpturing standpoint, it’s better to show the body without any clothes. That’s why I left 'em off5'. Who was the model? Hansen himself, as proven by a Life magazine article supplied on Twitter by Jennifer Jordan.

What Happened to Everybody?

The commission was apparently a mixed blessing for the young sculptor. With his prize money Hansen bought a car, which he subsequently crashed. For reasons not clear from the reportage, he then spent 18 days in jail. The Lincoln statue was only Hansen's second sculpture, which is amazing in itself. Oddly, there appears to be no public record of any further work from this artist. There is another James Lee Hansen, also a sculptor, but that Hansen was born in 1925, in Oregon, and specialises in abstract pieces on mythological themes. Even Twitter has failed to unearth further evidence of artistic activity for the sculptor of 'Young Lincoln'.

Lincoln's image may never be the same, but then, it is an evolving legacy. A few more people have learned the word kalokagathia, and some government archival websites have experienced a surge in traffic. As for screenwriter Zack Stentz, he has enjoyed a brief but no-doubt heady ride on the rollercoaster of fame:

Zack Stentz
@MuseZack Feb 21
'Hey mom, I'm in Time magazine!...For what? Well, uh, for, um...tweeting about a sexy statue of Abraham Lincoln...Mom, are you there? Mom? Yeah, I'm disappointed in me, too.'

The what3words locator for this statue is ///locate.pinch.poems.